Review: TUTS’ ‘Ain’t Misbehavin’ at the Hobby Center is a wild joy 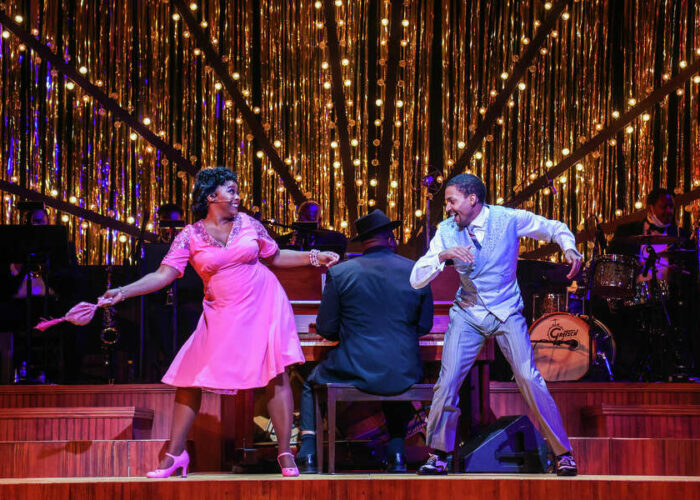 Oh, to be a fly on the wall at Harlem’s great Renaissance nightclubs such as the Cotton Club and the Savoy Ballroom. “Ain’t Misbehavin'” is as close as it gets, though it (almost) misses the clouds of cigar and cigarette smoke.

On stage at the Hobby Center until October 2, Theater Under The Stars’ new production of the 1978 cabaret-style revue is a relentless play that revisits the music of jazz great Thomas “Fats” Waller. Its 30 or so songs fly by at the speed of a hummingbird, and if they don’t all land, enough for the most forgettable to evaporate as soon as the next hot lick hits the air.

Conceived by Richard Maltby Jr. and Murray Horwitz, “Ain’t Misbehavin'” was staged by the Manhattan Theater Club on the Upper East Side and quickly jumped to Broadway, where it won three Tony Awards and contributed to boost the careers of its actors. , including Nell Carter, Irene Cara and André DeShields. A precursor to the modern jukebox musical, it’s also a throwback to the vaudeville palaces where Waller honed his chops. The pianist is a fundamental figure in the development of jazz (Count Basie was among his students), and was as well known for his wisecracking patter as his ivory tickling skills. Think of a potent combination of Groucho Marx and Jelly Roll Morton.

Housed in a well-appointed Jazz Age saloon, the stage awash in woodsy and golden hues, the TUTS production is a period piece that beats with the energy of 2022 thanks to the direction of Monique L. Midgette and the talented ensemble of ‘Ashley Tamar Davis, David LaMarr, Paris Bennett, Will Mann and Melrose Johnson. (Oddly, the Playbill lists the characters’ names for the performers, but they use each other’s real names on stage. Needless to say, there’s no plot to speak of.)

The cast’s crackling chemistry and Courtney D. Jones’ lithe choreography light up dashing ensemble numbers, including “Handful of Keys,” “Spreadin’ Rhythm Around,” and “The Joint Is Jumpin’.” We almost expect Duke Ellington or Ethel Waters to walk around to sit with the band. Dressed to perfection in sleek suits and pastel dresses, including the extras seated at tables at the foot of the stage – George T. Mitchell made the costumes – the performers strut and strut across the stage, jumping on the upbeat and playful tunes by Waller.

“Ain’t Misbehavin’” leaves plenty of room for notable solo turns: Johnson’s flirtatious crooning on “Squeeze Me”; LaMarr smooths like an eel on “‘T Ain’t Nobody’s Biz-ness If I Do”; the painful blues of Bennett, former “American Idol” finalist, “Mean to Me”. Davis, a Houston native and former Prince protege, revealed some gospel-inspired hits on “I’ve Got My Fingers Crossed.” In pairs, Melrose and LaMarr enthusiastically battled it out on “That Ain’t Right”; Bennett and Johnson made “Find What They Love” a lark in pajamas; and Mann and LaMarr’s “Ladies Singing With the Band” brought the roar back to the Roaring Twenties.

A handful of numbers stand out: Mann’s hilarious expressions and snarky asides on “Your Feet’s Too Big” and LaMarr’s tour de force on “The Viper’s Drag,” a misty reefer ode in which he pokes fun at the scene. for several minutes while cradling a joint the size of a banana. The very serious anti-segregation song “Black and Blue,” a striking departure from the show’s otherwise unbroken frivolity, showcased the harmonious harmonies of the cast as they struck a solemn, almost existential note. It was sobering and captivating at the same time.

None of this would have happened without the efforts of true production MVP, music director Phillip Hall. His exuberant piano kept performers on edge, while his six-piece band – Sabri Anderson and Horace Alexander Young on reeds; trumpeter Rob White; trombonist Jarvis Hooper; bassist AJ Moyler; and drummer Vernon Daniels – kept the riffs spicy and the tempos tight. Their boundless good humor makes “Ain’t Misbehavin'” frothy and so much fun.

Chris Gray is a Galveston-based writer.