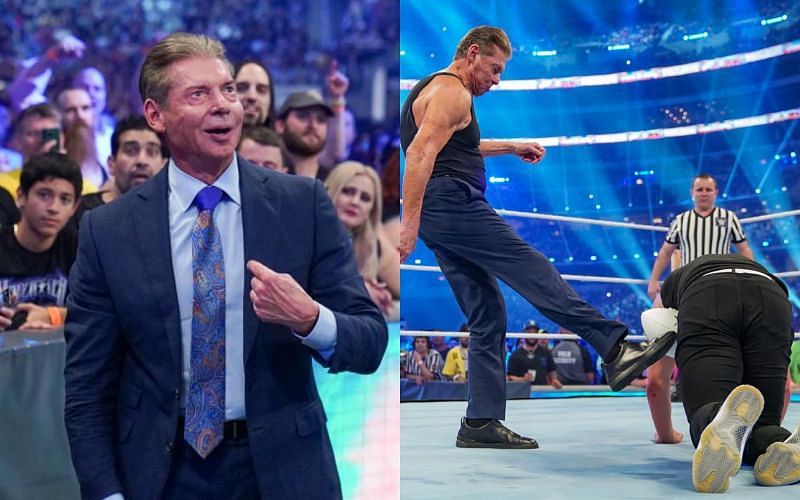 The segment kicked off with a singles match between Pat McAfee and Austin Theory. The two men faced off in a highly entertaining battle that ultimately ended in victory for McAfee. However, he went one step further by challenging Vince McMahon to a match which led to the WWE Chairman’s return to the ring after a decade.

McMahon beat Pat McAfee with a little help from Austin Theory. The latter recently revealed that female superstars teased The Chairman after he returned backstage. Theory also said he was proud to share this moment with his mentor and recalled how impressed everyone was with Pat McAfee. He discussed the details during his appearance on My Love Letter to Wrestling:

“It was really cool. When Mr. McMahon went to the back, everyone was yelling at him. There were a lot of female wrestlers, they were yelling at him and making fun of him. He was like, ‘Okay , Okay.’ I was proud, like being proud of your dad. Pat comes in and everyone was proud of what we did there and everyone appreciated it. You know it went well when everyone everyone in the back enjoyed it. It was awesome. Even days later and now, hearing so much about it, you know you created this WrestleMania moment, which is really cool to me.” (H/T Fightful.com)

While Vince McMahon competing in a match after ten years was thrilling, there was another surprise lined up. His celebration with Theory was cut short when “Stoner Cold” Steve Austin returned and hijacked the moment.

He delivered a Stunner on Theory, which flew off selling the shot. Austin then attacked Vince McMahon, who may not have done the best job receiving the Stunner but took one anyway.

Austin also appeared in his final WWE match at WrestleMania 38 when he defeated Kevin Owens in a singles match in the main event of Night 1. Fans loved Steve Austin’s appearances at WrestleMania, but took particularly loved seeing him silence his boss in his own way.

Read also
The article continues below

Did you enjoy Vince McMahon’s return to WrestleMania 38? Sound off in the comments below!

Q. Did you enjoy Vince McMahon’s return to WrestleMania 38?