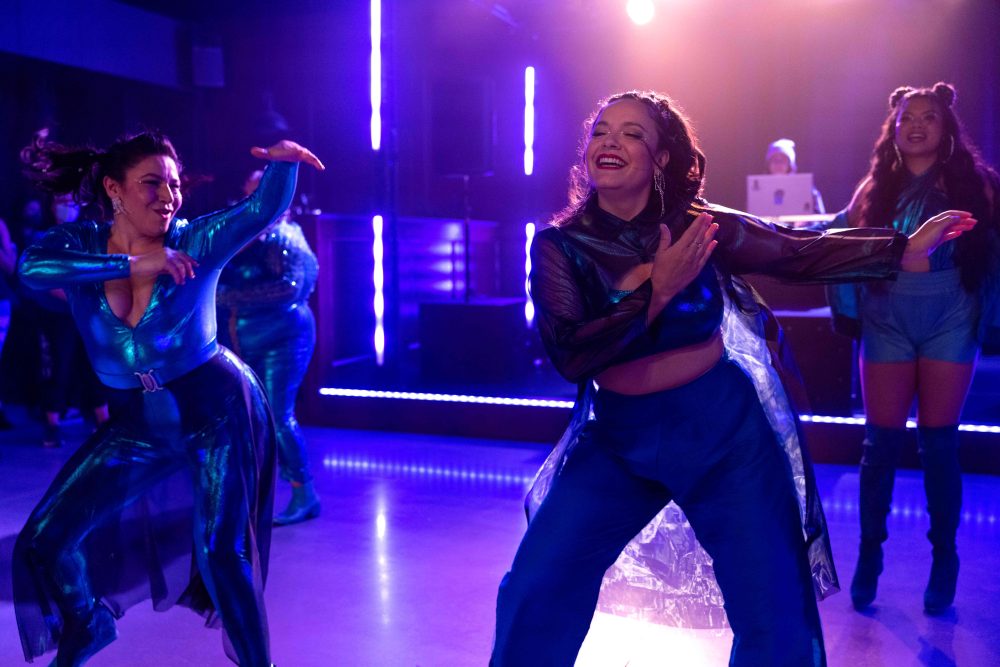 FX’s “Reservation Dogs” continues to be one of the funniest shows on TV, breaking new ground in storytelling with its largely Indigenous cast and crew.

It’s a depiction that Native Americans and non-Natives alike crave to see on television – multidimensional roles within the Native community.

This week’s episode, “Wide Net,” is written and directed by Indigenous filmmaker Tazbah Rose Chavez. It follows Sarah Podemski’s Rita, who goes on a girls’ trip with Bev (Jana Schmieding) and Teenie (Nathalie Standingcloud) to the Indian Health Services Conference, and their attempts to catch men and do bust moves. on the conference dance floor.

The episode is a game-changer for audiences in terms of spotlighting its female cast, Schmieding calling it a celebration both on-screen and off-screen: “It was hugely freeing because as a big woman, I never have the opportunity to use my body on screen or on stage. It is a beautiful meditation on the resilience and enthusiasm of Indigenous brotherhood.

Standingcloud adds, “This is a dream come true for all of us. I can’t wait to show this to my grandkids and tell them, “Look what I was doing before.”

Talk with Variety, Chavez discussed the significance of the episode.

Let’s talk about the dance floor scene where the ladies are dancing to Brandy.

I don’t know, just one Rez Girl who grew up in the 90s and didn’t go out with her boombox to listen to Brandy, TLC and all the girl groups. We invented routines and we dressed like them. We would be in our rural communities with our boomboxes, and that’s what cold open is – it pays homage to that time in our lives. It’s a recreation of memories I have with my neighborhood cousins.

Later in the episode, they live out their girl group fantasy. It’s their way of getting back together and showing their friendship despite losing Cookie. Every generation of Rez Dogs has had someone they’ve lost and they’ve dealt with it in different ways. So for these women, when they’re in the club, and when they come out, it’s their tribute to Cookie and the ultimate thing to let go. If I couldn’t be a mom, if I couldn’t be a receptionist, and if I couldn’t have responsibilities, I’d be in a girl group.

Can you talk about the discussions you had about what was important to show in the episode?

We always knew going into season 2 that we wanted to do a night out with aunts and [see] who are these women outside the rez. In the writers room, we thought about where this might take place, and because they work in an Indian health clinic, there are these conferences that take place. We love conferences – it’s our Vegas and our Cancun.

It was great to have the other writers in the room, Devery Jacobs and Erica Tremblay, who helped create this. But when it came to directing and performing, for me, I wanted people to see our joy and our humanity as women and people who love to dance, who love to make love, who love to hang out, who are funny, who sometimes drink, who sometimes eat. It is reality. That’s not to say that all aboriginal women are, but so far in our representation we haven’t been able to be. We couldn’t be free, be funny, make mistakes and spray our vaginas. It’s who they are. We have our cultural aspects, we have our traditions, but this is a major way of uniting us in our brotherhood.

What does it mean to have the episode out there and for the world to see?

I feel really excited and proud of all the writers, actors and all the departments that contributed to this. For me, the important thing is to see our joy, our laughter and our agency as women. One of the plots in there is that Rita doesn’t choose a man. In the end, she chooses her sister and she chooses her cousin. We always talk about coming from matriarchal societies, and we have such a hard time with patriarchy. I feel like as a native woman, I like an episode where there’s no man at the end.

This episode, to me, is a historic moment in a historic show, where we pull the blanket back on who Indigenous women are. I don’t think people realize how funny we are. I hope it changes our context in America, and not just in the mind of America but globally, about who we are. I also hope that within the industry it changes the perception of casting and storytelling and that these are the kinds of stories that can be told by Indigenous women, performed by Indigenous women and directed by Indigenous women, and that these stories are viable and interesting outside of a non-Indigenous audience. I hope this brings a lot of change and a lot more opportunity for Jana, Tamara, Sarah and Natalie, and that they can continue to be chosen for bigger projects. Someone put them in a musical.