What is a laureate? A classics teacher explains the roots of the word in ancient Greek 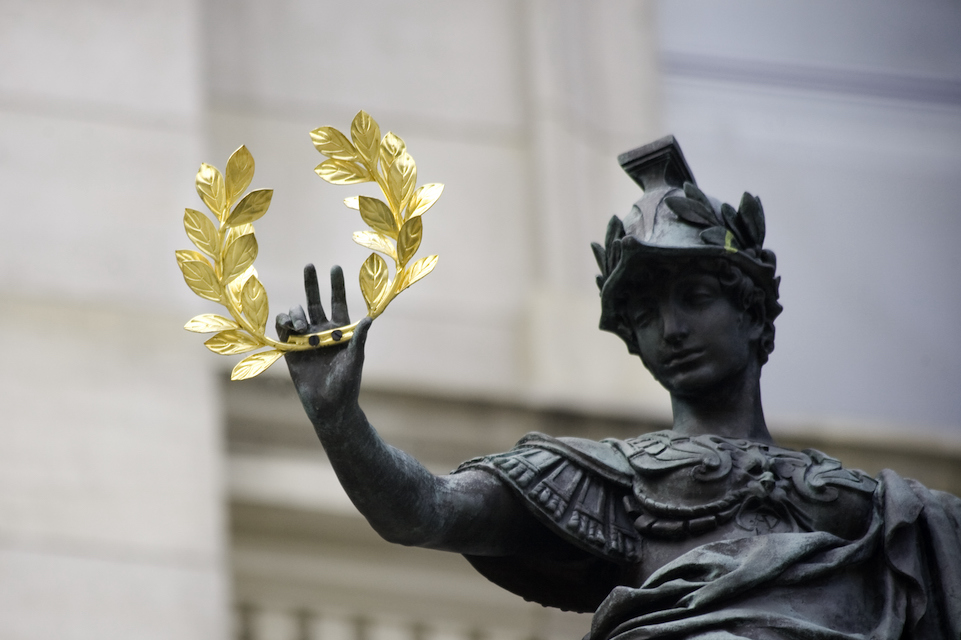 What is a laureate? A classics teacher explains the roots of the word in ancient Greek

A statue with a gold laurel wreath

Professor Joel Christensen is the chairman of the department of Classical studies at Brandeis University. This article originally appeared on The conversation.

When the Nobel Prizes are awarded each year, the winners each receive a medal and a cash prize. Even in the absence of these material possessions, the honor of being a Nobel laureate persists in one’s name or title, as a heroic epithet to recognize a lifetime’s achievement.

Each year, I join my colleagues in the arts and sciences in congratulating the winners and all they have accomplished. As a scholar of classical studies, I also reflect on the journey of this strange word, laureate, and how deeply it names those who receive it.

The English word ‘laureate’ dates back to the 15th and 16th centuries, when it came almost straight out of the Latin ‘laureatus’, an adjective to describe a person crowned with a wreath of laurel leaves. But the history of the laurel as a symbolically important plant goes back thousands of years.

A useful plant native to the Mediterranean

The laurel is one of many small bushes and trees originally found in the Mediterranean. Some varieties reach dozens of feet tall, often marked by smooth, sometimes wavy leaves with various colored berries and flowers. Many people will recognize the long, aromatic, bay-green leaves, a popular spice in a range of cuisines.

The laurel was a useful plant, part of a long tradition of using the gifts of the natural world to treat human illnesses.

The Romans had a variety of medicinal uses for the plant. They applied its leaves to snakebites and ingested them as an emetic. They prepared the plant with its berries in various cold remedies.

The Greeks used Noble Laurusor “bay leaf”, as a remedy for rashes caused by other plants and boiled it for antiseptic and first-aid applications.

But the use of wreaths made from laurel sprigs emerged for different reasons.

A plant related to Apollo

While “laurus” is the Romans’ word for the cultivated plant, the idea of ​​being crowned or crowned with laurel probably came from the Greeks. They associated this plant, which they called “daphne”, with ritual purification and divine inspiration.

Worshipers of the god Apollo considered the laurel to be sacred, as the place for the god’s oracular pronouncements. In some traditions, the Pythia – the priestess who delivered oracles at Delphi, one of the holiest sites in the early Greek world – chewed bay leaves, potentially hallucinogenic, before speaking a prophecy.

The origin story of Apollo’s love of the laurel tree is more menacing. In Roman poet Ovid’s “Metamorphoses”, Eros – Cupid to the Romans – sought to punish Apollo for mocking him, so he made him fall in love with a young nymph, Daphne.

She shunned his repeated – and violent – ​​advances and begged her father, a river god, to help her. He turned his daughter into a laurel. Daphne shunned Apollo in his human form, but she could not escape becoming his sacred property.

Although this story explains the laurel as the sacred plant of Apollo, its medicinal or imaginary mind-altering effects may be better explanations for the tree’s association with Apollo, a god of medicine, prophecy, and the poetic arts. .

The Greeks held the Pythian Games at Delphi every two years after the Olympic Games. By the time they were established in the 6th century BC in honor of Apollo, the laurel was sufficiently linked to the god to be offered as a prize to the victors.

These games, unlike the Olympics, began with singing, poetry, and dancing competitions, and later evolved to include athletic competitions. Laurel’s function as a prize honoring Apollo and a marker of poetic power is why the laureate crown was adopted to honor poets and men of letters in the early Renaissance.

The story of “laureatus” has some additional twists. The ancient Greeks suspended violent conflicts to organize their annual competitions. This tradition may be the reason why the Romans used the Laurus Delphica – the laurel native to the sacred site of Delphi – as a symbol of peace. They adorned victory announcements called litterae laureatae (“laureate letters”) with laurel wreaths.

In higher education, the word “baccalaureate” retains the meaning of laureate as someone who is honored or has achieved something. The term is synonymous with baccalaureate and comes from a medieval Latin word.

The custom of applying the word “laureate” to a Nobel laureate, however, may be younger than the award itself. The Oxford English Dictionary documents the first description of a Nobel laureate in this way which occurred in 1947.

Despite the relative youth of the phrase, the history of the word lends a deeper meaning to the title. As an ancient symbol of medicine, the arts, and the end of war, the laurel certainly matches Nobel’s honor for achievement in medicine, physics, chemistry, literature, economics, and the most fragile of hopes, the peace.