What happened to Anne Boleyn

King Henry VIII remains one of England’s most famous kings. His nearly four-decade reign marked a time of enormous change for the country, and complications from his line of succession would continue to rock the foundation of the monarchy for years after his death. And yet, if there’s one thing Henry is best known for in the public mindset today, it’s his wives, six of them, to be precise.

Henry’s queens have been the subject of movies, books, TV shows and Broadway plays, but even among them one stands out above the rest and continues to capture our imaginations: Anne Boleyn.

Even in her day, Anne was a divisive character, and the years have done nothing to stop speculation about her true character and true motives. To some, she was a ruthless manipulator, seducing her way to power no matter the cost. For others, a misunderstood young woman; a pawn making the most of a circumstance in which she found herself trapped.

With The Boleyns: A Scandalous Family debuting on PBS August 28 (8 p.m. EST), we take a look back at one of history’s most famous queens.

Like many details of her life, the exact year of Anne’s birth is unknown, although she was probably born in the first decade of the 1500s. One of Sir Thomas Boleyn’s five children, a courtier, and Elizabeth Howard, she spent much of her early childhood at Hever Castle in Kent. As a teenager, Anne accompanied Henry VIII’s sister, Marie, to France, where the princess married Louis XII in 1514.

By 1522 Anne had returned to England, where she was living at the court of Henry VIII, probably meeting the king during this time. Although few contemporary accounts of Anne survive, she was generally portrayed as a dark-haired, dark-eyed beauty, and she won several suitors, including the poet Thomas Wyatt and Lord Henry Percy. In fact, Cardinal Wolsey intervened at the request of Henry VIII to prevent a marriage between Anne and Percy. 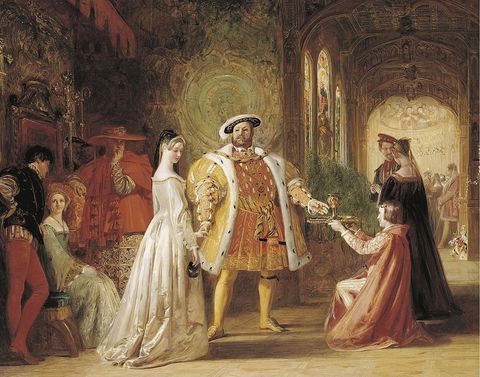 As with many things in Anne’s life, it is unclear exactly when her romance with Henry VIII began, as a number of undated letters from Henry indicate the King’s growing infatuation. (No letter from Anne has survived.) Although the matter is debated, many historians believe that, despite Henry’s apparent ardor, he and Anne did not begin a sexual relationship until they were married.

By the mid-1520s, Henry was apparently becoming disenchanted with his marriage to his first wife, Catherine of Aragon. The couple had produced only one surviving child, a daughter, Mary Tudor, and without a male heir, Henry – whose father, Henry VII, had only come to the throne during the Wars of the Roses – feared for the succession. . Henry VIII had married Catherine, a Spanish princess and his brother’s widow, on Catherine’s assertion that she had Arthur had never consummated their marriage. In time, however, Henry began to doubt her claims and seems to have suspected that their failure to produce a male heir was a punishment from God.

In 1527 Henry VIII began seeking an annulment from Catherine so that he could marry Anne and any children they had together would be the rightful heirs to the throne. Pope Clement VII refused to grant the annulment, but nevertheless Henry dismissed Catherine in 1531 and secretly married Anne in January 1533 (they did not publicly announce the marriage until Easter.) Henry asked the Archbishop of Canterbury to declare his marriage to Catherine null and void. in May of that year, and Anne was officially crowned queen in June. In September, she gave birth to a daughter, the future Queen Elizabeth I.

Driven by his desire to marry Anne, Henry succeeded in passing a series of acts which separated England from the religious authority of the Roman Catholic Church and, in 1534, made the monarch of England the official head of the Church of England. 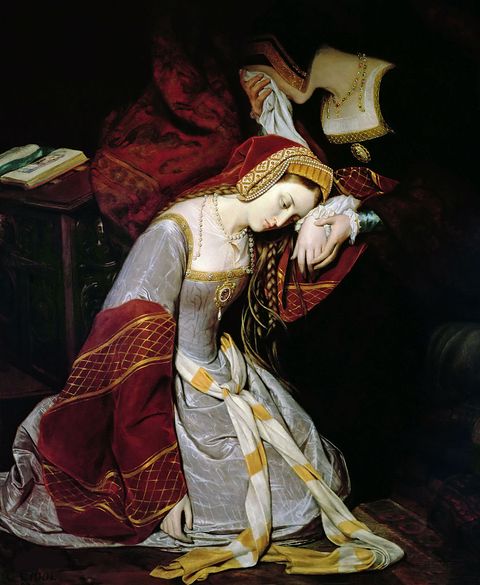 Anne Boleyn spent her last days as a prisoner in the Tower of London.

Despite the passion that had characterized their association, all was not marital happiness for Anne and Henry VIII. Anne was not popular with Henry’s old regime of courtiers (the new queen was often accused of being more French than English, with her affinity for French fashion and the French language) and the rising power of his family led to many grudges at court.

After the birth of Elizabeth I, Anne suffered a miscarriage in 1534 and gave birth to a stillborn son in January 1536. Their marriage, and the religious reforms that led to it and followed it, created political tensions for Henry, and the continuing lack of a male heir soon eroded his affections for Anne, and eventually his attentions began to turn to one of his ladies-in-waiting, Jane Seymour.

On May 2, 1536, Anne was committed to the Tower of London for adultery, conspiracy against the king and even incest with her own brother. Although most historians agree that Anne was probably innocent of the crimes she was accused of, she was nevertheless convicted unanimously by a court of the peerage. She was executed by beheading on May 19, 1536.

Although a mob was present at the time of his death, reports varied widely on many details, particularly his last words, which became a source of speculation for centuries. Commonly paraphrased for saying something like “I didn’t come here to preach, I came here to die”, contemporary accounts vary wildly in wording and even in the sentiment behind them. Indeed, the one thing that most contemporary accounts seem to agree on? That Anne refused to admit her guilt until the end.