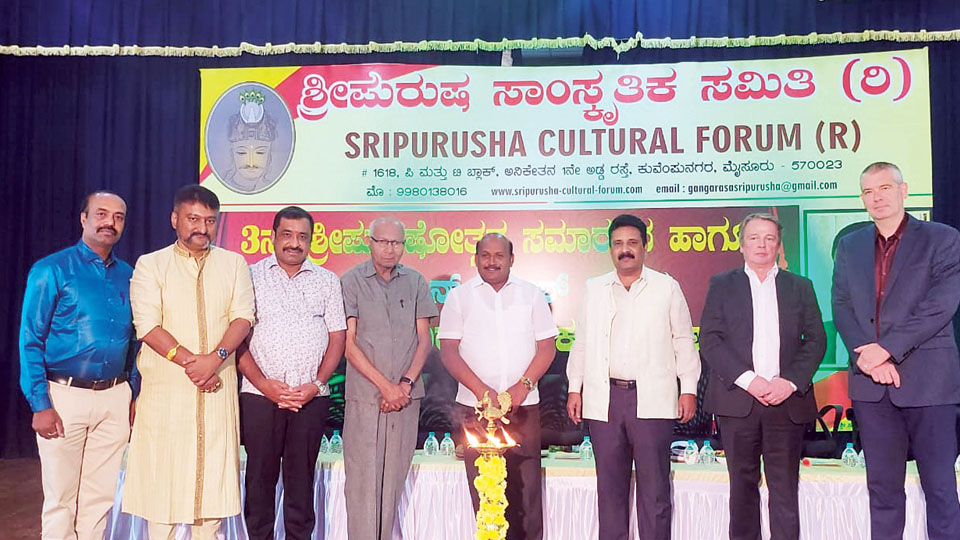 Mysore/Mysore: Claiming that it was the rulers of the Ganges who laid the foundations of Kannada literature, veteran writer Dr. CP Krishnakumar (CPK) declared Raja Durvineetha to be Kannada’s first poet.

He was speaking after releasing the English edition of Dr BN Raveesh’s work from MMC&RI Faculty titled “Samrat Sripurusha” during a program organized by Sripurusha Samskrutika Samithi (Sripurusha Cultural Forum) marking the third Sripurushotsava, in the Rani Bahadur Auditorium here on Sunday.

Pointing out that Durvineetha’s prose and poetry written in Sanskrit and Kannada have not yet been revealed, the CPK said the collection of materials should be done. Lamenting that historians and writers have limited themselves to writing biographies and autobiographies, he insisted on the need to broaden the horizons of the history of languages ​​through more research.

Historian Dr. Talakadu Chikkarangegowda, who lectured on Sripurusha, said that the era of Sripurusha under the rulers of the Ganges was a golden era, during which the kingdom spread all the way to Tamil Nadu. Sripurusha had formed a 25-member team to monitor farming activities and the irrigation network, he said, adding that this paved the way for an agricultural boom.

Maintaining that Sripurusha ruled the kingdom for 62 years, he said the ruler’s memorial is at Mudukuthore. This memorial must be renovated for posterity, he added.

MLC CN Manjegowda wanted the publication of more books on the Vokkaliga community and the history of the leaders belonging to the community. Emphasizing the need to install a statue of Sripurusha, the MLC announced that it would donate Rs.10 lakh for the statue. If necessary, he will also make efforts to obtain a CA site from MUDA to carry out cultural activities, he added.