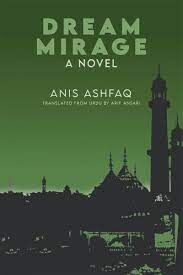 Umrao Jan Ada is a novel published in 1899 by Mirza Hadi Ruswa. It is the first novel in Urdu. Ruswa writes about a courtesan and poet called Umrao Jan who lived in Lucknow in the 19th century.

Or did she? The story told by Ruswa is so spellbinding that people still wonder if Umrao Jan was real or just a figment of the writer’s imagination.

dream mirage is the English translation of Khawab Sarab by Anis Ashfaq written in a language that would have been the pride of 19th century Lucknow Urdu poets. After all, Chowk, where most of the story takes place, is only a stone’s throw from Mir Anis’ house. Anis is the master composer of elegiac odes to the martyrdom of the fifth Imam, Husain and his companions at the Battle of Karbala.

In the novel, the author resuscitates the memory of Umrao Jaan which continues to afflict many townspeople even more than 100 years later. The author teases the reader by embarking on a 460-page journey to learn more about the courtesan and for once makes Umrao Jan even more mysterious than she already is.

According to 90-year-old Syed Muhammad Naqi, one of the many characters in the novel, everyone talked about Umrao Jaan in Lucknow but few had met her. He never met her but was told that she lived in a house on Phatak Haider Husain.

Naqi remembers Ruswa. The author regularly visited the Tehsin Ali Khan mosque. Naqi should know because he is the guardian of the same mosque. Before him, his father took care of the mosque and it was then that Naqi saw Ruswa for the first time in his childhood. When Naqi was older, he realized that Ruswa was the same person who wrote the famous novel called Umrao Jaan. Everyone in the neighborhood knew about the novel, including Naqi.

“Who doesn’t remember? If you read it once, you remember the sentences verbatim. The mullahs and maulvis also read it in secret. So they were all in all of that,” Naqi said pointing to his mosque to add that Tehsin Ali Khan Mosque in Lucknow is famous for its particular style of construction.

Besides offering prayers, a large number of people came to the mosque as well to participate in poetry recitations throughout the night. The most colorful evening took place on the anniversary of the birth of Muhammad, the prophet of Islam.

From the walls of the courtyard of the mosque, the old quarter of Phatak Haider Husain was still visible. It is believed that a Munshi Ahmad Husain had his house here where a room was rented from Umrao Jaan and from where the courtesan told the story of her life to the author behind a curtain.

Naqi pointed to the arches between the inner chamber and the outer courtyard of the mosque which are beautifully adorned with fine floral carvings and calligraphic inscriptions. Above the median arch, on a marble slab, is inscribed a Persian rubai, a poem in quatrains.

The mosque was built by Tehsin Ali Khan, chief court eunuch of Shuja Ud Daula, the third nawab ruler of Awadh. Tehsin was a Hindu khatri by caste and his name was Bhola Nath. In the time of Asafudaula, fourth nawab of Awadh, he came to Lucknow from Faizabad and was appointed darogha, a senior police officer.

Bhola Nath renamed itself Tehsin Ali Khan and built a magnificent mosque which still stands. He cared for the poor and added a guesthouse behind the mosque for weary travellers.

This is the mosque where the greatest Urdu poet Mir Taqi Mir often sat. He would sit on the steps of the mosque to compose poetry after leaving the prestigious job he had held for a time at the court of Asafudaula. He complained that his employer was too distracted to concentrate on the poetry he recited.

The tawaif or courtesans had lived in the same neighborhood as the mosque. Many gentlemen, including Ruswa, had visited Umrao Jaan at his house in Phatak Haider Husain. After each encounter with Umrao Jaan, Ruswa would pass by the Tehsin Ali Khan Mosque to say his prayers before returning home.

Naqi, 90, recalled that at that time the terraces flourished with the best dancers and the best instrumentalists. They were very neat ladies who stayed behind curtains draped around the veranda. They would take out their baskets to buy goods from the peddlers who passed by, but there was no way you could spot even a single bracelet on their wrist.

It was in the past. The same Naqi saw the terraces become desolate once the British colonized Lucknow in 1856. Originally the dancers were from Lucknow or its surroundings. They would learn from local composers. There would be teachers appointed to teach them language and conversational etiquette. All were great conversationalists and always ready with an entertaining quip.

dream mirage talks about the time when Haji Murad Ali, founder of the mouth-watering tunday kebab, fascinated customers with how he was able to cut extremely thin slices of onions to perfection with an arm and a half. The chief was nicknamed ‘tunday’ because he had lost half an arm.

He was the most famous kebabi in town and fried minced meat patties dressed in a white two-pocket top and snow-white churidar pants. Her white hair was pulled back by a dupalli or two-layer skullcap embroidered on muslin.

The chief also had never met Umrao Jaan. He knew the courtesan from his father. Sometimes her father had received a special request from Umrao Saheb for a big party at her house. “‘Please send nargisi kofte today or today khatai kebab and yakhni pulao’ and my dear father would prepare these dishes with great interest and have them sent to him,” the Kebabi said. Whenever her father was called to the first-floor apartment where Umrao Jaan lived, she would greet him and have a conversation with him behind a curtain.

The father told him that he felt like flowers were falling from his mouth when Umrao Jaan spoke.

One day Umrao Jaan left the kotha. After that the kotha was a desolate place although Umrao Jaan returned to Lucknow many years later with a daughter. She lived in a place in another part of the Chowk neighborhood.

Learn more about how Lucknow used to be, whether Umrao Jaan and Umrao Begum are two or one and the same, and who Umrao Jan’s daughter is to pick up dream mirage in English, or Khwab Sharab in Urdu for a great read.