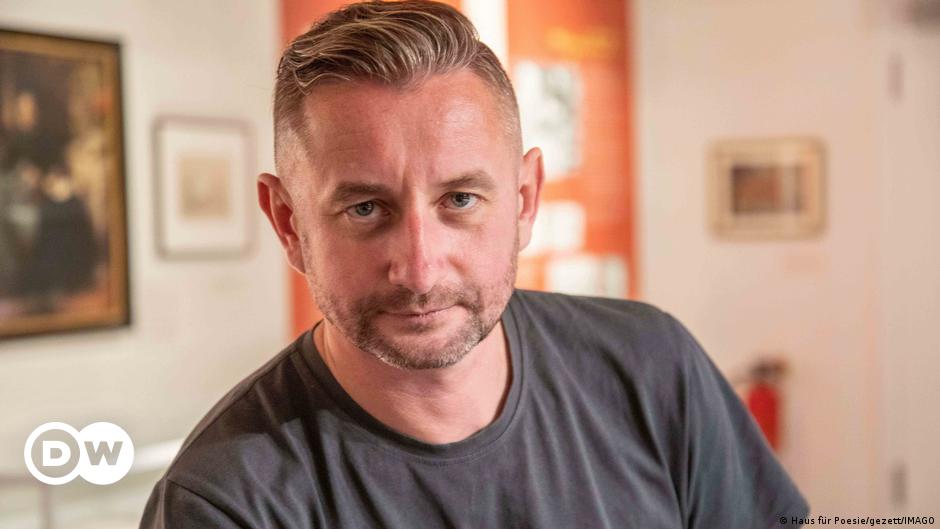 The German Association of Publishers and Booksellers has awarded the 2022 German Book Industry Peace Prize to Ukrainian writer Serhiy Zhadan.

“We pay tribute to this Ukrainian author and musician for his exceptional artistic work as well as for his unequivocal humanitarian position, which motivates him on several occasions to risk his own life to help those affected by war and thus attract more attention. on their fate,” said the jury of the prize.

In his novels, essays, poems, and lyrics, Zhadan particularly reflected on Russia’s initial 2014 invasion of eastern Ukraine, describing how the ongoing war destroyed people’s lives in the region.

It uses both “a poetic and sweeping tone” to also reflect on “how the Ukrainian people defy the violence around them, striving instead to lead an independent life rooted in peace and freedom”, added the jury.

In the city of Kharkiv, near the Russian border, where he lives, Serhiy Zhadan leads poetry readings in an underground metro station serving as a bomb shelter.

“A person cannot live with war alone,” Zhadan said of the shelter in April. “It’s very important for them to hear a word, to be able to sing, to be able to express a certain emotion.”

Born in 1974 in Starobilsk, Luhansk Oblast, in the former Soviet Republic of Ukraine, the novelist, poet, essayist and musician sets his stories primarily in the city of Kharkiv and eastern Ukraine.

Although he was brought up in a predominantly Russian-speaking environment, he writes in Ukrainian.

He studied literature, Ukrainian and German studies at the University of Kharkiv and in the 1990s published his first poems and anchored himself in the cultural life of Ukraine’s second largest city by organizing literary and musical festivals.

In 2004, Zhadan’s first novel “Depeche Mode” was published in Ukraine (the English edition was released in 2013), in which he depicted the upheavals associated with the post-Soviet era in his native country.

In 2014 he received the Ukraine BBC Book of the Decade award.

Having participated in the pro-European Maidan protests in 2013, Zhadan’s latest novel, “The Orphanage” (Ukrainian edition, 2017; English edition, 2021), looks back on the war in Donbass in eastern Ukraine after 2014 – a region that is the center of the Russian invasion today.

The story of a teacher who must negotiate the fog of a war zone to pick up his nephew from school, the novel is an allegory of an apocalyptic Ukrainian frontier forever threatened by Russian aggression.

“The Orphanage” won first prize for German translation at the Leipzig Book Fair in 2018.

An artist and activist

Besides writing, Zhadan translated poems by Paul Celan and Charles Bukowski into Ukrainian, and wrote songs and sang for rock bands. His band Sobaki v kosmosi (Dogs in Space) toured Ukraine’s war zone and played for soldiers after Russia invaded Crimea and Donbass in 2014.

He also helped organize humanitarian aid for people caught in the crossfire.

Today, he continues to rescue residents of war-ravaged neighborhoods, distributes relief items and organizes concerts in the besieged city of Kharkiv.

He often talks about the importance of victory for Ukraine. “Defeating the Ukrainians would mean that most of us would simply cease to exist,” he told DW in April.

Although his writing is known for its surreal elements and ironic tone, his experience in war zones has imbued his work with journalistic and documentary precision.