The story of Hazrat Krishna has captivated Muslim writers and historians 
The love story of Radha and Krishna is famous. Krishna is believed to be an avatar and his story is repeated in private and public gatherings. His teachings to his friend Arjuna on the battlefield of Kurukshetra are summarized in the “Bhagavat Gita”. Gita is one of the most pragmatic guides to life and its struggles. Interestingly, Krishna Bhakti is not limited to Hindus; Muslim poets, writers, kings and philosophers respect him and have written about him.


The story of Krishna emanates from the ancient battle epic “Mahabharata” which was originally written in Sanskrit. Its first translation was in Persian, and it was done at a time when the Quran had not yet been translated from Arabic. Much attention has been paid to the translation of the Mahabharata into Persian.

Translated versions of the Mahabharata, the story of the battle between the Kauravas cousins ​​and the Pandavas, have been available since ancient times; the battle is described in proverbial terms. During the war, Krishna offered his services as a charioteer to Arjuna. When Arjuna was faced with the dilemma of fighting against his relatives, Krishna gave him profound advice as to why he should not waver in the line of righteousness against evil personified by the Pandvas and how his action is in the greatest good of the world.


An illustration on the scene of the battle of the Mahabharta


The Mahabharata is a holy book for Hindus and since Akbar believed in religious tolerance and inclusiveness and knew that keeping his Hindu subjects happy is good practice to perpetuate his rule, he had to translate this book for political purposes . It is also possible that the Persian Mahabharata stories about the women of the harem and the banquet of the nobles were invented to appeal to the nobles, who were unfamiliar with Sanskrit and the cultural moorings of the Mahabharata.


During Akbar’s time, books translated from Sanskrit into Persian included the Mahabharata, Ramayana, and Upanishads.


In total, about fifteen books were translated from Sanskrit into Persian by the order of Akbar. The Persian translation of the Mahabharata was done by expert calligraphers and painters; the latter participated in the creation of magnificent and captivating illustrations for each chapter.


In 1582 Akbar ordered Badayuni to translate the epic. He had finished it in four years. Badayuni was assisted by a group of calligraphers and painters who embellished it. The first copy was illustrated by Mushfiq, later many copies were made, one of which was later found in the possession of Raja Swai Man Singh II of Jaipur. This is safely displayed in the City Palace Museum, Jaipur even today.


Akbar sent a copy to Abdur Rahim Khan Khanan and other courtiers and nobles also received copies of Razamnama as gifts.


Khan-i-Khanan was a learned and friendly person and his library contained all the important books, so the king also sent a copy of each book for safekeeping. Khan-e-Khanan was a broad-minded Muslim and had a special devotion to Shri Krishna, which he expressed in his Hindi poems. Rahim studied Mahabharata, Ramayana and other Hindu religious books. 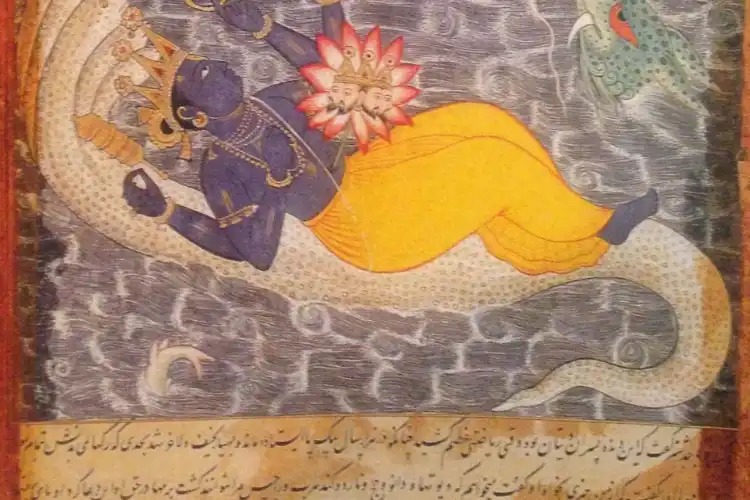 The Mahabharata, the story of the battle between the Kauravas and the Pandavas, has been prevalent in the vernacular since ancient times, and the battle is described as proverbial. During the war, Shri Krishna performed the service of Arjuna’s charioteer and in the meantime Krishna gave Arjuna a lot of advice including the Bhagavad Gita. did


As Akbar believed in religious tolerance and wanted to keep Hindus happy, he had to translate this book for political purposes. It is also possible that the Persian Mahabharata stories about the women of the harem and the banquet of the nobles were invented to appeal to the nobles, who were unfamiliar with Sanskrit and the cultural moorings of the Mahabharata.


During his time, the books he translated from Sanskrit into Persian to Akbar were Mahabharata, Ramayana and Upanishads.


The Persian translation of the Mahabharata was done by expert calligraphers and painters; the latter participated in the creation of magnificent and captivating illustrations for each chapter.


Some historians believe that before the Mahabharata was translated into Persian, it was translated into Arabic. An Arabic translation dates back to the 11th century AD and is available in a library in France. It was done in 1026 by order of a princess and the name of the translator was Abu Salih. Originally, the Arabic translation was made available in the city of Jurjan in Central Asia, informed by the librarian Abul Hasan Ali.


In 1845, a French translation of the Mahabharata was published for the first time, not from the Sanskrit, but from the Arabic manuscript. How did the Arabic translation of the Mahabharata happen in the 11th century AD, when the Muslim Empire in Delhi had not even been established at that time? It is difficult to get an exact answer to this question, but during this period there were many small states of Muslims in Sindh and a large part of the Jats who lived in the Arabian desert, in such a case there is no is not surprising that the translation from Sanskrit to Arabic. 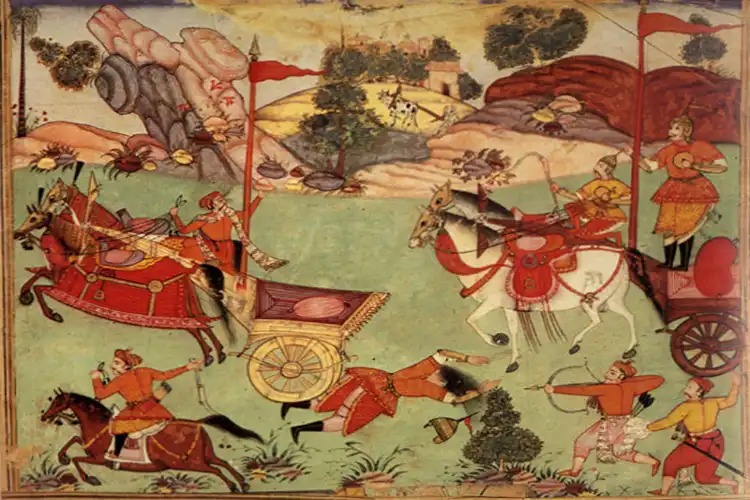 
Historians generally believe that the Mughal Prince Dara Shikoh was a Sufi and had a special attachment to Hindu sciences and arts. Historians have written about Dara Shikoh who translated the Bhagavad Gita into the Persian language. Prince also translated Yugvashishtha, Upanishad and Ramayana into Persian. He had translated 52 Upanishads under the name “Siriyakbar”.


Urdu language poets and artists are especially attached to Krishnaji. Shah Muhammad Kazim Qalandar Kakurvi and Shah Tarab Ali Qalandar were Sufis and poets. He described Shri Krishna in his poetry. Mohsin Kakurvi holds a prominent position among NAAT poets. He mentioned Janmabhoomi Mathura of Krishna in his Natiya Kalam (Muslim devotional songs) as a metaphor.


Nazir Akbarabadi presented the story of Krishnaji and the rituals related to it in detail in his poems.


A prominent name among these poets is Maulana Hasrat Mohani who was a great poet, freedom fighter and member of parliament. He reverently calls Krishnaji Hazrat Krishna.