The shadows of our forgotten ancestors 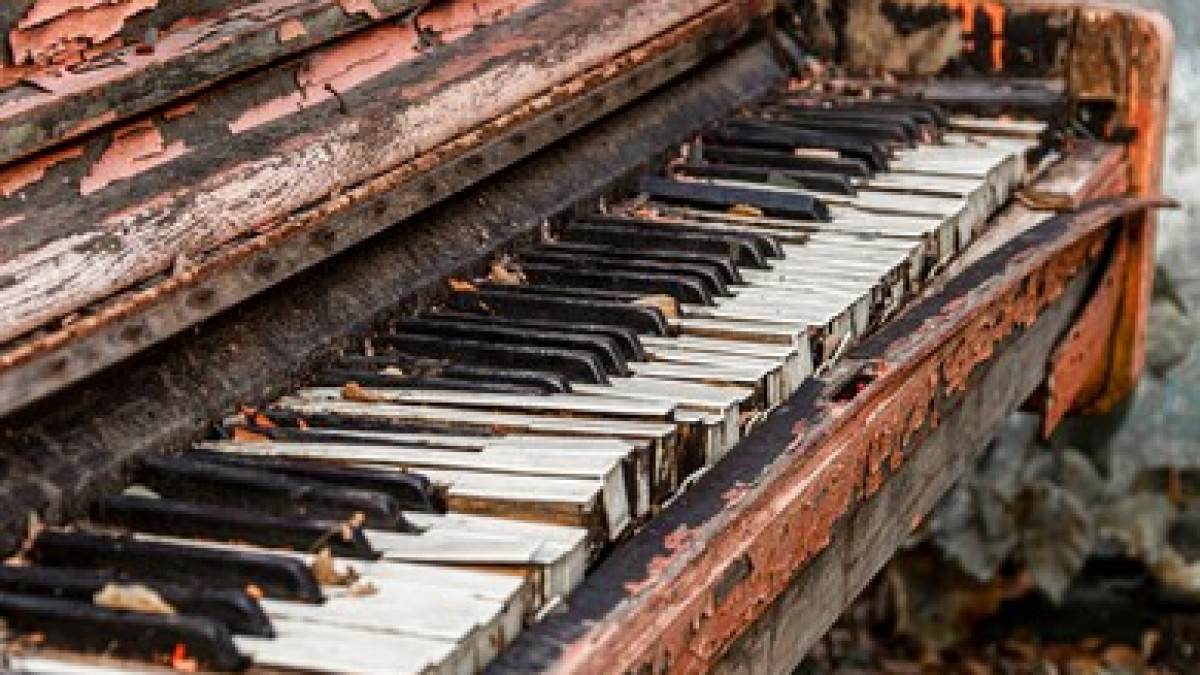 A quick Google search for Antonio Figueiredo reveals all sorts of results – from neurosurgeon to digital strategist. Only at the bottom of the search page does a link appear to the life and works of a musician by that name – a violinist from Goa who was in fact the first western classical conductor in the world. ‘India. Born somewhere near the village of Loutolim in South Goa, formerly known as Portuguese India, Figueiredo is an important but seldom talked about or written about figure in the cultural history of Goa.

The artist was immortalized a few years ago in a colorful mural on a street wall in Panjim, depicting Figueiredo in the middle of a performance, waving his wand as he read the score. The mural by Israeli-born artist Solomon Souza (grandson of famed modernist painter FN Souza) was one of a dozen such murals painted across the state, as part of the Mundo Goa project (during the 2019 Serendipity Arts Festival) curated by Vivek Menezes. .

The project, writes Menezes in his curatorial note, “…highlights the infinitely varied ways of being and belonging that artists, writers, intellectuals – and all who seek to belong to them – can derive from unique cultural scenario of this blessed city.slice of coast of Konkan…”

In a country as vast and diverse as India, culture and identity are not mutually exclusive, and our artists – painters and sculptors, poets and writers, dancers and musicians – have been the chroniclers and custodians of this heritage for so long. that we remember. . Whether it’s Sadat Hasan Manto’s heartbreaking stories on the score, Munshi Premchand’s tales of caste-based oppression, Amrita Sher-Gil’s visual narratives of picturesque Indian rural life, introspective novels by From Jhumpa Lahiri capturing the internal conflicts of contemporary times to Ranveer Singh’s incarnation of an underprivileged rapper from the Mumbai slums, our artists tirelessly document our past and present, for posterity.

Their role in shaping Indian society as we see it today has been as critical as that of politicians and leaders. And yet their commemoration, especially in terms of public statues or murals, pales in comparison to that of politicians. According to Shukla Sawant, an associate professor at JNU’s School of Arts and Aesthetics, decisions to erect statues or public art celebrating prominent figures are largely driven by electoral politics.

“There is a tendency to value political figures because of the electoral campaign, to ensure that a certain type of political imagination is concentrated in the public space”, explains the professor. “It’s more or less about trying to gain visual control over political ideological expression.”

The “feudal mentality” of Indian society could also be to blame for its dismissive attitude towards artists and their contributions, says historian and documentary filmmaker Sohail Hashmi. “The musicians, singers, dancers were called ‘bhand marasi‘. They are not considered people worthy of honor,” he said.

Unlike the West, where entire cities and airports are dedicated to artists, the number of statues or memorable iconographies of figures from the world of art in India can be counted at your fingertips. The statue of Thiruvalluvar at Kanyakumari, adjacent to the rock of Vivekananda, immediately comes to mind. The 133ft tall stone sculpture of the Tamil poet and philosopher who is best known for writing Tirukkural, an ancient Tamil text comprising three books, one each on virtue, wealth and love. The 38-foot-tall base of the statue is considered representative of the Book of Virtue, while the poet statue is symbolic of the other two values. The design of the statue is said to be meant to encourage people to achieve wealth and love based on a strong set of virtues. Each foot of the height of the statue represents the 133 chapters of the text. Commissioned by former Tamil Nadu Chief Minister Mr Karunanidhi, the statue, created by sculptor V. Ganapati, was unveiled in 2000 and is believed to have cost over Rs 6 crore at the time. It has since become a major tourist attraction.

Although not on the same scale, Bengal boasts of several statues of poet and writer Rabindranath Tagore in Kolkata as well as Santiniketan, where the Nobel laureate lived and taught much of his life. The tallest statue of the poet, however, is in Jamshedpur. The over 11-foot-tall bronze sculpture captures one of the most popular poses Tagore has been spotted in – standing with his arms crossed behind his back and gazing out into open space with a seemingly omniscient gaze. The statue bears the quintessence of the poet’chapkan‘ (long coat) which combined elements of Hindu and Muslim clothing styles of the time. Costing nearly Rs 13 lakh, it was executed by sculptor Niranjan Pradhan and was erected by the Tagore Society, a cultural group in the city.

Hashmi believes that the disregard for culture and those who practice it is not necessarily a nationwide phenomenon, but rather “North Indian malevolence”. “If you were to go to Chennai, Hyderabad, Trivandrum or Cochin, statues of their greatest writers and poets can be found in their main streets,” he says.

His claim is vindicated in the statue of Subramania Bharati at the heart of a park in Pondicherry, also named after the Tamil writer. Considered one of the pioneers of modern Tamil literature, Bharati’s writing style was progressive. Many of his songs have also made their way into Tamil cinema. It was in Pondicherry, then under French rule, that “Mahakavi” Bharati escaped while fleeing the British, after the media house he wrote for was accused of sedition.

On Marina Beach in Chennai stands a statue of Avaiyyar, who according to Abidhana Chintamani (an encyclopedia of Tamil literature) is representative of three poetesses who lived in different eras of Tamil literature. The statue is seen holding a cane in one hand and palm leaves with her writings in the other. It was erected in 1968 next to the statue of another female poet, Bharathidasan, and four other statues. Bharathidasan, a Tamil poet, was named after Subramania Bharati and was a disciple of the Mahakavi. Both Avaiyyar and Bharathidasan challenged traditional gender norms that held women back from reading and writing, and emerged as great female writers of their time.

However, North India, says Hashmi, largely celebrates “no one but politicians”.

There are, however, a few exceptions. Varanasi, which was the birthplace of the Hindi writer Premchand and the 16th century Sufi saint Kabir, is also home to their sculptures. A half bust of the Hindi writer is kept at the Munshi Premchand memorial in Lamhi. Several bronze sculptures of the Sufi saint engaged in simple daily tasks find their place in Kabir Math, the resting place of the saint.

In Delhi, there is a statue of Mirza Ghalib in the compound of Jamia Milia Islamia University. The statue of Russian poet Alexander Pushkin at Mandi House sits unattended and often unnoticed, but nonetheless a landmark of the city. Said to have been “a gift from the Russians”, the statue was unveiled during the visit of Russian President Mikhail Gorbachev in 1988.

The dearth of statues dedicated to cultural icons can also be attributed to a flawed policy approach to the country’s education system, Hashmi believes. “Education stems from the type of politics of the people who run this country, and they don’t care about culture,” he says. Since the responsibility for imparting education rests with the government, it is imperative that those in power have a “culturally sensitive mindset”. “The government that decides to erect a statue of Sardar Patel, can also decide to erect statues and memorials of great creative figures,” explains the historian.

One could argue that an artist lives through their works, but the almost immediate impact on public memory through visual in the form of statues and murals is hard to ignore. The erection of statues, apart from the protracted government procedures involved, is obviously expensive.

Thus, several artists in the country have taken the responsibility of filling the gaps with street art. They create public memorabilia of the country’s cultural icons on city walls. Like the Delhi Street Art Initiative which has painted walls, including school facades, in various cities including Delhi, Allahabad and Lucknow, with portraits of famous personalities from the artistic world. On Pusa Road near Karol Bagh, they recently took over a few walls which now bear colorful images of cultural icons like Harivansh Rai Bachchan, Amrita Sher-Gill, Jamini Roy, Jagjit Singh, RD Burman, Kishore Kumar, Uday Shankar and Raja Ravi Varma. . The portraits evoke an obvious curiosity for these personalities. Even if one is familiar with the names, they tend to slow their pace in interacting with the artwork, and a new name is bound to lead to a quick Google search. This encourages passers-by to learn more about these personalities, says Yogesh Saini of Delhi Street Art.

A mural by Dadasaheb Phalke appeared on a wall in Mumbai in 2014, as part of another public art project by St + Art India led by Hanif Kureshi. Painted on the exterior of an MTNL building in Bandra by artist Ranjit Dahiya, the artwork had become an integral part of the cityscape until it was painted a few years ago following natural decay. The larger-than-life painting showed the father of Indian cinema against a bright yellow background, gazing intently at a reel of film.

Kureshi believes that having public iconography of cultural icons, whether in the form of statues or murals, helps start a conversation about the people who have contributed immensely to the country’s heritage, but who are often rendered faceless and ultimately forgotten in public memory. “A lot of people in and around the industry didn’t know about Phalke’s struggles. But when we put the mural up, at least people started to understand who this man was,” he says.

In a similar upcoming project, St+art India will paint a mural by Oscar-winning filmmaker Satyajit Ray later this month near Tollygunge metro station in Kolkata. It will be painted by Chennai-based artist, A-Kill.