The oldest school in Delhi is older than Delhi 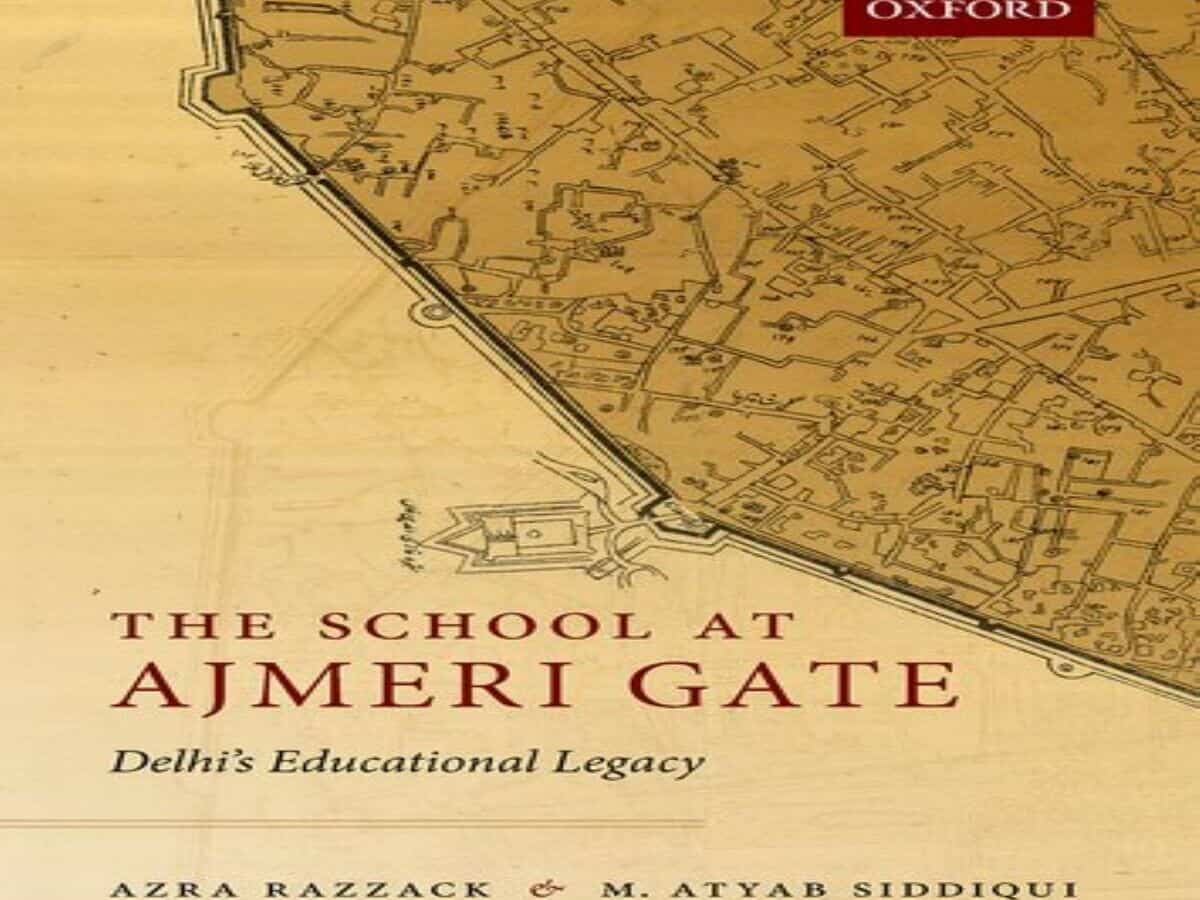 Behind every book, there is a writer or writers. Are the books written for the personal gratification of the authors? Is the purpose utilitarian, educational, or to win public ovations? There are writers who publish books because they are inspired by a purely disinterested and impartial search for knowledge and to clarify the questions that agitate them. Some books are simply a compilation of the proceedings of conferences held by academics. The book under discussion is a masterstroke of the life and times not just of an institution in Ajmeri Gate, Delhi – Anglo Arabic School – but of the complex relationship between the school and the cajoled Muslim community.

Just when you are at Ajmeri Gate, supposedly the border between Old and New Delhi, mere meters from the cacophony and chaos outside New Delhi Railway Station, lies an island of serenity. – a school much older than New Delhi, with a wholesale machine tool market to the west, a road leading to Rajiv Chowk (Connaught Place) to the east, and a colorful confusion of rickshaws, three- wheels, scooters, cars vying for space in the narrow alleys, peddlers on the sidewalks, lazy cows, people jostle along the sidewalks and of course the chaiwallah (tea seller) sitting in his khokha (kiosk), just in front of the huge gate.

Anglo Arabic School, one of the oldest continuously operating institutions in the world, which continues to be a chronicler of the history of the city and the Muslim community to this day!

The glorious school, as a living character in one of the stage performances of Ghalib’s plays by the famous actor and director, Saeed Alam, seems to remind all visitors who enter its gate of Hussain from 1692, about the checkered historicity beginning with Madrasa Ghaziuddin Khan, Anglo Arabic College, Anglo Arabic School, Delhi College and finally, Zakir Hussain College.

No institution in any nook or corner of the world has gone through an umpteenth number of vicissitudes, like this one, as aptly provoked in a well-researched book, “The School at Ajmeri Gate: Delhi’s Educational Legacy”, published by the University of Oxford Press and written by Dr M Atyab Siddiqui, Independent Researcher and Advocate and Professor Azra Razzack of Jamia Millia Islamia. The book has been blessed with quotes on the back cover by eminent authors like Barbara Metcalf, Gail Minault and Professor Krishan Kumar who states that what is most fascinating about the book are the stories buried in the rubble of the he story by Azra and Atyab, is absolutely engaging from the start to the last word focusing on the complex relationship between the school and the cajoled and beleaguered Muslim community. The book also focuses on how glorious institutions like this have been relegated from a lofty pedestal of unsurpassable glory to a pathetic existence due to neglect on the part of the community they serve. Today, the Anglo-Arabic is no longer even a semblance of its glorified existence prima o peer (queen of all institutions) for three centuries. Pathetically enough, he appears to be on oxygen! Gone are the days when its cricket and football teams lifted numerous trophies and students from illustrious families studied here.

In the words of renowned University of Texas author Professor Gail Minault, this living book traces the history of a venerable educational institution, through its triumphs and vicissitudes, detailing its valuable contributions to culture. , the architecture, the language, the press, the politics, the sport and the spirit of the inhabitants of the walled city of Delhi and its inhabitants.

Truly, life in the walled city of Delhi encompasses fun, frolics and smart street food, fiery poster wars, often indulging in character assassination, mushairas (poetic gatherings), the oldest crafts, such as qalaigiri (coating copper vessels with a silver color on a kiln), rangrezi (coloring clothes), bhishti (offering water from a leather bag into a katora which is a silver vessel ), karchob (very meticulous and fine workmanship on expensive garments with glittering yarn and threads) etc which are a rare sight and can be found only in Old Delhi. Old Delhi had thrilling sports activities like patangbai (kites), kabooterbazi, (flying pigeons) baterbazi, (goose fight) pateybazi (bamboo fight) etc.

Despite many books in the past, perhaps, this book, to date, seems to be the best document painstakingly detailing its various historical ups and downs. During the mutiny of 1758, part of the school was destroyed. Until 1827, this madrasa was a religious seminary but after the interference of the East India Company, it was Sir Charles Metcalfe who also started teaching English, mathematics and natural sciences.

The historic marble tablet on the school’s chemistry lab says, “”Etemad-ud-Daula, Zia-ul-Mulk, Syed Fazal Ali Khan Bahadur Sahab Firoz Jung donated Rs 1.70 lakh for the propagation of this institution and gave it into the Bahadur Company Trust in 1829. Also to this day it has some of the best old books of science especially medicine in its library with Neil Harvey’s book on Blood Circulation and anatomy with hand drawn diagrams. The most important literary activity in the school’s history was the formation of the Vernacular Translation Society in 1832. As Urdu was the language of instruction, students could not take advantage of the variety found in English, German, French, algebra, social and natural sciences etc…

In 1840, the institution was transferred to Darah Shikoh (Shahjahan’s son) Library. Incidentally, in 1840 only, Ghalib went here to find a job as a teacher of Persian but declined the offer as Thomason, then headmaster of the college, did not come to receive at the door due to his protocol and therefore , the clash of egos resulted in Ghalib’s name being jarringly associated with it.

During the Sepoy mutiny of 1857, it remained closed for 7 years and did not reopen until 1867. At that time, the English named it “Anglo Arabic College”. It was again attacked during the partition in 1947, and with the support of Dr. Zakir Hussain and other Delhi intellectuals, like Mirza Mehmood Baig, Mir Mushtaq Ahmed and Maulana Imdad Sabri among others, came to life again.

In 1975, it was renamed Zakir Husain Delhi College as the family of the late President, Dr. Zakir Hussain wanted some kind of memorial and hence requested Mrs. Indira Gandhi. A better option could have been to leave Delhi College as it was and a new institution could have been established in the name of Zakir Hussain which could have further benefited the community. However, whims and political whims have always harmed the cause of the community through such tasteless mismanagement.

Once released and on the shelves, it could sell like hot cakes as it also encompasses the inveterate culture of the walled city of Shahjahanabadi of Old Delhi’ites, including the football club rivalries between Mohun Bagan, Mohammedan Sportaing, East Bengal, BSF Jullundur, RAC Bikaner, Tata Sports Club and Punjab Police among others. like the book
considers Anglo-Arab as the hotbed of football, players like Manzoor Ahmad Khan, Shuja’at Ashraf, Surinder Kumar, Sardar Khan who later joined bigger clubs including the Kolkata Big Three and clubs like Aryans, Titanium Kerala, Simla Youngs, etc. in the book there are very catchy details about football as Atyab till date has been a die-hard follower of the game remembering in his book how the company stadium (renamed Ambedkar stadium), how unofficially , there were sections set aside for the boisterous Anglo-Arab boys, who cheered tumultuously on teams like Mohammedan Sporting and Andhra Pradesh Police and Taj Club, Iran. Even in Anglo Arabic, Atyab and Azra organized a football tournament in the final of which, Tikri Border Government School won the trophy by beating Modern School, Barakhamba Road, New Delhi.

The truth is that in telling the story of the school at Ajmeri Gate, a number of stories are unpacked interspersed with interesting details and anecdotes as the narrative beautifully explains the intricacies surrounding an educational institution and its commitment with the local community and humanity, globally.