The iconic trans woman who brought joy to Kashmir 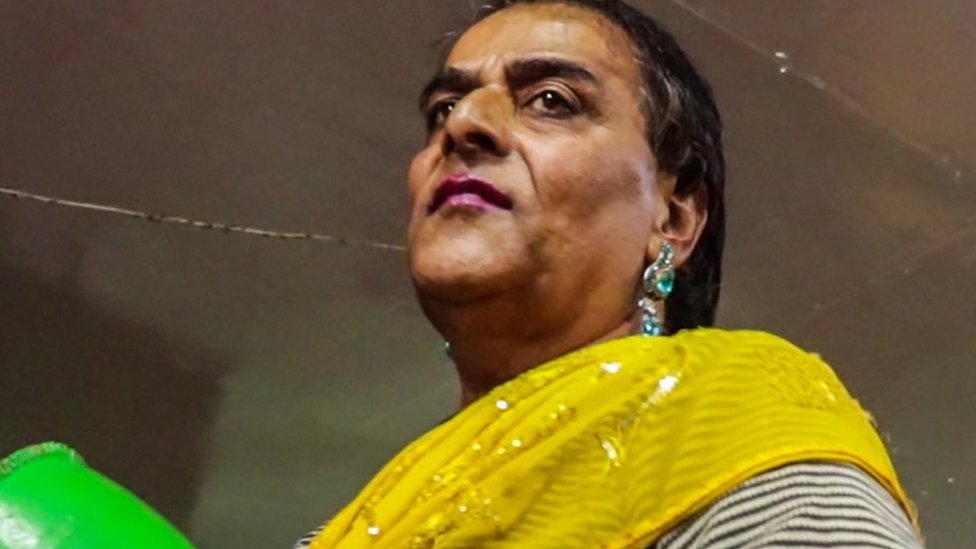 Last week, Reshma, an iconic trans woman and singer from Indian-administered Kashmir, died after a long battle with cancer. She was 70 years old.

His death plunged the region into mourning – and thousands attended his funeral in the main town of Srinagar where the revered artist lived.

A wedding singer by profession, Reshma has injected joy, humor and vitality into the lives of thousands of Kashmiris who live in the shadow of violence and conflict.

Both India and Pakistan claim Kashmir in its entirety, but only control parts of it. An armed revolt has been waged in the Indian-administered region for more than three decades, resulting in thousands of deaths.

“In Kashmir, happiness is rare. Almost everyone is stressed in one way or another,” says Sapna, a transgender woman from Srinagar. “But Reshma could lift anyone’s spirits with his performance.”

His life was also an inspiration to the marginalized community of eunuchs (or hijra) in the region.

Hijras – which include transgender and intersex people – enjoy a unique position in Kashmiri society by presiding over weddings, earning them the nickname “Manzimyoer” or matchmakers.

But they also face discrimination, with many being abandoned by their families and subjected to physical and emotional abuse.

The decades-old conflict has overshadowed their plight, and recent advances in trans rights have done little to improve their conditions, says LGBTQ activist and writer Aijaz Bund.

“A lot of them become matchmakers or singers because society considers them born for it.”

For Reshma, however, music has always been her calling.

Born in central Srinagar in the 1950s, Reshma’s childhood was a tightrope walk between constriction and compromise.

At school, she turned heads by speaking and dressing feminine and was constantly bullied for it.

Things weren’t much better at home where her family – including two sisters and six brothers – tried to “discipline” her into giving up her ways.

These experiences shaped her worldview and she continued to talk about them later in her career.

“They [parents] beat me many times… If only they knew about my inner conflicts,” she told journalist Hirra Azmat in 2019.

Unable to resist the bullying, she dropped out of school after the fifth standard and took up sewing instead.

It was a lonely time in Reshma’s life where, she says, she often felt “smothered” in isolation.

“I saw children my age playing hopscotch and laughing. How could I join them? I knew they would find me strange and make fun of me.”

But music proved her savior and a moment of unbridled ambition came when Reshma, then 22, went to deliver clothes to a family and they asked her to sing a song.

Reshma stood up, cleared her throat and started humming, the song slowly building in her throat. And as she sang in front of the delighted audience, a young man impressed with her talent threw a chit at her with the word ‘Reshma’ or resembling silk written on it.

“That’s how I got my public name,” she said.

Overjoyed, Reshma ran home to tell her mother what had happened.

But her mother, thinking that the family had ridiculed her child, burst into tears and forbade Reshma to sing again.

Thus, Reshma continued to hold back, both her songs and her dreams.

A star is born

In 2001, when her younger brother died in a road accident, she decided to take care of her four children.

Her decision was met with resistance from society: “How can a transgender person [person] Start a family? This question was continually asked of me,” she said in the 2019 interview.

There were also other, more pressing challenges – like the realization that a tailor’s income was not enough to raise four children.

It was then that Reshma decided to start singing at weddings.

She quickly became a familiar figure at parties, with her brightly colored scarves, ballerina anklets tied around her wrists and a smile that lit up her kohl-lined eyes.

Her lively tunes and seductive poetry – which she imbued with folklore and bawdy commentary – about the fickleness of relationships were in high demand.

The most popular of these was ‘Hai Hai Wesyee’, a song which elevated Reshma to celebrity status in Kashmir.

A video of the performance shows her singing with quavering verve of a lover’s contrasting moods, sometimes like someone who torments him with longing and sometimes fills his heart with joy.

In each stanza, she presents the lover’s idiosyncrasies to their confidante in the form of a lament, the words “Hai Hai” acting as a whimsical lament.

The clip went viral in 2018 and has since been viewed tens of thousands of times on social media.

Reshma’s androgynous voice and quirky style were especially popular with women – for many of them, weddings are the only source of entertainment and a time when people forget their tense realities for a while and revel in the celebrations.

A woman who wanted to remain anonymous remembers fondly when Reshma performed at her daughter’s wedding in 2018.

She had a knack with words where she often mimicked English phrases in a comedic way to add more drama to her performances, she said.

“The way it made everyone laugh! She was the queen of social gatherings.”

Over the years, Reshma has become a beacon of hope for the transgender population of Kashmir who continue to face violence at home and bullying at school.

“Even though our performances cheer people up, we are not recognized as Allah’s creation,” Sapna says.

But Reshma, with her songs and videos, brought recognition to the talent of trans people, she says, adding that the community “lost its voice” with her death.

“She never stopped talking about the marginalization we have faced since we were born.”

In his own life, however, Reshma continued to face discrimination and stigma, Bund says.

In older interviews, she recounted how she was spat on, manhandled by strangers and even forced by security personnel stationed in Kashmir to sing and dance, which made her feel humiliated.

“I always wanted to look like a woman. But I would have been killed if I had done it openly,” she said last year.

She was also misinterpreted throughout her career, being publicly referred to as a man.

“Even after her death, she is considered by people as an artist but is not recognized as a transgender person,” says Mr Bund.

But an unfettered Reshma continued to sing and laugh as long as she could.

For her, singing was a life-affirming act – it was what Sapna calls, a “God-gifted talent”.

“Her songs and her style had the ability to make people laugh,” she says, before quickly adding, “even if they didn’t fully understand her.”