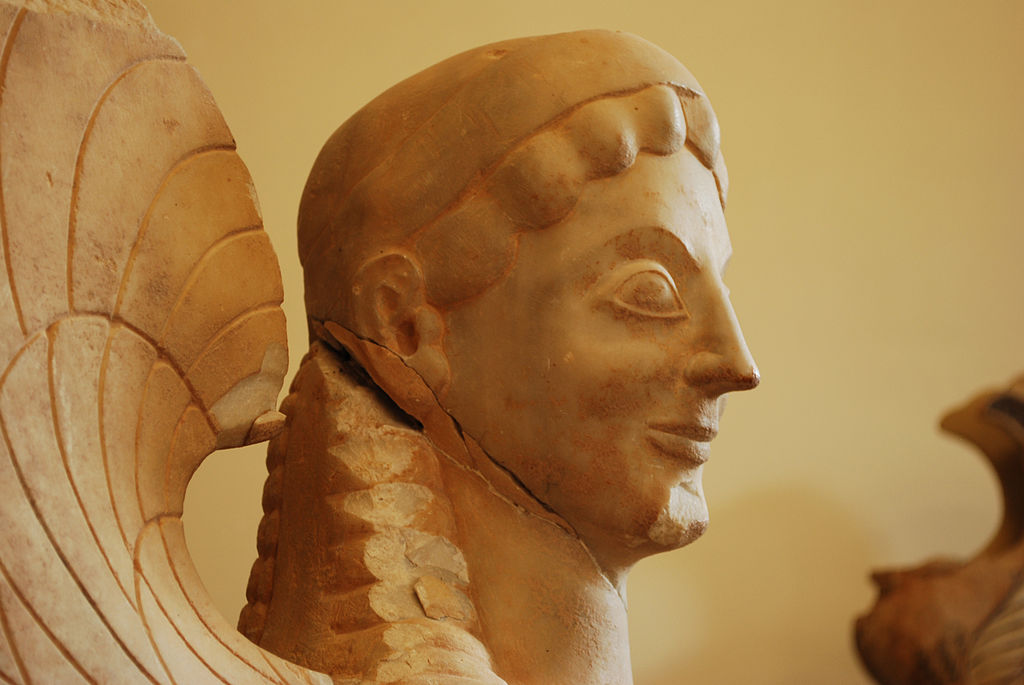 One of the most recognizable figures of antiquity, the Sphinx took many forms as depicted in the civilizations of Greece, the Near East and Asia. With features such as a male or female human head, the body of a lion, and the wings of a giant bird, the Sphinx is a symbol of great power.

In ancient Egypt, of course, the iconic 66-foot-tall statue guarding the Great Pyramid of Giza has masculine features and was designed to be a symbol of great physical power.

However, across the Mediterranean, the Greek playwright Sophocles, in his tragic play Oedipus Rex, described the Sphinx as a female “monster” with a cat’s body, bird’s wings, snake’s tail – and disturbing wisdom. The riddles she posed baffled and infuriated mortals – and posed a threat to their very existence.

This unforgettable figure is depicted as a being who lived outside the city of Thebes.
She was the daughter of the god Orthus, and either of the goddess Echidna or of the Chimera, and posed a riddle to all travelers, in order to let them pass.

After posing almost impossibly difficult riddles to mortals before letting them pass, she eats anyone who can’t correctly answer her most burning question: “What happens on four legs in the morning, two feet at noon and three in the evening?”

Of course, we know, having learned from the example of Oedipus, that it is “a man”, who crawls as a child, then walks as an adult and uses a walking stick. as an elder.

The correct answer is “Day and night”; these two words are both feminine in the Greek language, note the researchers at greekmythology.com. After Oedipus correctly answered this question and the first question, the Sphinx promptly committed suicide.

When Oedipus is thus allowed to pass through the city, he is eventually made king there, marrying a woman who turns out to be his mother, Iacosta – but, as the author of “Mythology and Fiction Explained” puts it, “but that’s a story for another time.

Were men so threatened by female power that they were turned into monsters?

According to Sophocles, the Sphinx is so beside herself after Oedipus guesses correctly, that she feels she has no alternative but to throw herself off a cliff.

The Sphinx who posed these difficult riddles was just one of many Greek mythological monsters depicted as female, including Scylla and Charybdis, Medusa and Lamia.

But how is this possible? Were women such a threat to men, were their verbal and emotional powers threatening enough that Sophocles and the reciters of Greek mythological tales gave these fearsome monsters female form?

In a recent story of Smithsonian magazine, author Nora McGreevy recalls remarks made by the classic Debbie Felton in a 2013 essay, which states that such tales, passed down from generation to generation, “were about men’s fear of the destructive potential of women.” The myths then realize, to a certain extent, a male fantasy of conquest and control of women.

Journalist and critic Jess Zimmerman, writing in a collection of essays titled “Women and Other Monsters: Building a New Mythology”, states, “Women have been monsters, and monsters have been women, for centuries of stories, because stories are a way to encode these expectations and convey them.

Zimmerman theorizes what is expected in cultures that punished women for their native intelligence and for “keeping knowledge to themselves.”

Sphinx is an embodiment of the maxim “knowledge is power”

As she says – and as any educated person knows – knowledge is indeed power. This is one of the reasons, she says, why for so long in human history, men have excluded women from formal education.

“The story of the Sphinx is the story of a woman with questions that men cannot answer,” Zimmerman says. “Men took it no better in the fifth century BC than they do today.”

Interestingly, a contemporary poetess, the late American writer Muriel Rukeyser, who lived from December 15, 1913 to February 12, 1980, reinvented the meaning of these female creatures – which had, after all, been created by men.

In his interpretation, the Sphinx’s confrontation with Oedipus unfolds very differently.

“Long later, Oedipus, old and blind, traveled the
roads. He smelled a familiar scent. It was
the Sphinx. Oedipus said, “I want to ask a question.
Why didn’t I recognize my mother?

“You gave the wrong answer,” said the Sphinx.

“But that was it
made everything possible”, said Oedipus.

“No,” she said.
“When I asked, What walks on four legs in the morning,
two at noon, and three in the evening, you answered,
Man. You didn’t say anything about the woman.

“When you say Man, says Oedipus, you include women
too. Everybody knows that.”

She said, “That’s what
you think.”

A changing of the guard of Greek deities

Some scholars believe that the death of the Sphinx represents how the ancient Greeks transitioned from their most ancient traditional religious practices, represented by the Sphinx, to new ones, including the establishment of the Olympian deities, represented by Oedipus.

It is said that the Sphinx had to be killed to impose the new deities.

But it’s hard to see the repeated deaths of female deities – and even monsters – of ancient Greece, and not believe that something else was going on there.