The Forgotten Stupa | Free from all ties 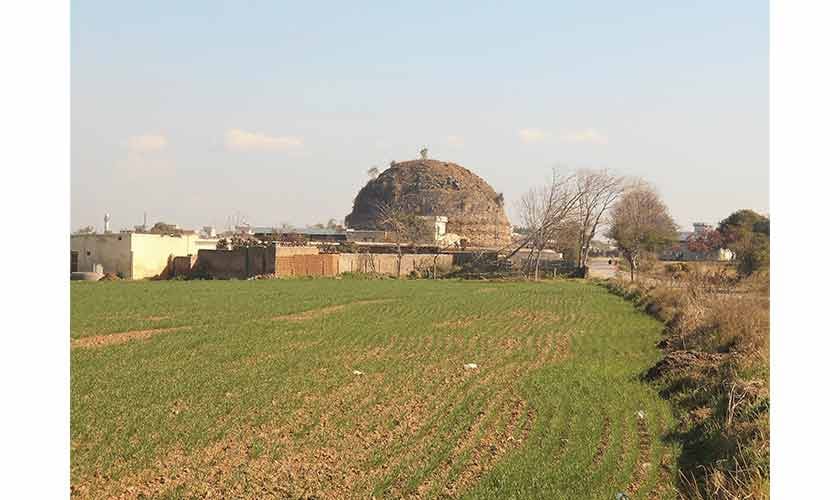 some recent events in pakistan are helpful in understanding the fundamental antipathy and political rhetoric behind the usual depiction of the Gandhara civilization, especially at a time when there has been a focus on promoting religious tourism in the country and the presentation of a peaceful image to the world.

In Mardan, a life-size statue of Buddha – around 1,700 years old – was smashed into pieces with a hammer; in Chilas, several ancient Buddhist rock carvings have been damaged by paint; and more recently in Taxila, a group of teachers staged a protest against the headmaster of their school for allegedly holding a weekly conference on the civilization of Gandhara. The protesting teachers called him un-Islamic. Last year, when the world marked 20 years since the destruction of the Bamiyan Buddha statue, the event was missing from local discourse.

Built heritage belongs to a region and not to any of the religions practiced in that region. Signs of the Buddhist civilization that once flourished in Pakistan can be seen in the form of stupas, monasteries and other religious structures throughout the country. These are an important part of the country’s heritage.

Stupas are central to Buddhist heritage in general. Many of its last remains are in Pakistan. Due to their particular conical shape, the stupas are called Toup and Toopi in the Pothwari language. Only one stupa is today intact in Rawalpindi. It is called the Mankiala stupa. Another was razed during the town’s development as a garrison by the British Army. Adjacent to the town of Sagri along the Grand Trunk Road, the village of Mankiala – where this stupa stands – was once a town and an important trading center.

According to local oral traditions, the stupa of Mankiala is the resting place of the horse of Iskandar or Alexander of Macedonia. There isn’t much documented history about the town, but there is a book, History of Rawalpindi by a self-published indigenous author, master Muhammad Arif Minhas, who relies primarily on oral histories. He writes: “Mankiala was founded by a Bhatti Rajput named Raja Maanak Rai. The old city was located northeast of the stupa. There were once many Vih ras (Buddhist monasteries) in Mankiala. It is reported that Ashoka’s eldest son fell ill and died in Mankiala. This suggests that the city existed around the 3rd century BCE. Raja Rasalu, a Bhatti Rajput, who lived before the time of King Kanishka, is said to have waged war against demons and killed some of them in Mankiala… King Kanishka’s courtier and poet writes that the research papers presented to the fourth Buddhist congress were compiled by Mankiala scholars at Mankiala. From the Kanishka period until the Mughal era, Mankiala was inhabited by a Gujjar tribe. Many people believe that Mankiala was founded by the Gujjars. According to the research of Raja Sodaagar Khan Bhatti son of Raja Lal Khan, Prince Nall of Sialkot came to Mankiala and after conquering it he ruled over it. He had two sons, Salwaan and Siri Chandar. Salwaan had two sons Raja Rasalu and Pooran Bhagat. In the seventh generation of Siri Chander, Raja Maanak migrated and made Mankiala his home. The etymology of Mankiala is associated with it.

Stupas are central to Buddhist heritage in general. Many of its last remains are in Pakistan. Due to their distinctive conical shape, the stupas are called Toop and Toopi in the Pothwari language..

At the center of Buddhist heritage, history and iconography, Gandhara is the ancient name of a region of present-day Pakistan and Afghanistan. The first archaeological excavations in the northwestern part of India were carried out in 1830 at Mankiala. A Buddhist stupa was discovered by a British diplomat in 1808, while on his way to meet Shah Shuja in Peshawar. Mankiala, once a major Buddhist site located on the GT Road in present-day Pakistan, was first excavated by Jean-Baptiste Ventura, a French general in Maharaja Ranjit Singh’s army. Ventura spent his time and finances exploring the hidden treasures of the stupa site. After his excavations, Ventura sent a short letter to Maharaja Ranjit Singh in Persian saying that Alexander’s Horse Tomb had been discovered. Ventura also discovered the first copper coin with the Buddha image on it at Mankiala stupa.

In the late 1970s, British historian and radio presenter John Keay visited Mankiala. In his book, India discovered he writes of the significance of the Mankiala Stupa: “A British mission twenty years (before GenVentura) earlier had thought it might be Greek. It was worth studying. Like Maddock, Ventura first attempted to dig a hole in the side and only succeeded in collapsing large amounts of rubble. But, with time and unlimited work, he took a different approach and started digging from the top of the dome. Only three feet down he found his first coins. Others followed at intervals, then came from small compartments containing cylindrical boxes and canisters of gold and copper in which were scraps of cloth, jewelry, and other coins.

The coins, many of which were gold, had important implications for the reconstruction of Indian history. Ventura’s initiative was a considerable success and brought him, in addition to some salable treasures, a reputation as an archaeologist. Other European officers in the service of Ranjit Singh joined the fray and, in Punjab and neighboring Afghanistan, there followed a period of intense stupa raids. There was little conclusive evidence, but it was beginning to give the impression that the stupas and their relics were Buddhist. Moreover, the success of these new archaeological ventures provided a powerful boost to would-be archaeologists across the border from British India.

In recent years, a boundary wall has been erected around the stupa. The enclosure is largely locked and a room that manages a micro-mill adjacent to the site keeps the key to the main door. If the keeper of the keys cannot be found, one can forget to see the stupa. Neighborhood kids visit it often, going all the way to the top. Many visit the place in search of clues to the Buddha’s wisdom. Monks from all over the East once came to stay and pray in Mankiala.

The writer tweets at @Ammad_Alee