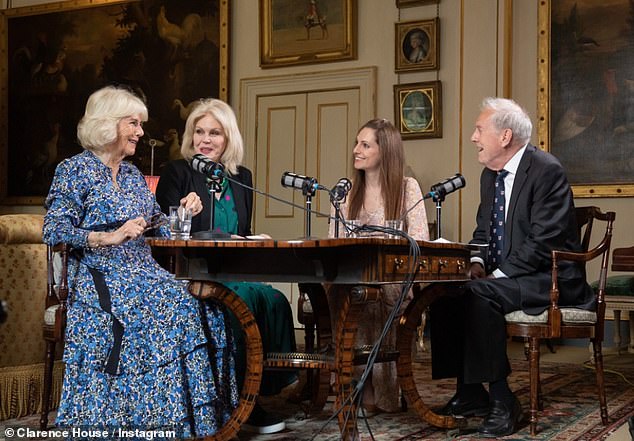 The Duchess of Cornwall appeared in high spirits as she posed alongside Dame Joanna Lumley and Gyles Brandreth in photographs released today to mark the launch of the Commonwealth Poetry Podcast.

Camilla, 74, greeted the TV personalities at Clarence House, with the group captured in the Garden Room of her London home while taping the first episode.

Two photos of the Duchess, who said in the podcast that she believes memorizing poetry can have lifelong benefits for children, with celebrities have been posted on the official Clarence House website . Twitter account and on Instagram today.

The Commonwealth Poetry Podcast, hosted by award-winning podcaster Gyles Brandreth and his daughter Aphra, will air fortnightly in 54 half-hour episodes over the next two years, starting on Sunday.

With different guests in each episode, the podcast will explore the poetry, heritage and people of each of the 54 Commonwealth countries. Gyles said having Camilla in the first episode was “an absolute treat”.

Clarence House has shared behind-the-scenes photos taken at Clarence House to promote the Duchess of Cornwall’s appearance in a new podcast. It showed Camilla, 74, with Gyles Brandreth, who hosts the Commonwealth Poetry Podcast with her daughter Aphra and Dame Joanna Lumley

A snap shared online today showed the Duchess sat around a table with Gyles and her daughter Aphra, who will co-present the podcast episode, and Dame Joanna as they recorded the programme.

Dressed in a blue floral dress, Camilla posed alongside her guests in a line-up in another behind-the-scenes snap.

On the show’s first episode, Camilla talked about The Reading Room, which connects readers to books they’re sure to love.

She also talked about her travels across the Commonwealth, as well as her favorite British poets.

She also claimed that the task of memorizing poetry can help children focus. “If you have to memorize something, watch it properly and don’t just read it,” she said. 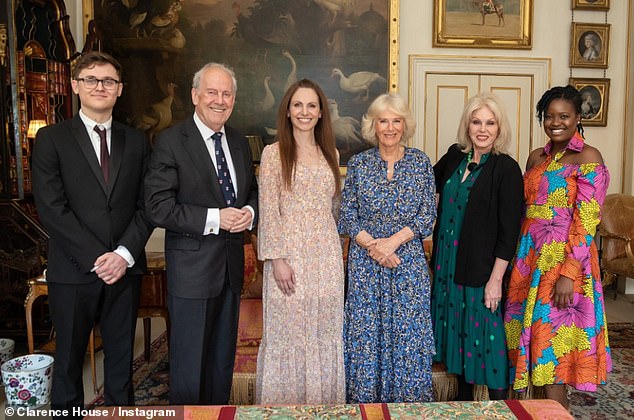 Wearing a blue floral dress, Camilla posed alongside her guests in a line-up in another behind-the-scenes snap

And I think it’s a nice thing to put away. You can have a little store where you have all these poems in you for the rest of your life, and at some point, much like today, you can pull them out and talk about them.

She described childhood memories of reading with her father, Major Bruce Shand.

Reciting lines from Rudyard Kipling’s A Smuggler’s Song, she says: ‘It was about a child waking up at midnight.

“I remember my father reciting it to us. He read the poem and we had to sing the chorus. And we all got The Owl And The Pussy-Cat. We all went to sea in our beautiful pea green boats.

Camilla, who names Christina Rossetti’s poem Echo as a favourite, reflects on the success of her Reading Room project, which she says was assumed by many to be “a total flop”.

She adds: ‘It’s a book club, something I brought up in lockdown. A lot of people wrote to me after I recommended a few books for them to read and it went so well and I got so many letters that I thought, why don’t we start scaling it up ?

“There were a few people who were convinced it wasn’t going anywhere and it would be a total flop, but luckily I was able to prove them wrong.” 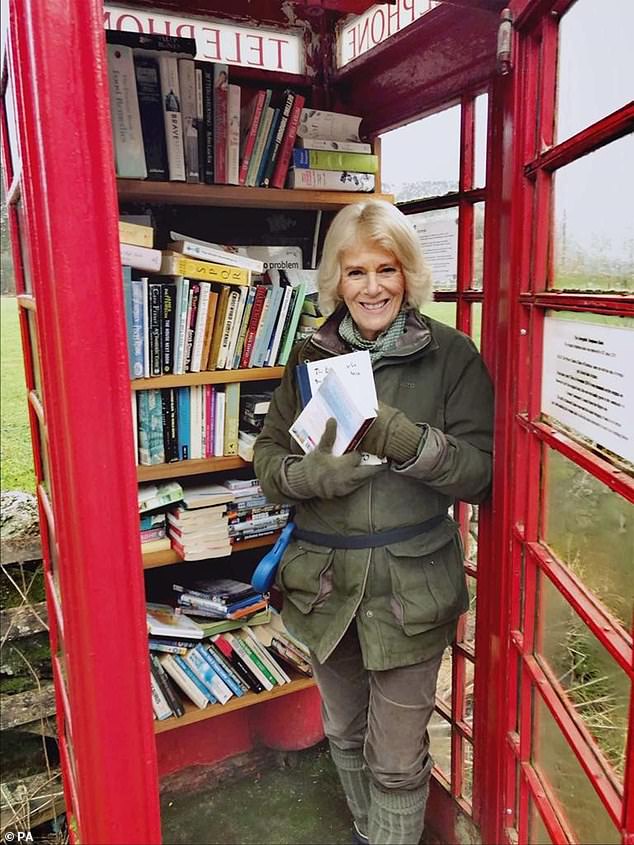 The podcast, part of a series featuring Commonwealth authors, was produced by students at the University of Chester, where the Duchess, as Countess of Chester, holds an honorary degree.

Gyles said, “Oddly enough, even though I’m a seasoned podcaster and broadcaster, I was still a bit nervous.” But honestly, it couldn’t have been simpler.

She is wonderfully relaxed. For us, recording the podcast was fascinating because you don’t often hear someone like her speak at length.

“But she was natural and even though we cut it down to about 40 minutes, we got about an hour of chatter.”

Camilla, Dame Joanna and Gyles and Aphra also read poems together, encouraging people to come together for informal poetry slams over tea and coffee with friends and neighbours.

The podcast release comes just before the Prince of Wales and Camilla are due to attend the Commonwealth Heads of Government Meeting, which is taking place in Kigali, Rwanda during the week of June 20.

Charles has been an active supporter of the Commonwealth for over 50 years and together with Camilla they have shown their support through official visits, military links, charitable activities and other special events – such as the opening of Commonwealth Games in 2010 in New Delhi, India; in 2014 in Glasgow and in 2018 on the Gold Coast, Australia.

Gyles, who is an ambassador for the Royal Commonwealth Society, added: “At the end of the day, we all had fun. We had fun talking about the Commonwealth, about poetry – sometimes being serious – but also laughing. was a joy.

“In our next episode, we visit Rwanda, a beautiful country with a troubled past, and meet a Rwandan poet who confronts both his beauty and his pain. Then it’s St Kitts and Nevis, Cameroon, the Solomon Islands, Australia, Cyprus.

“In 54 episodes, we travel across the Commonwealth – home to two and a half billion people – using poetry as our guide. In some episodes there is also singing and dancing.

The Commonwealth Poetry Podcast is available from today on commonwealthpoetrypodcast.co.uk and on iTunes, Spotify and Amazon Music.