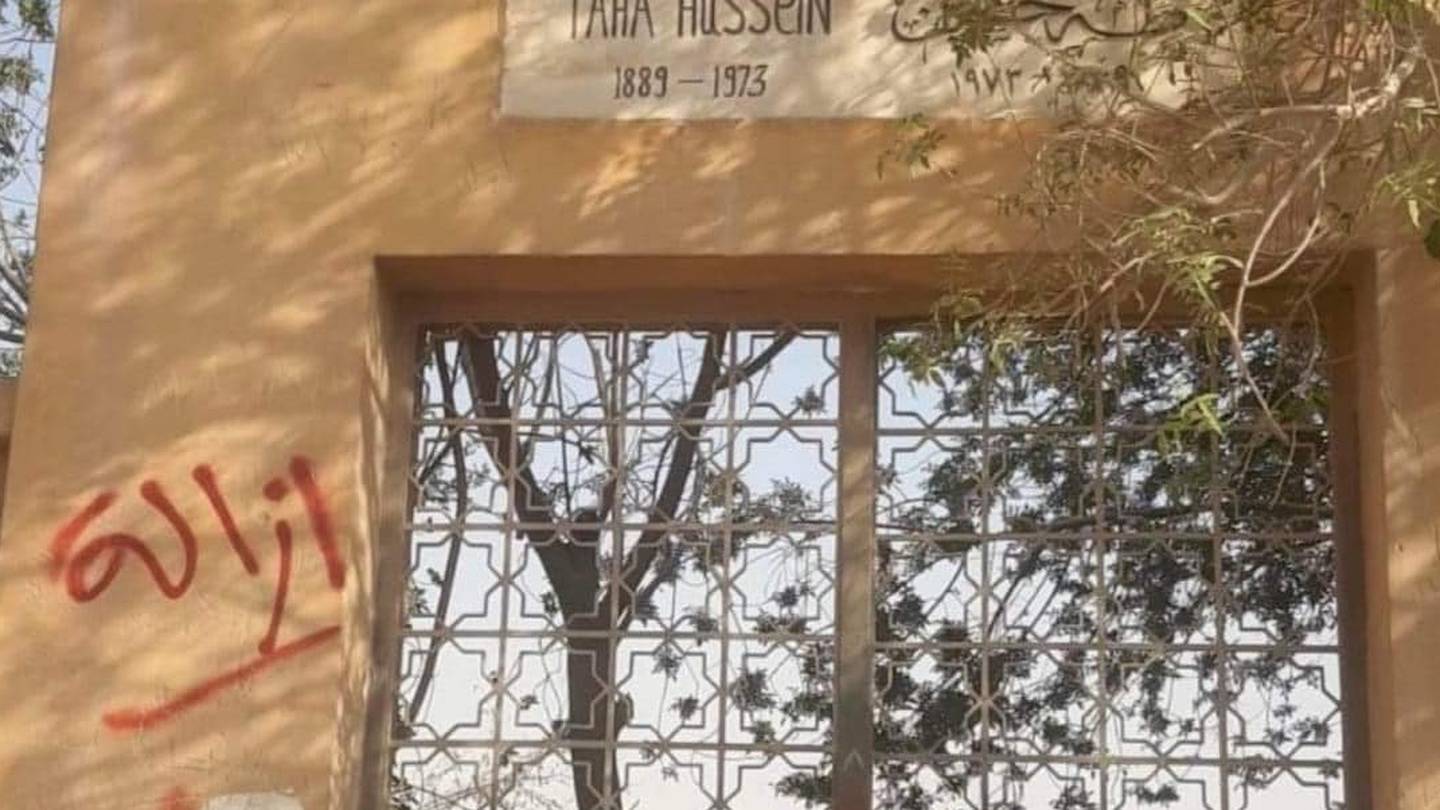 The tomb of famous Egyptian writer Taha Hussein looks likely to be demolished to make way for a viaduct in the Old Cairo district of the Egyptian capital.

Speculation that the tomb had been earmarked for demolition began in May when visitors noticed a spray-painted red cross at the entrance, similar to thousands of others in Cairo’s historic city of the dead – a medieval necropolis in Islamic Cairo – which are being removed for the construction of a corridor linking an intricate network of new bridges.

Although there was no official confirmation, sources from the government authority in Cairo told the Egyptian daily Al Masry Al Youm Wednesday that Hussein’s grave would be removed this month, along with several others in Old Cairo’s Al Khalifa district.

This week, the word “demolition” was added above the red cross. Photos of the brands circulating on social media have sparked outrage among fans of Hussein’s works, which are part of school curricula across the Middle East.

Some of his descendants are buried in the tomb with Hussein, several of whom were influential in their own right. Among them are her daughter Amina Taha Hussein, one of the first Egyptian women to receive a university degree, and her husband, Mohamed Hassan Al Zayat, a diplomat who played a central role in Egypt’s negotiations with Israel and the United States that led to the signing of the Camp David accords and the Egyptian-Israeli peace treaty in 1979.

Egyptian author and researcher Galila Al Kadi on Wednesday condemned the demolition plan in a Facebook post in which she said the tomb’s water supply had been cut off. Family tombs in Egypt are usually composed of several rooms and a garden maintained by a guardian.

“We will sacrifice the remains of our scholars and writers, those people who created Egypt’s renaissance and enlightened the region with their art and knowledge. We have returned to a primitive age where bridges and corridors are sacred,” said Al Kadi, who has written a history of the City of the Dead, much of which is a UNESCO World Heritage Site.

According to owners of graves that have already been demolished, families have the option of removing the remains of deceased members for reburial elsewhere, such as in new cemeteries outside Cairo that have been opened specifically for this purpose.

Hussein’s great-granddaughter, human rights activist Maha Aoun, phoned several talk shows in May after initial reports of the impending demolition of her grave.

She told Al Nahar, a private TV channel, that when she asked about the reported demolition order, the governor of Cairo issued a statement calling it a rumor and saying the tomb would remain intact.

However, when demolition machinery was brought to the site a few days later, she submitted an investigation to a planning authority. The authority confirmed that a development project was underway in the area, but said the tombs to be removed had not yet been decided, it said.