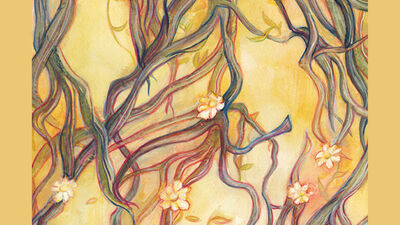 Each edition of Cinema Woman Magazine centered on a film directed by a woman, with interviews with filmmakers and film reviews written by women around the world. “After the first few issues, I started hearing tons of women on social media, thanking me for airing the interviews, grateful for the opportunity to learn from women filmmakers,” Martin says.

The positive response reflected a need for community and educational resources, inspiring Martin to launch Cinema Femme’s short film festival to further support emerging women and non-binary filmmakers. Now in its third year, the festival offers the Breaking Down Walls mentorship program as a grand prize awarded to participating filmmakers.

At the culmination of the four-day festival, a group of established filmmakers select their personal mentees from the festival showcase. “Allowing mentors to individually choose their mentee based on common thematic interests allows for a richer experience on both sides,” says Martin.

Mentoring is a six-month commitment that mentors and mentees navigate on their own terms, with the requirement that they meet for one hour each month to establish a working relationship. “All selected mentors have a passion for supporting emerging artists,” says Martin. “Mentors are chosen based on their demonstrated passion for uplifting female, non-binary, or underrepresented voices in the industry, either through their on-screen work or the way they work their sets,” explains- she.

Mentors help their mentee develop an ongoing project, develop skills and expand their network; In 2020, filmmaker Laura Moss mentored writer-director Gabriela Ortega as she worked on her short film “Huella,” which screened at the 2022 Sundance Film Festival and is now in development into a feature film.

This year’s Cinema Femme short film festival will feature 23 shorts covering a variety of topics, including the story of two stoner witches seeking revenge, a rogue AI virtual assistant and a father who must give up his daughter for a family. hospitality, to name a few. Each block of shorts will be followed by a live Q&A with a famous woman or non-binary filmmaker.