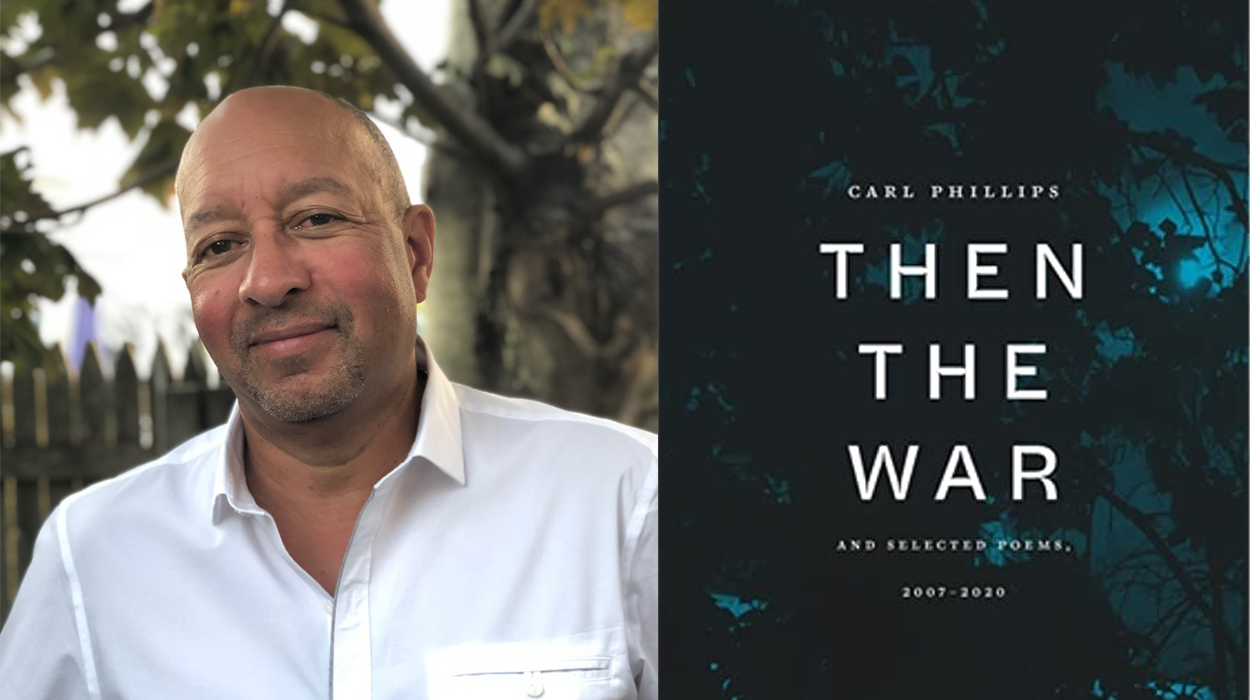 Carl Phillips writes poetry of fine distinctions. If he were a painter, he would take a color – green, let’s say – and show us all the shades and temperatures it can possibly withstand and always be called green, and we would know with our eyes that a focus tight, for a great artist, it’s barely that. What such a profession allows is a superimposition of vision. “The dragon fruits/cacti, adorning the courtyards we passed through, had not yet / bloomed, but soon would, as what isn’t love – at all – / may begin to look like of love.” Accuracy is supported (in this case) by the long line, a line that seems to praise taking the words necessary to get it right. And Phillips distinguishes, always, because he is a poet of intense and tender doubt, a poet of chains of clauses, a poet of linguistic age groups, a poet of juxtaposed sound images, of beautiful agitated equivocation, of hard and surprising enjambment, a poet whose art is among the best representations we have of the modern spirit in all its wonder and melancholy uncertainty. It’s exhilarating but I feel it in my body. A bewitching rhythm that keeps me awake like tantra: “Slowly the fog did what the fog does…”

Then the war, released this spring, is made up of eighty-two pages of new poetry and over a hundred additional pages of selected works spanning the past seventeen years, so it’s a cornucopia. Includes booklet, Star map with action figures, which will be unfamiliar to many readers. Go back up to speak low, a book that began: “The wind stirred – the water beneath him stirred accordingly… / The pattern of the wind was his, and that of the water too. The water in this direction was the reflection of the wind. It is like the wind and like the water, in its rustling alliterations and its repetitions. Then the war begins with a song that quickly finds its way to accolade, defining itself as “Not a crown no more a / crown little song carried timidly.” Corn Then the war also includes a prose song. A lyrical essay (sequence of paragraphs? there are fourteen of them, as if each paragraph were a line in a sonnet) entitled “Among the Trees”, which is advertised on the dust jacket copy as a kind of memoir, and which touches to everything from Tolkien to the weirdness of the woods to the irony of being left hanging by his underwear in a fig tree by his black father. History whispers its sinister, indifferent tones at the confines of all intimacy in Phillips’ poetry. And again, Phillips is at his best when he pushes abstraction towards precision by making it speak in finer shades – a style very powerful in its ability to represent emotional life, both intangible and so particular. “I used to speak”, he writes, “in terms of gray areas, by which I meant, I think, a space where what happens between two bodies and what happens almost looks like.” “I think” and “as if” are typical Phillips phrases – every statement is always softened – or refined – into suggestion by this type of language, every statement reduced to a possibility. Meditative, hesitant, restless – these are things writers say about Phillips’ much-honored work.

The poet, who moved with his air force father and stay-at-home mother – she was English and they met when his father was stationed in London – thought at one point, after teaching Latin in high school for a while, that he was going to get a doctorate. It didn’t work out, and neither did his marriage to a woman. His confrontation with his own sexuality emerged along with his poetry (or at least his life as a published poet) beginning with In the blood, and so Phillips’ questions about fate and forgiveness – a word that comes up in his work, as well as his comment on what he feels is the impossibility of such a concept, its sheer absurdity – ring with the urgency of someone struggling to survive their own desire without dishonouring it by crushing it because it is indomitable. This struggle generated his body radiating with poetry. Body is the right word: Eros says “the body surrenders to risk”, a “moment when the refusal to refuse cannot seem different from an incapacity to, although they are not identical – incapacity, refusal”. What does it mean to want someone? And again, drawing sharp distinctions. In a poem called “Morning in the Bowl of Night,” we come to this image of struggle and light:

Careful. Look
the shadows of the clouds moving on the ice which
sheets the pond, how they seem to move, too, just
under the ice, like something trapped there,
private and flourishing.

What is private and flourishing, what is trapped under the ice, is the illusion of the sky and the things moving in that sky and the promise of that vastness or depth. And we are bewitched. And if that sky, those clouds, and that ice are within us, which they are because they are imagined, then this book is both an ax to cut through that frost and fleeting wonder itself. It seems bottomless.

JESSE NATHAN: I’ve heard people refer to your work as “hectic”, and I’m never quite sure what they mean, although I guess I have some idea. I know you’ve written about it elsewhere, but I’m curious, does that word mean anything to you at this point? Do you have any idea what they might mean — and are you aware of it? And – it may be related – how do you think about where to break the lines in your poetry?

Carl PHILLIPS: Restless, restlessness… Yes, this has always been an important concept for me, and I have written several essays about it. But the short version is that human beings are, in my experience, constantly restless. It’s in our nature to want things, to be curious about what we don’t have, lives we don’t live but maybe could live, if only we changed our lives, if only we could… In my own poems I consider restlessness in the context of eros, but increasingly just the restlessness of thought itself, since we never think of a single thought at any given time. There is a constant whirlwind of information in play.

And since content informs, or always dances with and alongside form, I think that begins to explain how my sentences work, where a statement is often made, then reconsidered, then revised or perhaps rejected for another approach . Hence the hanging clauses, I guess, and the way the sentences work their way through the page. But how that connects to the crossover, I’m not sure. For me, enjambment is a way to create momentum down the page; stopping at unexpected places – places that leave the reader hanging, in terms of grammar and syntax – creates impatience – restlessness! here is the link! – which forces the reader to skip to the next line to find the grammatical/syntactic closure that feels like satisfaction, as if we’ve finally landed after spinning around a bit in the air. Or it looks like stability after a period of instability.

Not that I made any of this up, or that I ever think about it when I write a poem – really. Everything I just said is what I understood, after people asked me how my poems worked. I never really thought about it, since I write as I think, that’s how my thoughts come out. But it’s true that there is the most awkward part, where I spread the sentences on the page. I mostly achieve this by reading my draft aloud a few times, trying to hear where there should be a break, and determining if that break will be the break for a line break, a comma, a semicolon or something else. I want punctuation, line length, line breaks to work like musical notation, and I think of writing the form of a poem as a version of musical notation. Hopefully that should mean the way I hear the poem in my head will be the way a stranger reads the poem aloud. That’s the point. But since we all have different ideas about something as small as a line break – I believe a break follows a line break, many people don’t and read a poem as if it doesn’t. ‘there were no line breaks at all – I remember I’m always looking for a form for the same reason I write in the first place, to make something make sense to me.