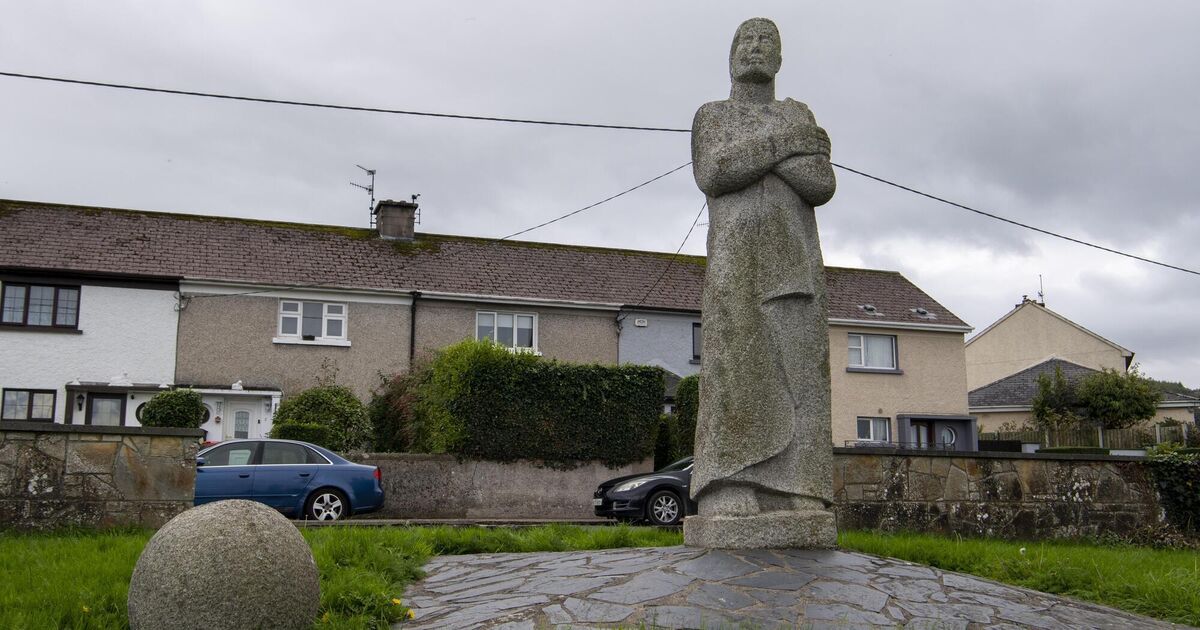 Father Michael O’Hickey was an Irish language enthusiast whose conflict with the Catholic hierarchy made him a notorious figure in the early 20th century.

O’Hickey supported the campaign for Irish to be made a compulsory subject for entry into the National University, unlike the Church, fearing that this would encourage students to enroll in TCD instead.

His vigorous speeches and letters in favor of compulsory Irish were seen as disrespectful to the bishops, who responded by dismissing him from his post as professor of Irish at Maynooth in 1908.

It was a shocking development and O’Hickey spent the next seven years in Rome, seeking reinstatement, but died in 1916 without the issue being resolved.

He was largely forgotten until an RTÉ radio documentary more than 60 years after his death resurrected his story, sparking a campaign to have him commemorated with a statue in his native Carrickbeg, a village in Co Tipperary adjacent to Carrick- on-Suir.

“A large collection of Father O’Hickey’s letters appeared in an attic in Carrickbeg in 1978,” says Micheál Ó Briodáin, who teaches English at the University of Helsinki in Finland.

“My mum was his niece, and she loaned them out for the RTÉ documentary, which aired early the following year.

“After that, people like poet Michael Coady started talking about commemorating Father Michael with a statue. My parents and others got involved and started a committee to raise money for the project.”

The committee chose Cliodhna Cussen, a noted sculptor and poet from Newcastle West, Co Limerick, for the commission. It was agreed that she would carve the work in granite.

A large crowd attended the unveiling of Cussen’s sculpture in July 1988. The Portlaw Pipe Band and the Carrick Brass Band both performed, while the main speaker was the Primate of All Ireland and former President of the Maynooth College, Cardinal Tomás Ó Fiaich.

“He apologized for the bishops’ treatment of Father O’Hickey. There might have been some clerics present who didn’t appreciate it, but anyway, in no uncertain terms, he said it was a disgrace.

Ó Faiich must have known that, technically speaking, the college statute that Father O’Hickey allegedly violated had not been enacted.

“The statute was about freedom of speech and what college staff could and could not say in public,” says Ó Briodáin.

“It had been promulgated in 1901, but was only valid for seven years. The 1907 statutes were never enacted or delivered to the teachers, so Father O’Hickey was removed from office on a charge that was not strictly speaking legal.

“His appeal to Rome was never heard by either side in court, but these days he would almost certainly get away with that technicality.”

The bishops also alleged that Father O’Hickey fomented anticlericalism and was supported by anticlericals.

“But there were very few anti-clerks in Ireland at that time, so it was crazy anyway. His own solicitor in Rome wanted proof of his good character, but his colleagues at Maynooth were afraid to give him references, unless the Vatican sends someone to interview them in person.

“An English cardinal was appointed to do this, but the bishops of Dublin did not like an Englishman to come, so Cardinal Logue was appointed instead.

“Cardinal Logue was the head of the Irish Church in Ireland, the same body that Father O’Hickey was bringing the case against, so it was very strange.”

Father O’Hickey is also said to have started a campaign of insubordination among student priests at Maynooth.

“There was something in the air back then, student priests were testing to see how far they could go,” says Ó Briodáin.

“But Dr Mannix, the president, blamed Father Hickey, which was probably unfair too.”

Father O’Hickey did not expect his appeal to Rome to take so long. He had already been there for three years when the campaign for compulsory Irish won in 2013.

“It was the only case where the laity defeated the bishops at that time,” says Ó Briodáin. It was unheard of. They were used to being important and they were made to feel very small.

At the outbreak of World War I, Father O’Hickey was stuck in Rome for two more years, while his appeal dragged on. He returned to Ireland in 1916, hoping to be appointed to a new office post, but died of a bowel disease at his brother’s home in Portlaw in November. He was 56 years old.

As is often the case with public sculptures, there was some discussion of how Cussen should depict Father O’Hickey.

“It was decided that the statue should not be too realistic, which gave the artist a lot of freedom,” says Ó Briodáin.

“It was a good decision, but the statue is open to interpretation. Father O’Hickey’s hands, for example, are crossed over his body, and he may be pleading, but he was more of a fighter than a litigant.

Cussen died earlier this year, so it’s unclear what her intentions were, especially with regard to the large granite ball at the feet of the statue.

“I understand Cliodhna found this dragging in a quarry at Wicklow. It wasn’t like dad Michael was playing in a football or anything, but Jack Charlton was very active with the Irish football team at that time, so maybe it has to do with that.

“The day after the unveiling, we went back to take photos and my mother sat on the granite ball.”

Ó Briodáin fears the statue has been neglected in recent years.

“The Council has always maintained the site, and it could be that everything has been stopped under Covid. But the hedge in front obscured the sculpture to some degree, and the sculpture itself could do with a good cleaning. I hope this will happen soon.