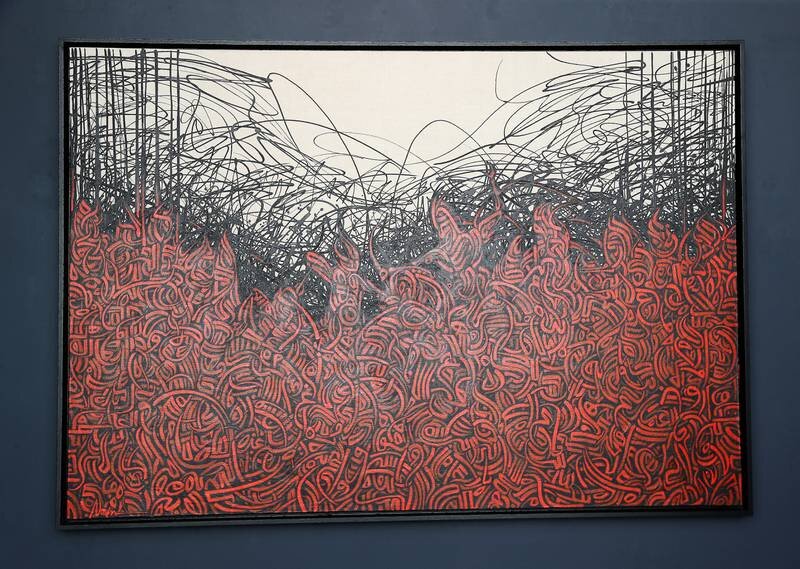 TEHRAN — Iranian artist Sasan Nasernia, deeply interested in playing with the tension between elements of order and chaos in his calligraphic paintings, is mesmerizing visitors with a collection of his works at an exhibition in Dubai.

The Mestaria Gallery is hosting the “Calligraphic Confluence” showcase, which will run until October 31.

“Writing is the first abstraction mankind invented,” Nasernia told The National, a local English-language news site that called the exhibit a journey into the power of words.

“When you assign a line to a sound, they are all words, which are codes of existence at the same time,” he noted.

The report also states that the written word in the exhibit is not only a means of recording and communicating, but also a vehicle imbued with ideas, feelings and energy.

Arabic calligraphy, in particular, has a long history as an art form and is used as ornament in architectural, decorative, coin and book designs. Nasernia’s exhibition, which features canvases of varying sizes, draws on Arabic and Persian influences to create a captivating set of works.

His style evokes strong emotions, even if you can’t decipher the calligraphy, because of the way he paints them.

Clean, minimalist backgrounds give way to an explosion of painted gestures. Layers of black and primary colors create a dynamic feeling of pushing and pulling. And amidst the chaos, there is a sense of balance.

“You can’t dwell on much when creating these; it must be fast. If you watch me do it, each layer has to unfold very quickly, because the speed gives you the dynamism that ultimately is there,” explained Nasernia, who has worked as a graphic designer for 18 years.

“I’m interested in doing different styles and exploring different avenues, especially if there’s something that hasn’t been done before. Things that were done perfectly by the old masters,” he said.

Nasernia channeled the sense of drama, climax of movement and entanglement of elements from the miniatures he studied into Persian poet Ferdowsi’s epic masterpiece, Shahnameh (The Book of Kings), in his work.

Each canvas reveals a scene of juxtaposition: traditional and contemporary, chaos and order, movement and stillness, moments of violence and stillness, good and evil – the viewer feels Nasernia’s immediate sense of capturing this battle and balance.

“Good and bad are two sides of the same coin,” he says. “But the balance must always be maintained.”

Photo: “Mayhem I” by Sasan Nasernia is shown during an exhibition at the Mestaria Gallery in Dubai.