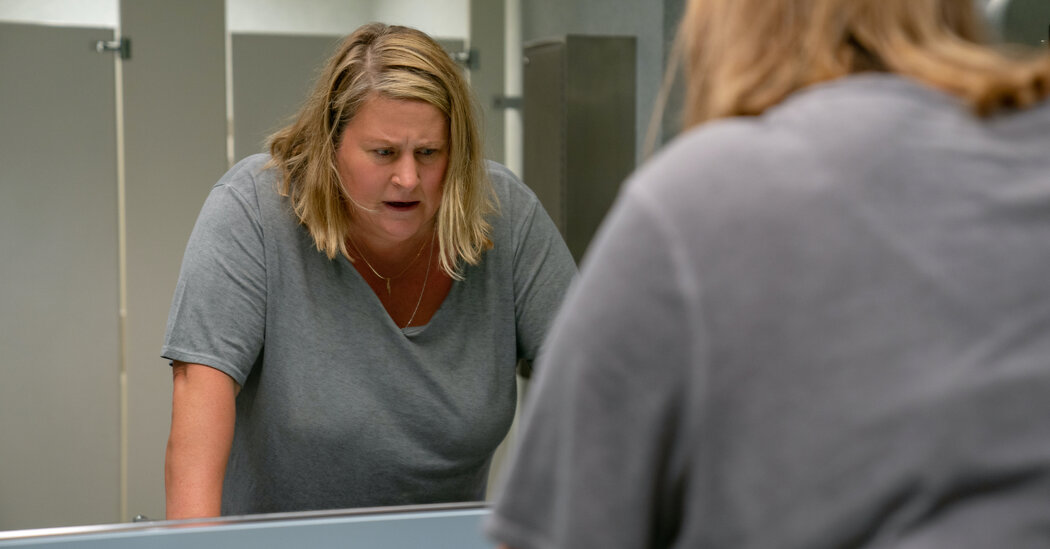 When we meet Sam, the 40-something protagonist of HBO’s comedy-drama “Somebody Somewhere“, she’s returned to her hometown, Manhattan, Kan., to care for her dying sister — and finds herself stuck there, single, unhappy, struggling with aging parents and a dead-end job. While his other sister runs a tchotchke shop and his friend Joel creates visionboards, Sam seems to be moving away rather than toward middle-class objects of aspiration: marriage, children, job security.

At one point, she tells Joel that she’s going to spend a Saturday writing down her goals and accomplishments, before laughingly admitting her real plans: “I like to lay there drinking wine in my underwear.”

And why not? It’s a relief to see the women of small-screen comedy and drama turning their backs on ambition, personal growth and self-actualization. From “Enlightened” to “Broad City”, from “Girls” to “I May Destroy You”, the female protagonists scoff at expectations that they are hardworking and socially responsible, instead gravitating towards indolence and self-sabotage. They quit their job when they are bored; they reject stable relationships, gainful work and even personal dignity.

It might seem dangerous to celebrate all that narcissism, recklessness, and laziness, but it’s also liberating: who among us hasn’t wanted to give up a boring job and set our wellness plans on fire? We were already exhausted before the lockdowns and daycare closures; now, nearly two years into this pandemic, “it feels like our whole society is exhausted,” wrote Noreen Malone in the New York Times Magazine.

“Somebody Somewhere” is a far cry from the single girl sitcoms of the past, which generally followed the arc of the bildungsroman, in which the protagonist develops autonomy and self-respect, ready to take on the challenges of becoming an adult. Rather, these new stories are versions of what feminist scholar Susan Fraiman calls “inappropriate” narratives, featuring protagonists who undermine their own growth and upbringing, and are more likely to be mired in failure than to strive for alliances and corner offices. .

Women anti-heroes in mythology and literature have typically been murderous (Medea), scheming (Lady Macbeth) or unsympathetic (Scarlett O’Hara). Those who transgress societal norms, like Edna Pontellier from “The Awakening” or Lily Bart from “The House of Mirth”, often ended up dead – not surrounded by a community of like-minded misfits that Sam joins. in “Somebody Somewhere.” That’s where the recent TV comedy antihero tends to find his happy ending: in true community and friendship. There’s something heartwarming about this new female figure and seeing her win on her own terms.

Obnoxious slackers are quite common in male-centric TV comedies. Jerry Seinfeld, Larry David and Louis CK are each defined by their selfishness and incompetence. But similar traits play out differently in women; Viewers may not like these male characters, but they’re not sending the actors death threats like the ones “Girls” creator and star Lena Dunham said she received. The transgression of gender norms by female protagonists in “inappropriate” narratives seems to anger viewers who desire conformity and likability in women.

It’s essential. Because audiences expect cheerful competence from women while tolerating laziness, violence, and rule-breaking in men, the female antihero poses a much deeper threat to the status quo.

This status quo, established by the single girl sitcoms of the last century, was in its time revolutionary, allowing women their own bildungsromans and turning the smart, sassy career woman into a cultural icon. The story begins with “The Mary Tyler Moore Show”. Created in 1970, it follows 30-year-old Mary Richards as she moves to Minneapolis, leaving her commitment-phobic boyfriend behind. She applies for a job as a secretary in a television channel, but she finds that it is filled. Her sunny temperament earned her instead a place as associate producer. When Mary’s ex-boyfriend recognizes her mistake and tries to win her back, she quickly shows him the door. “Take care of yourself,” he told her as he left. “I think I just did,” Mary replies.

The single girl TV comedies of the 1970s, 80s and 90s continued in this vein: “Murphy Brown”, “Designing Women”, “Living Single” and “Sex and the City” centered on courageous heroines committed to their careers. while energetically seeking romantic relationships. More recent shows such as “New Girl,” “Unbreakable Kimmy Schmidt” and “Ugly Betty” have offered contemporary versions of the formula by focusing on high-spirited young women who triumph over adversity. Characters like Liz Lemon from “30 Rock,” Leslie Knope from “Parks and Recreation,” and Mindy Lahiri from “The Mindy Project” might be messy and demanding, but they’re also professional and mobile, sporting cute outfits and respectable jobs. .

Some 40 years after “The Mary Tyler Moore Show,” in 2012, Lena Dunham changed the narrative with “Girls,” one of the first and most influential “inappropriate” stories. It also features a single young woman who sets off on her own in search of love and opportunity, but that’s where the parallels end. Mrs. Dunham’s Hannah Horvath moans and pushes her way through a landscape of millennial rights. Her prioritization of her own happiness is as transgressive and seductive as her shameless and frequent nudity on camera.

Hannah does not share Mary Richards’ courage or self-respect. “No one could ever hate me as much as I hate myself,” she confessed to her best friend during the show’s first season. Unlike Mary, whose effervescent optimism guarantees she will always come out on top, Hannah often rushes to the bottom. While Mary talks about a cool job and hustle with her prodigal boyfriend in the series’ first episode, Hannah gets kicked out of her unpaid internship and tolerates petty humiliations from her ruthless love.

The past few years have seen more and more examples of this new type of female character – narcissistic, broke, and wary of optimism. Shows like “Fleabag,” “SMILF,” and “This Way Up” are products of the post-recession culture of the past decade and a half when so many people struggle financially and hard work and driving no longer seem to ensure success (if, indeed, they ever did). If so many of us are burning out for companies that treat workers as disposable, why not just kick back like Sam and drink wine in our underwear?

The heroine of the “inappropriate” tale puts her sympathy at risk, a phenomenon amplified for women of color, as illustrated by negative comments online about her appearance as Michaela Coel, the black British writer, actress and creator of ” I May Destroy You,” lasted. Perhaps that helps explain why so many female antiheroes in TV comedy are white. Worse, their jitters are often defined in relation to more stable characters of color who play acolytes and foils, if present.

In the Hulu comedy “Single Drunk Female,” for example, white protagonist Samantha is surrounded by capable black characters, from her rehab therapist to her parole officer to the bar clerk who gives her a bucket so she won’t. spray vomit on the wall (again). When Samantha indulges in abjection, her whiteness protects her from contempt.

Samantha, like Sam from “Somebody Somewhere”, is not a model. But that’s precisely the point: At a time when women are encouraged to rule the world, or, at the very least, expected to keep it together in a still fragile Covid economy, “unseemly” heroin is a timely reminder that women don’t need to be responsible, self-improving and productive to be valued.

And the unseemly plot arc thankfully doesn’t lean to fate. Indeed, a different kind of redemption awaits the woman who makes room in her life for less conventional priorities. Sam finds it in friendship and in the community of theater nerds and LGBTQ people at Joel’s weekly “choir practice”.

“I don’t know if I’m really a friend,” Sam confides to Joel at one point. He replies, “I think you’re going to surprise yourself.”

Sarah Hagelin and Gillian Silverman are associate professors of English at the University of Colorado, Denver, and the authors of “The New Female Antihero: The Disruptive Women of Twenty-First-Century US Television,” from which this essay is adapted.

The Times undertakes to publish a variety of letters For the editor. We would like to know what you think of this article or one of our articles. Here is some advice. And here is our email: [email protected].