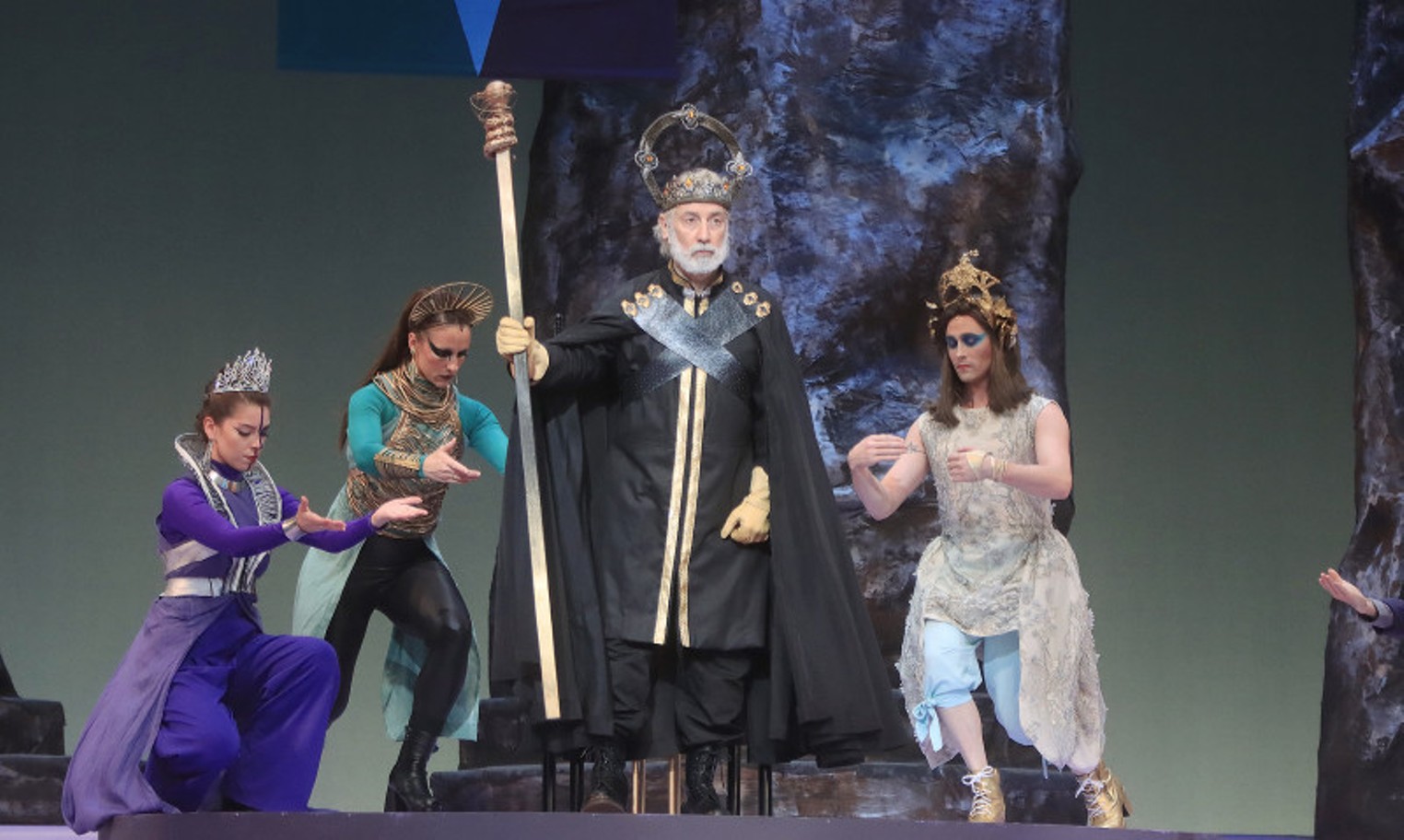 When our esteemed Houston Shakespeare Festival stays true to the spirit and tenor of Shakespeare, the results can be awfully good, almost excellent. The indomitable tragedy King Lear is in good hands this 47th season, a touching production in which everyone invests the most.

Lear’s landscape is dark, broken. Kindness is punished, morality has a price, loyalty is trampled, vanity is worthless, children are venal and the old go mad. It’s the very definition of tragedy, the Greek genre cast in heaven by Shakespeare’s genius in plot, characterization and empyreal poetry. Hamlet maybe more subtle, but Lear possesses unquenchable power and heat. One cannot fail to be moved by the old king and his wounded pride which beats him down.

This production lasts less than three hours with an intermission – for an order of fries, or a bucket of popcorn, a hot dog, beer or wine – all the smells wafting through the open-air auditorium of the Miller Outdoor Theater as the sublime Shakespeare plays on the stage, but the play passes as if on fire. Even the sweltering heat is forgotten, if not forgiven.

This holiday atmosphere is very Globe Theatre, Shakespeare’s own place that had earthlings munching on hazelnuts and oranges while Lear’s storm raged with its “Blow out the winds and crack your cheeks!” The added surprise of this version is another genuine nod to Elizabethan theatre, the pervasive tradition of cross-dressing when women were banned from acting. Wesley Whitson (one of Houston’s most surprising actors) plays Cordelia, Fool and Lear’s favorite daughter. He is superb in both roles, nimble and quick as the old man’s jester, then gentle, intelligent and assured as the banished girl. Some in the audience were surprised, then delighted, at the curtain call when Witson in Cordelia drag put on the Fool’s cockscomb hat to let them know he had played both roles.

Old Lear (a mighty Jack Young [HSF’s artistic director], raging with betrayal, moaning with his helplessness), still vigorous but wanting to fade away, divides his kingdom between his three daughters if they swear their love to him. Goneril (Lauren Senechal) and Regan (Laura Frye Banovez), liars, profess undying love. Cordelia, his favorite, won’t play his game. She says his love is as it always has been. In a blind rage, Lear disowns and banishes her, which begins the relentless downward spiral of his life. The courtier Kent (Andrew Garett) supports Cordelia, but her protests banish him as well. The eldest daughters conspire against Lear, mock and abuse him, and drive him away in the storm. His madness begins.

In a side plot, loyal courtier Glouchester (Kenn Hopkins, Jr.), another father, is presented by his illegitimate son Edmund (a brilliant Iago-like portrayal by Caleb Clark) as a traitor. Glouschester’s “good” son, Edgar (equally captivating Kyle Clark) escapes betrayal and poses as the traveling beggar “Tom o’ Bedlam.” Events go from bad to worse. [What the hell was going on in Shakespeare’s life at the time?] Glouchester is caught, blinded and thrown into the wilderness for Edgar to find. More betrayals ensue; letters are stolen or forged; Edmund makes love to both girls, then is killed by his own brother in a duel; Goneril poisons Regan out of jealousy and then stabs himself. However, Lear and Cordelia, fighting with the French against the traitor girls, have been captured and, on Edmund’s previous orders, are to be killed. In his death confession, against his own nature, Edmund reveals his fate, and when the others rush to save Lear and his daughter, the old king enters carrying Cordelia’s corpse. He groans at his madness and dies over his corpse.

Lear is relentlessly dark, driven by the wit of the madman, the juggernaut of a Shakespearean plot, its brilliant psychological insights, and high quality acting, all under the whiplash direction of Stephanie Shine. The production is set against the megaliths of Stonehenge to mimic ancient Britain, by designer Jon Young, lit by Christina Giannelli as if with storm clouds, and featuring lush sound and music design by Andrew Lynch. The recognition scene between Lear and Cordelia, where the sad old king comes to his senses, is punctuated by an evocative offstage piano lullaby that adds depth and emotion. Afsaneh Aayani’s costumes end up pushing on you, a mix of Goth and sci-fi Flash Gordon. They certainly have an alien look, as befits the pagan setting.

One of HSF’s most satisfying productions over the seasons, Lear is terrific drama, an outburst of heartbreaking family conflict, as relevant today as when it was written, c. 1604-05. If there’s a moral to madness, maybe it’s: don’t demand to be loved; let your heart open so that love can be received.

Tickets for covered seating are free, but covered seating near the stage requires advance reservation. You can get your tickets online here from 10 a.m. one day before the show date until noon on the day of the show. You must be 16 or older to order tickets. Each person is entitled to a maximum of 4 tickets. The box office, located at the northeast corner of the theater, will be open one hour before the start of the show. No late seats for covered seats.