Raphael at the National Gallery – why is he still considered so great? 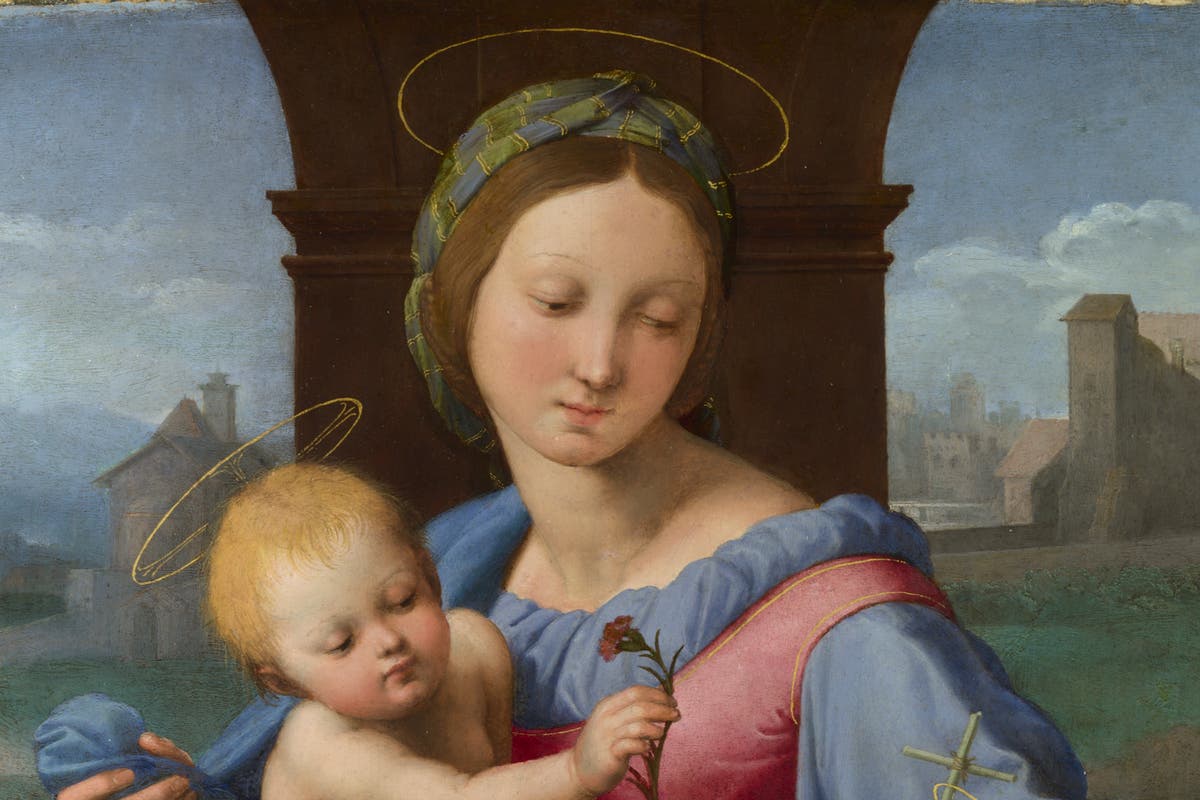 there are relatively few artists whose greatness was recognized in their time and whose reputation has remained unchanged since: Raphaël is one of them.

Georgio Vasari, the painter-biographer who tells us most of what we know of him, observed that “When this noble craftsman died, the art of painting might well have died too, since when he closed the eyes, she had remained as she was, were blind… For verily we have of him art, coloring and invention harmonized and carried to a degree of perfection which could hardly be hoped for; and no intellect can ever think about overcoming it.

This reputation has remained in our time: Kenneth Clark, of Civilization fame, observed that Raphael was “one of the civilizing forces of the Western imagination”. Today, remember, Raphael’s best-known figures, on which a major exhibition will soon open at the National Gallery, are probably the whimsical cherubs at the base of his Sistine Madonna, who feature in countless reproductions in all formats, sometimes smoking a huge joint.

Raphael was born in 1483 to a father, Giovanni Santi, who was an artist and poet from the small but cultured court of Urbino, near the top of the calf of the Italian boot, and insisted that his son be breastfed at the home rather than entrusted to a peasant nurse. Raphael’s loving mother died when he was eight; his father when he was 11 years old and he was raised by his father’s brother, a priest.

He grew up then, in a loving family but suffered the first losses which led to an idealized vision of family life, to which some critics attribute his tender Madonnas. What Vasari puts forward is his easy and graceful manner: the ideal courtier of the time. Santi apprenticed him to the respected artist Pietro Perugino in Perugia, whose style he assimilated; then in Florence he learned from Fra Bartolomeo and fell under the overwhelming influence of Leonardo da Vinci.

Later he traveled to Rome where he met Michelangelo, which inspired an artistic rivalry with the pugnacious older artist. Raphael was favored by two patron popes, Julius II and Leo X, and commissioned by the fabulously wealthy banker, Agostino Chigi. But his career was tragically short, lasting only 20 years (he was only 37 when he died). Nonetheless, it left a lasting influence on his own generation and on subsequent generations.

The next National Gallery exhibition would be unmissable if it only included his paintings. But this exhibition is complete; it deals with his entire career (Raphael’s last show presented his first works there) and all its aspects. As the exhibition’s co-curator, Tom Henry, told me (over breakfast at the Vatican, since you ask), “this is the first exhibition outside of Italy that includes all aspects of Raphael’s career…painting, tapestry design, architecture and printmaking.” Impressions Apparently yes.

“Raphael understood the potential of this new technology to disseminate his work to a wider audience, and took advantage of it.” Thus, the show will include drawings to be engraved by his collaborator, Marcantonio Raimondi. Raphael’s interest in engravings was sparked by the works of Dürer, whom he knew (another recent exhibition at the National, Les Voyages de Dürer, touched on their relationship).

We meet Raphael as a tapestry designer and surveyor – he surveyed the antiquities of Rome for the Pope and we see his famous letter complaining of “the shame of age”, his contemporaries looting Roman remains. Also, Raphaël, architect. Eh ? Yes, on his tomb in the Pantheon in Rome, he is presented as an architect as much as a designer, and he was co-architect of Saint-Pierre. He was both literally and figuratively what we used to call a Renaissance man or, as Vasari puts it, universal ottimouniversal genius.

The exhibition will feature beautiful architectural drawings, including one for the Villa Madama – an out-of-town residence for the Medici – as well as paintings, such as the Engagement of the Virgin, where the building is at the center of the composition. He also designed sculptures and metalwork (including grotesque faucets for a cardinal’s bathroom); we will see two beautiful circular bronze reliefs which he executed for his fabulously wealthy patron Chigi, for his memorial church (although they never did it there) and which have never been shown outside of Italy.

It is a challenge to depict all aspects of a career that arguably reached its peak in the private apartments or Stanze of Pope Julius II in the Vatican and the tapestries that were to hang in the Sistine Chapel, to rival the ceiling by Michelangelo. But the conservatives managed to represent them too. Tapestries representing the Acts of the Apostles, made in Flanders, we get the preaching of St. Paul in Athens, and the cartoons, the designs on which they were based, are right here in London, at the V&A, and these are reproduced digitally in the exhibition.

There will also be an entire room devoted to the papal apartments he decorated for Julius II, including the papal library where Raphael performed his most famous work, the depiction of theology, philosophy, law and the arts, all harmoniously linked – in short, the entire Renaissance project in one piece. Here we have a life sketch of the marvelous figure of Diogenes in The School of Athens, the one sprawling on the steps. And the psychologically insightful portrayal of Pope Julius in the same room wasn’t far ahead; it is one of nine paintings in the gallery’s collection.

Broadly chronological, the show will describe Raphael’s journey from Urbino to Perugia to Florence to Rome, and in this, an aspect of his genius – to assimilate the style of other artists. At first it was Perugino, then in Florence it was Leonardo da Vinci – here there is Raphael’s copy of his Leda and the Swan, as well as a study of a young woman in which he channels the Mona Lisa – while in Rome his work was transformed by Michelangelo (there is a story in Vasari about him being smuggled into the Sistine Chapel when Michelangelo was out of town and absorbing the revolutionary figures on the ceiling – the master never wasn’t too happy about it).

However, perhaps the works most associated with Raphael are his depictions of the Madonna and Child and there are some very fine examples coming to London from his stay in Florence and his early years in Rome. Some, like the Madonna of Alba, representing the Virgin with Christ and the little John the Baptist (from an episode in the apocryphal gospels), are in the shape of a tondo, the round format in vogue in Florence; in some, the cradling arms echo the circular form. Even the reproductions on countless Christmas cards cannot quite take away the charm of these works.

But does there come a time when serenity wavers? Tom Henry, the curator does not think: “This serenity is the eternal gift of the artist, and if we are open to it, Raphael can lift our hearts. Even in scenes of brutality and horror, like Christ carrying the cross, Raphael gives us grace, beauty and glorious color – none of the dirt, agonizing humanity of the Flemish masters here. His deposition of Christ, however, showing the weight of Christ’s body and the pressure exerted on the man lifting him up, was very different from what had happened before.

It was the serenity and harmony that characterize Raphael that repelled John Ruskin, who wrote of the frescoes in the papal apartments: “The perfection of execution and beauty of line which has been achieved in these works and in those of his greatest contemporaries, made finish of workmanship and beauty of form the chief objects of all artists; and henceforth workmanship was sought rather than thought, and beauty rather than truthfulness.

Well, if the finish of the execution is a problem, see Raphael’s sketches. They have the spontaneity and liveliness that paintings inevitably lack; the sketch of the Madonna d’Alba is lively and dynamic. Raphael was a great draughtsman and his finished drawings are among his finest pieces. We see here two surprisingly accomplished drawings, self-portraits, which he made when he was only 16 or 17 years old.

The last room of the exhibition will be devoted to his portraits, works of psychological penetration. Among them, two female portraits: the Donna Vellata or Veiled Woman, with a confident look, and La Fornarina, a sexy, barely dressed woman with a beautiful headdress who would have been his mistress (her name is on a band on her arm). A sketch of a female nude suggests that Raphael, unusually, drew women from life, at least towards the end of his career. According to Vasari, he had a thing for ladies – and looking at his photos, you don’t need Vasari to tell you that.

The tragedy of course is that his career and his life were so short. As Vasari said: “pursuing his loves in secret, Raffaello continued to amuse himself beyond measure with the pleasures of love; whence it happened that, having once indulged in more than his usual excesses, he returned home in a violent fever”. Alas, his doctors bled him too heavily and he died. Yet the manner of his death – which may or may not be entirely accurate – did not prevent him from being considered the most Christlike of artists; above his deathbed his friends placed his glorious Transfiguration of Christ. The divine Raphael indeed.

The exhibition Credit Suisse: Raphael is at the National Gallery, from April 9 to July 3, nationalgallery.org.uk