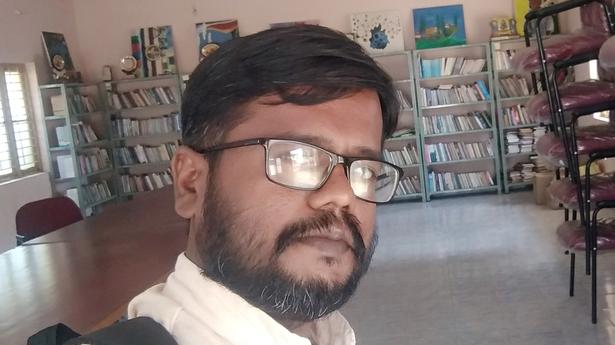 Public primary school teacher Veeranna Madiwalar, who received a notice from the Department of Education for speaking her mind about the state government’s policy on school mergers, says she does not broke no law.

“I did not criticize any policies of the state government. Nor did I oppose his plans or actions. I only expressed my concern about the state of education, as a concerned citizen and poet,’ he said.

“A few days ago I wrote a poem about the government’s announcement of its intention to merge more than 13,800 schools. That means almost a third of the state’s total public schools will be closed. I was worried and worried about it. When public schools close, it is children from lower classes, Scheduled Castes and Tribes and minority communities who suffer,” he said.

“When some schools in the ashrama were closed a few years ago, children from nomadic communities had to leave school because they were deprived of access to education. Similarly, when some OBC hostels were closed, several young people from backward classes had to drop out of college,” he said.

“I fear that if the merger project goes ahead, students, especially those in backward classes, will suffer. I felt sad and discouraged and out of concern for the lower classes, I wrote a two-line poem and posted it on social media. I didn’t break any rules,” he said.

His article describes the idea of ​​the merger as “spelling the death knell” of public schools and “slaughtering” the educational future of poor rural students.

Mr Madiwalar said he had not yet received a copy of the notice which would have been issued by the state government. “Once I receive it, I plan to give a detailed response. I maintain that I have not broken any rules. I have neither objected to the government’s plans nor criticized its policies,” he said. he declares.

In a new social media post, Mr Madiwalar explained his stance and defended his previous posts. He said he was concerned about the poor and disadvantaged sections of society who would suffer if rural schools were closed. This post was widely shared and also received several likes and comments.

Mr. Madiwalar is the Headmaster of Ambedkar Nagar Government Primary School at Raibag in Belagavi District. He has won awards for his teaching and for his leadership in school.

With the help of local Member of Legislative Assembly P. Rajeev and some philanthropists, he built a language lab named after writer Shivaram Karanth. He raised money to buy additional land for the school, build a perimeter wall and a toilet block for the students.

A postgraduate degree holder in English Literature from Central University of Karnataka, Kalaburagi, he is an accomplished writer with several collections of poetry and works of fiction to his credit.