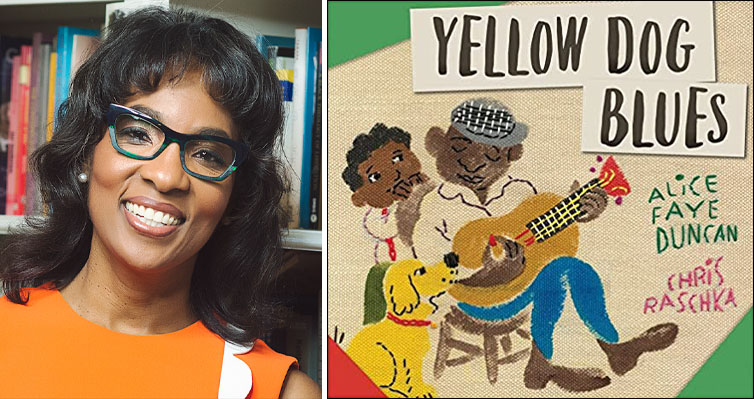 As a lifelong teaching librarian, Alice Faye Duncan sowed the seeds of lifelong learning and a love of reading. As a children’s author/poet, she plants stories that aren’t often told or talked about in children’s picture books. His books for young readers include Opal Lee and what it means to be free: the true story of Juneteenth’s grandmother (illustrated by Keturah A. Bobo), Forced out! The struggle for the right to vote (illustrated by Charly Palmer), and his forthcoming book, Yellow Dog Blues (illustrated by Chris Raschka). PW spoke with Duncan about how her careers as a teacher librarian and children’s author are intertwined, why she feels called to write about difficult and painful times in American history, and what her hopes are for her books and their readers.

Which came first: writing or becoming a teaching librarian?

It was writing. As a child, from the third year, I was always writing stories and poetry. Then when I was in sixth grade, a poet named Etheridge Knight, who was a student of poet Gwendolyn Brooks, came to my school, Snowden Elementary School, in Memphis. He read poems and talked about poetry, writing and books. It was only then, with a real writer/poet in front of me, who told me that I could also be a poet, that I said to myself, “I’m going to be a writer.

Learning that writing could be a career for me took me through elementary school, middle school, and high school. But once in college, it was time to think about earning a living. When I graduated with my undergraduate degree in English, I quickly realized that writing wasn’t going to pay the bills. So, with my parents’ encouragement, I went back to school to get my degree in library science to become a librarian.

After library school I worked in a public library and my dad suggested I go back to school to get my teaching degree – he and my mom were educators – because I wasn’t earning that that I would earn as a teacher in a public school. And, for the past 30 years, I have served students in the city of Memphis.

What did you enjoy most about your job as a teaching librarian?

I especially enjoyed interacting with children, inspiring their reading lives, and following what was popular, timely, and relevant in children’s literature. I also loved to celebrate and inspire students who preferred to sit in the library and write poems, as Etheridge Knight inspired me. Working in schools influenced my writing and the topics I chose to write about.

How has your role as a teaching librarian influenced your writing?

I was able to study the books, literature, and curriculum, and I was able to assess resources and identify holes and gaps in the curriculum. for my book Memphis, Martin and the top of the mountain [on Dr. Martin Luther King Jr.]i spent 15 years trying to write it in a collection of personal narrative poems [a mix of free verse and haiku poetry] to fill a void. Being from Memphis, I was able to conduct interviews with various alumni who had helped strategize and organize the sanitation strike, and who had also walked with Dr. King. I knew I was writing something so necessary, and that kept me going.

Where did your research and writing take you next? How have they impacted your work as a teacher/school librarian?

The two have truly become one. This is what I have enjoyed most about my work because my role in education has inspired my art – my research and my writing – and art has inspired my teaching and library work. So whatever I found myself looking for at some point, I incorporated it into my library programming and teaching. This included my book Expelled: the fight for the right to vote. During the three years it took to research and write the manuscript, my library programming focused on the right to vote. I invited sanitation workers and farmers from the 1950s and 1960s to our school and they talked to the students. My program also involved working with the principal to bring people to our school to help parents and students who were of voting age register to vote. Inevitably, all my research found its way into my daily teaching! Working this way was exhilarating, rewarding and seemed destined to me, like a vocation. And when that season was over, the Lord said, “OK, now there’s something else for you to do. There is another way to educate and teach. I came to understand that it was my calling to write and use my books as a source of inspiration, enlightenment and entertainment for young learners. Last year I retired from teaching to follow that calling and write full time.

Can you tell us more about your interest in difficult and painful subjects for young children? What are your hopes for your books and your readers?

Also, I write about role models for readers to follow: brave people like in my book Opal Lee and what it means to be free: the true story of Juneteenth’s grandmother. I know stories of bravery can inspire children. I hope my readers will see that when Opal Lee helped make Juneteenth a national holiday, she was a committee of a. She started walking and campaigning on her own in 2016. Of course, some people joined her as she continued on her way. But she didn’t wait for a whole bunch of people to join her to decide to march for what was important to her. She knew that if you wait for the group, you won’t be able to do anything.

Can you tell us about your next book Yellow Dog Blues?

Yellow Dog Blues is what I would call a fable of the blues. It fills a gap on the blues and the view of the Mississippi. Often people might think of Mississippi as a place of darkness, injustice, and racism. And, while they’re not entirely incorrect, there’s also another side to the coin that we can’t deny or ignore: its cultural relevance to America and its music. American music rests on the shoulders of Mississippi. This is where the Delta blues began, which gave us the electric blues of Chicago. It is not only a place of darkness, ugliness, but also a place of beauty, importance and culture.

Where did the idea for this Mississippi and blues love song come from? How did you compose it and how did Caldecott Medalist Chris Raschka join the band?

The idea came to me around 2014 when I received a National Endowment Teachers’ Fellowship to study Civil Rights and American Blues Music in Cleveland, Mississippi. When I finished the program, I thought I was going to write a book about the Boll. The weevil blues and the boll weevil outbreak, but that didn’t happen. Another idea that came to me Yellow Dog Blues, a story about a dog that runs away from home and a little boy who owns the dog and follows it down what is called the Blues Trail or the Blues Highway, which is Highway 61. I wrote and rewrote it several times. In 2016, when there was such a racial divide, I decided to write a book that was an expression of racial reconciliation. I thought I could write this book and partner with a white illustrator and we could do something intentional about it. I contacted Chris Rachska through Richard Michelson because I knew Chris had done Charlie Parker played Be Bop, and other picture books that I like. When we connected, I explained why I wanted him to illustrate it. Then he read it and made a storyboard for the manuscript. Then we shopped it at a few publishing houses [before landing at Eerdmans].

The good Lord touched Chris with inspiration to come up with something I’ve never seen done in picture books before. It’s new, it’s fresh, and it sticks to the spirit of the text as well as the tone of the story. That’s because when you say rural Mississippi, you mean a place full of practical, homemade things. The people are from here, the music is from here, everything is homemade. So, as our readers will soon see, this story with my text and Chris’ illustrations, really does look and feel like a quilted, musical experience!