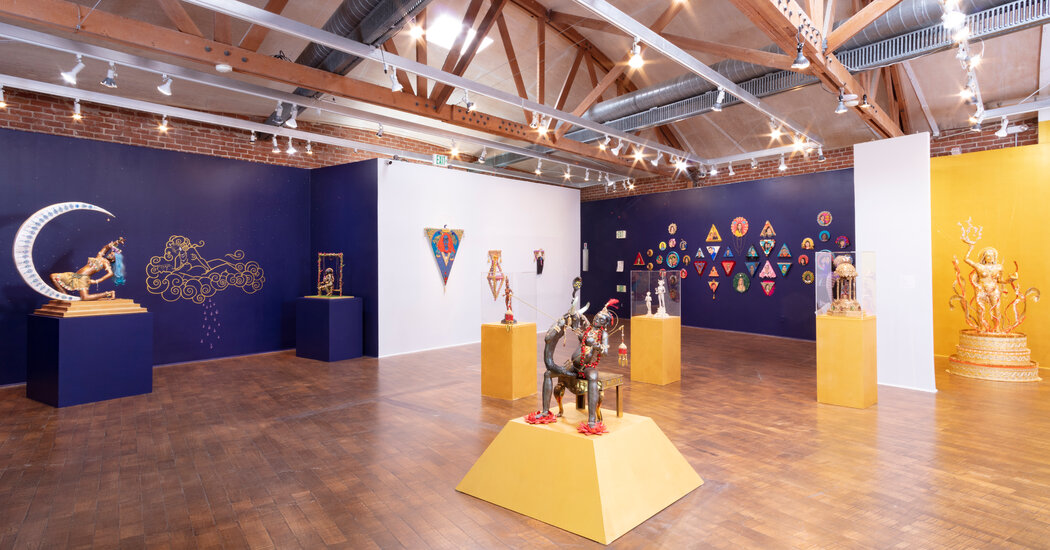 LOS ANGELES — Some of Jaishri Abichandani’s works are so palpable that they evoke a strong sense of touch just by looking at them. The centerpieces of “Flower-Headed Children,” her solo exhibition at Craft Contemporary, are figures sculpted from polymer clay and adorned with petals and jewels. They appear to be handmade, with an attention to detail that seems as pleasing as it is painstaking. Filled with color – including blue and gold painted walls – and beautiful traditional materials, the show revels in visual abundance. It reminds you, in case you forgot amidst an endless stream of Zoom meetings, the delights of physicality.

Abichandani, who is based in New York, moved from Mumbai, India to Queens when she was 14 and studied art as an undergraduate. If you know her, it may be for her tireless efforts as an organizer and curator, rather than her dynamic work as an artist. After university, she founded the South Asian Womxn’s Creative Collective, which celebrates its 25th anniversary this year, and from 2003 to 2006 was director of public events and projects at the Queens Museum. She crafted a powerful trio of exhibitions to inaugurate the Ford Foundation Gallery in 2019 and in 2017 staged a #MeToo protest outside the Met Breuer when the museum held a retrospective of Indian photographer Raghubir Singh, who Abichandani says sexually assaulted in the 1990s. in India. (Singh died in 1999 and her allegations did not go to court.)

Curated by South Asian writer Anuradha Vikram, ‘Flower-Headed Children’ is Abichandani’s first museum survey, collecting 75 pieces, though most of them are from the last five years – an indication, perhaps. , a recent shift towards focusing on her own work rather than that of others. The history, politics and culture of Abichandani’s home country form one of the conceptual cores of the show. In many of his sculptures, the artist riffs on Hindu and pre-Vedic imagery, depicting his own versions of goddesses and spiritual beings who strike sculptural poses and appear on pedestals, naked but for their headdresses and jewelry. Abichandani also uses prominent symbols like the lotus flower, which traditionally has sacred associations with Hindu gods but has been adopted in recent decades by the right-wing Bharatiya Janata party.

At the same time, his work is rooted in the diaspora. (Both Abichandani and Vikram are from Hindu families displaced during the partition of India in 1947.) The “Jasmine Blooms at Night” series (2017 – ongoing) highlights South Asian activists in the United States ; 45 of the whimsical little portraits fill one wall of the museum, creating the feeling of a space of devotion and awareness. More broadly, Abichandani’s take on classical Indian art is resolutely contemporary and inspired by members of the queer, activist and feminist communities to which she belongs. For example, “Raat ki rani (Queen of the Night)” (2019) features a fabulously ornate figure dancing with a crescent moon and features a playful mix of gender markers: long blue hair, acrylic fingernails and leg hair. dark. ; a nose ring, a bindi and a beard. It could be a drag queen—portraits of several hang on the opposite wall—or just a nonconforming drag queen.

“​​Raat ki rani (Queen of the Night)” demonstrates the fluidity and complexity that drives Abichandani’s best works. Her handcrafted goddesses look mythical but all too real, like the roughly two-foot-tall figure in “Trinity With Mother” (2021), who literally wears her matriarchal lineage – represented by female heads – atop her own. head and in his hand. She exudes the poise and calm of a deity, but the scar on her thigh and the cigarette between her fingers make you wonder what realm she lives in.

Nearby, the woman from “End Game” (2018), not quite life-size but one of the series’ greatest works, struggles with a bull-headed figure emerging from her -same. They both hold tridents and she holds a dagger to the back of her head. It can serve as a geopolitical allegory, if you read the signs, like the lotus flowers under the woman’s feet: perhaps this is a Hindu goddess trying to crush the violent nationalism that has been taken over in the name of his religion. As with so many of Abichandani’s works, the drama and beauty are enhanced by the references (and I wish there was more wall text to explain them).

“End Game” is perhaps my favorite piece of the series, as it captures the duality that is at the heart of “Flower-Headed Children.” As soon as you enter the exhibition, the main gallery dazzles you. It’s a visual celebration of – perhaps even a temple to – a kind of divine feminine energy that has ancient, religious origins, but has been given a weird, centuries-old update. You would find it hard not to appreciate its materiality and ingenuity.

But there’s a second gallery off to the side that holds darker works, including videos of protest performances curated by Abichandani and evocative wall designs made from Swarovski-studded whips. This space contains a showcase with a small solitary figure, hand-sculpted in polymer clay. Entitled “Predator at Rest” (2017), it depicts a naked man lying in bed with a camera by his side: a representation of photographer Singh. It’s a brave work that took my breath away – an intimate scene that looks peaceful but is actually full of complex power dynamics and vulnerability.

The atmosphere of the second gallery tempers the festive air of the first. Yet the works on both sides of the wall seem inextricably linked. Abichandani resists the patriarchal world by presenting a feminist vision of abundance. She knows that activism is about more than protest – it’s about bringing fun and joy even, or especially, when those things seem rare.