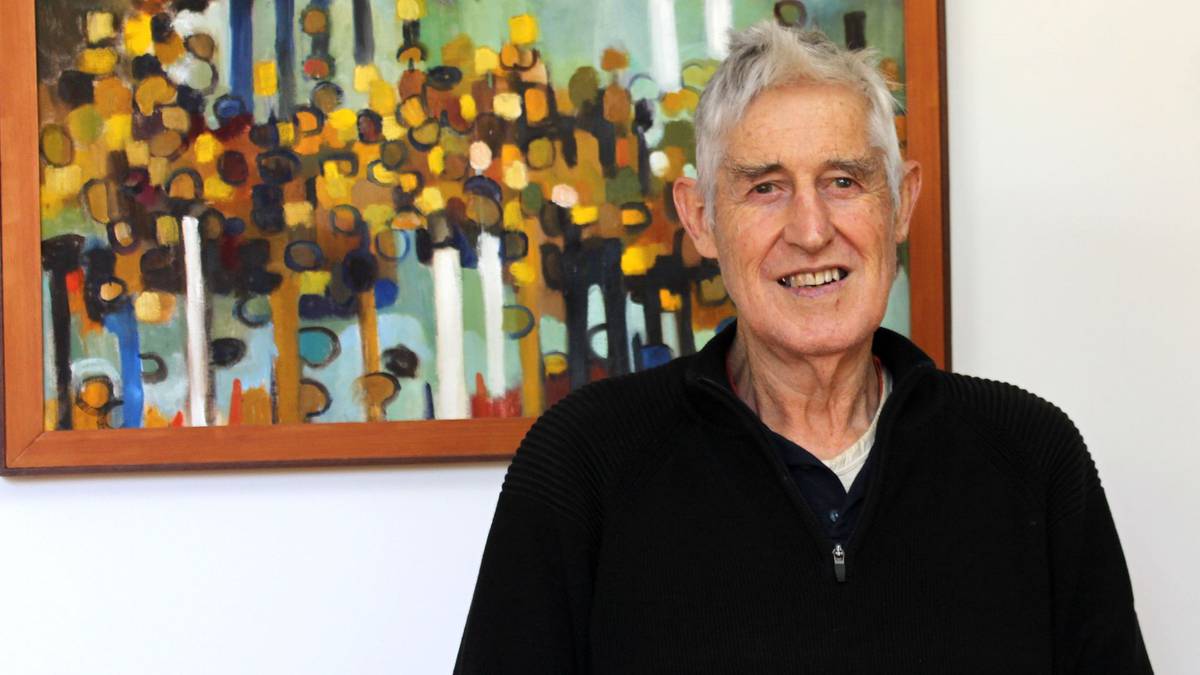 Palmerston North artist and poet John Christeller. Behind him is a painting by Yvonne Rust, a friend of his mother Flora. Photo / Judith Lacy

The pā paddock carried a blanket of thistles and a heavy pinch of sheep pallets.

These lines are part of John Christeller’s poem about Puketakauere Pa, the site of a battle in the 1860 New Zealand War.

The poem and artist from Palmerston North has written poems in English and te reo Māori about 18 sites of the New Zealand Wars and created a series of woodcuts reflecting his observations during his visits last year.

Shared stories was released in time for its exhibition at the Aratoi Wairarapa Museum of Art and History in Masterton.

Christeller hopes her work will spark conversations about the battle sites, which New Zealanders walk through every day often without knowledge or thought.

“I think that raises more questions than answers, which is what he’s supposed to do.”

Some of the sites were not easy to find and only two hours away he saw someone else.

The other two prints in the book are Te Uru Karaka in Palmerston North, where iwi was “jostling for space before the musket”, and Bastion Point in Auckland.

His journey to explore New Zealand Wars sites began about 20 years ago when he saw a woodblock print by Cherokee artist Kay WalkingStick at the Pātaka Art + Museum in Porirua.

WalkingStick’s monochrome print of a hill with a dry wind blowing grass represents the site of a battle where its people lost their land. It had a strong and lasting emotional effect on him.

It was only last year that Christeller thought he had time to depict New Zealand battle sites.

The 74-year-old man is in poor health.

Christeller is fluent in te reo Māori but aware that he is a Pākekā and not a historian. Christeller appears in some poems but not others.

“The title of my work refers to the different stories told by the protagonists of these battles. Both are true. Reconciliation means accepting this proposal.”

Engraving means making strong decisions about what will be printed and what spaces will be left open. He realized that if he wanted the natural color for every print, he would end up with a “boring” green exposure because grass and trees dominate the landscapes. Instead, he opted for a range of bright colors.

Christeller was a senior scientist at Plant & Food Research. His career as a plant and insect specialist took him to Japan, the United States and Europe.

He was born in Christchurch and grew up in Hawke’s Bay and Upper Hutt. His middle name is Tāne, which he says indicates a certain liberal view of his parents. His maternal grandfather, a shepherd, was fluent in te reo Māori.

The Dictionary of New Zealand Biography records Alley was named on the wish of his aunt, who had great admiration for Rewi Maniapoto, a Ngāti Maniapoto chief.

Christeller’s German-born father, Gerhart, was a baritone who returned to Europe several times to develop his singing career. He was also a lecturer in the German department at Victoria University of Wellington.

Christeller says he was exposed to art from birth. His mother Flora, née McDonald, was a potter. A fine arts graduate, she taught art at Te Aute College in Hawke’s Bay and Christeller remembers the ovens on their lawn.

The only course he took was a week-long woodcut course taken by Marion Webb about 20 years ago. He was a serigrapher, but after this course he fell in love with wood engraving.

The two engravers who influenced him the most are Kawarazaki Shodo and Shikō Munakata.

Next February, he will exhibit his prints at the National Army Museum.

Christeller is also a sculptor. One of his works is the Maori creation story, another depicts the whakapapa of his wife Donna.

A modest stone, a rotting fallen louse. No one wants to remember Te Ranga.