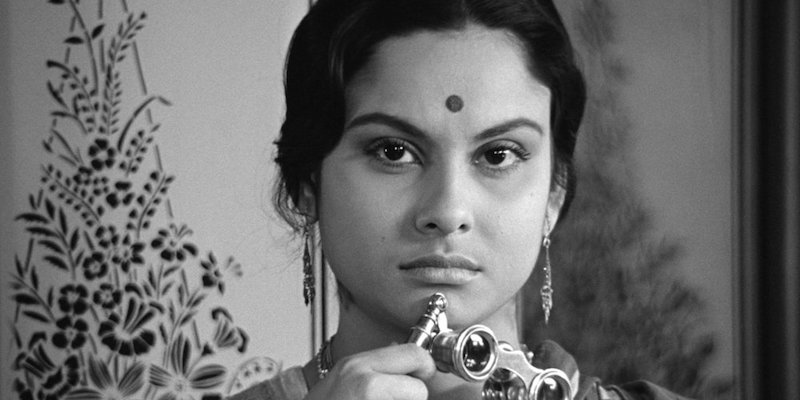 In a library in St. Louis in 1990, I watched our people – speaking our language, eating with their hands – on an American big screen for the first time, in Satyajit Ray’s iconic black-and-white film, Pather Panchali. This is the first film in his Apu trilogy, a bildungsroman of the life and tragedies of a young man named Apu. It was never a question of whether we as Bangladeshi Muslims saw ourselves in these Hindu figures living in rural West Bengal – they were our people too.

While books, the form I felt most drawn to, gave free rein to my imagination, I revered the emotional textures of this film. You cannot look away, neither from pain nor from joy. I cried when his sister, Durga, died of a fever after dancing in the monsoon rains. I cried in the next two films, when Apu lost his mother and his wife. The beauty of the trilogy imprinted on me as an artist, but also the realization that female joy is short-lived in Satyajit Ray’s films.

In 2021, I revisited Ray’s prolific work. The first standing: Charulata, the story of a young bhadramahila, a kind upper caste lady, is set in late 19th century Bengal. It felt so relevant to me as I was writing a book, locked in my house during quarantine, which made the fate of Charulata’s character extremely relevant. Stuck in the interior quarters of a sumptuous residence, the zenana, Charulata spends the time playing cards with her sister-in-law whom she cannot stand, embroidering slippers, devouring books and preparing tea for her husband, a man much older than her.

I kept wondering: where are my people in this movie about wealthy West Bengal Brahmins living on giant estates?

Too preoccupied with her diary and the rising freedom struggle against the British to give it sufficient attention, her husband arranges for his cousin, Amal the Poet, to come stay with them to keep her company. He is much closer to Charulata’s age. This is where the delicious trouble begins. Besides living for free in a mansion, the Poet’s task is to encourage him to write – even though Charulata is already a much better writer than him – and with each passing day his repressed sexuality is awakened.

In one of the film’s most hypnotic moments, Charulata is swinging on a swing, breathing hard, staring up at the sky, mad – as if angry – with desire. From the camera angle, Ray makes sure we are close to his face, his breath, the sway; we feel how much she wants to be fucked by this young man, how much she hates herself for this unshakeable desire. With no way to expel their desire, the sweet and simple foreplay between her and the poet is a song, one I recognized immediately. “Phule Phule Dhole Dhole” – “Flowers sway in the breeze”.

It was the first Bengali song I learned from my father. I remember Baj in his swim shorts, taking my sister and I from baths to showers. I had no idea then that this song belonged to this movie; when i sang it, i felt like i was in my own world, unaware and unafraid of midwestern neighbors who hated our religion, our brown skin beaded and wrinkled from falling water, our music , crystalline, bouncing off the walls.

Charulata writes a brilliant article about her village for a newspaper the poet is too afraid to run, and he realizes she is out of his league. When she falls into his arms crying: “I will never write anything again! he also realizes that she is in love with him. Her tears flow, from the confusion, from the guilt of having written it into oblivion, of knowing that she will never have it. Maybe the poet is in love with her too. But he could never love her back, he would lose everything. And so, he leaves her, in the middle of the night.

(O, husband is hotter than Amal, a fuccboi, but who can resist a poet?)

Charulata is based on a short story, The broken nest, written in 1901, by the first Indian Bengali winner of the Nobel Prize for Literature, Rabindranath Tagore, who also wrote the lyrics to his song. Some say the poet’s closeness to Charulata reflected Tagore’s actual relationship with his sister-in-law Kadambari Devi. She was the ten-year-old wife-child of his older brother. During her husband’s long absences from home, her bond with young Rabi, her peer, grew stronger. Did the two steal time away from home? Or maybe, one rare afternoon, when they had the house to themselves, did they ever know their forbidden love? When it came time for Rabindranath to marry, he too chose to marry a 10-year-old child, Mrinalini, whose father worked on his family’s estate.

What does it mean to be a diaspora, stripped of the unreasonable project of universality, and instead to engage intensely in decolonization and the decentering of hegemony, while sparkling with sensuality and rage?

Four months later, Kadambari Devi overdosed on opium. Was death easier to face than losing the love of her life that she would never have?

A moment comes and goes in the film, almost imperceptible:

One afternoon, Charulata discusses with the Poet of all the beautiful women of the books of his favorite author. She puckers her lips when she names one of them, Lutfunessa – Arabic for “women’s grace” – and describes her as plain, dark-skinned, thin-lipped, not as pretty as the others. (Its problematic favorite author is Bankim Chandra Chatterjee, novelist and composer of “Vande Mataram”, a passionate song of the Swadeshi movement to liberate India. To this day, the tune endures as a Hindu nationalist anthem that represents right-wing, fascist factions from India.)

Bankim represented the essence of Bengali bhadralok, the people of Charulata and the economic class of the poet. He dreamed of a Hindu rashtra, India as a Hindu homeland, free from British rule. His writing, praised for its lyricism, cracked with disdain for Muslims. His words were powerful enough to influence the first Partition of Bengal, a foreshadowing of the final and terribly violent Partition of India in 1947, which would divide South Asia into India and Pakistan. It makes sense that a woman of Charulata’s class and caste would read Bankim’s work. Despite my relationship with her character, a young writer caught like a bird in a cage between the wife and the sexual desire that escapes in the books, I kept asking myself: where are my people in this film about wealthy West Bengal Brahmins living in giant estates?

Lutfunessa, the dark-skinned, unbeautiful figure in Bankim’s work, is the only Muslim woman, a ghost in this artwork. This Muslim woman could be from East Bengal, which would become East Pakistan and eventually Bangladesh. This woman had the same name as my grandfather, my paternal grandmother. Lutfunessa. Our ancestral stories remain locked in a spectral zenana, lost in the inner chambers of upper-caste bhadralok consciousness. From their perspective, you would never know that Muslim women were writers or dreamers, because their loves, heartbreaks, and sexual desires never made the final cut.

And so, I wonder, what happened to Charulata?

After her husband sees her crying wildly for the poet, he drives around aimlessly in a car, distraught. He goes home and Charulata reaches out her hand. “Esho,” she said. (“Come.”) Satyajit Ray’s use of still photographs depicts the last moments we see Charulata and her husband. reach the other. Together. Looking away, a dead end. The possibility of a future. Did Charulata’s marriage ever become bearable, even joyful? Have she and her husband started their magazine together yet? Did they have a child? Has she become a young widow? Did she commit suicide?

After the screening of Ray’s film, another decade passed before I read Bangladeshi characters in English (albeit British) in Zadie Smith’s film. White teeth. Fiction of non-black, non-indigenous people of color is often centered on the immigrant narrative, and within the South Asian diaspora, the dominant culture of Indians, upper castes, and Hindus is the story centered again and again. . And in modern film and television, where there’s undeniably more representation of South Asians than when I was growing up, those stories are still centered around the experiences of Indians and Native Americans. South Asians from Bangladesh, Pakistan, Sri Lanka, Nepal or Bhutan are rarely part of the narrative; we are invisible indians.

What does writing on the edges mean? What does it mean to be a diaspora, stripped of the unreasonable project of universality, and instead to engage intensely in decolonization and the decentering of hegemony, while sparkling with sensuality and rage?

I am the child of Bangladeshi immigrants who arrived less than a decade after the 1971 war of liberation, a final partition of East and West Pakistan. I am their eldest daughter, raised in the South and Midwest before we finally settled in New York. But I am writing about an experience that is not theirs, an experience that is still emerging in the American consciousness.

In the United States, the voices, art, and lives of Muslims celebrated by the mainstream cultural imagination are often needed to stifle or diminish their overt Islamicness. We are being asked to deny our historical and lived relationship to imperialism, violence and erasure, especially after 9/11. I know the shame of hiding the truest parts of me – during the Gulf War, my parents warned me never to tell strangers our last name, Islam – those parts that complicate an American identity d Asian or South-Asian origin: I am a Muslim. I am Bangladeshi. I’m American.

As I am a non-Indian Bangladeshi Muslim, the pain of my browning is not just that I am invisible to whites or blacks; it is that my people, the Muslims, are considered difficult, dangerous, dissident, all over the world. Not just by white people, but by our own South Asian relatives. Writing the narratives of women and Muslim women is not just about representation. Writing challenges the silence of our truths, avoids any flattening. We are not oppressed, silent and broken by violence. Writing ourselves in our fullness and our complexity gives us a future. Our forefathers – Lutfunessa – were never imagined as part of history, even though their stories are older than any nation.