“On the islands of exile and poetry” 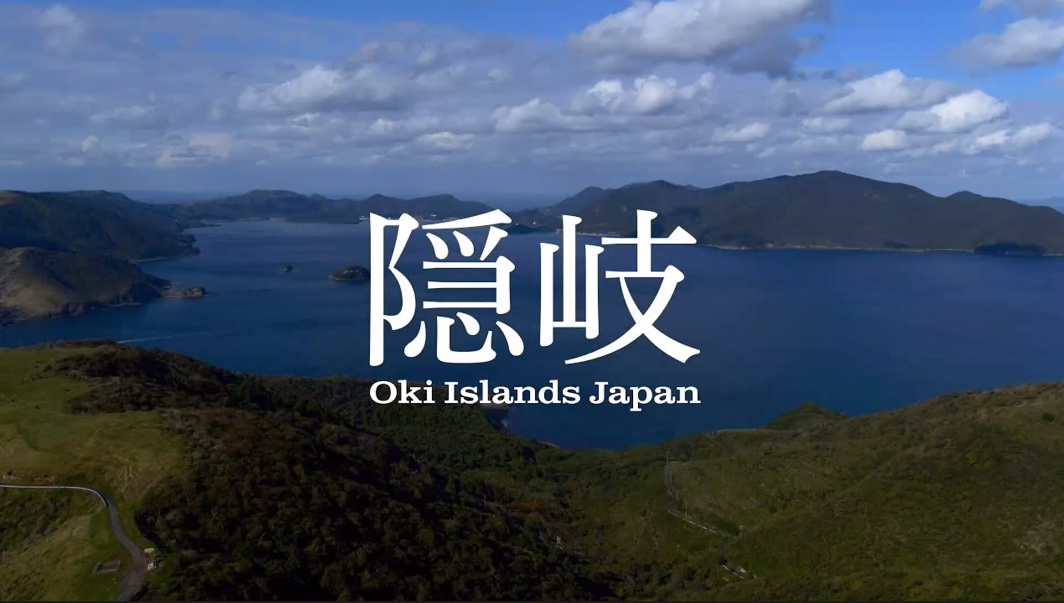 An overview of the Oki Islands is presented at the start of the webinar.

There is something alluring about remote islands, especially if they are known to be places of exile for historical figures.

When prolific Japan-based journalists Kit Nagamura and Alice Gordenker recently offered their readers the chance to take part in a free webinar on the Oki Islands, I knew I couldn’t pass it up. 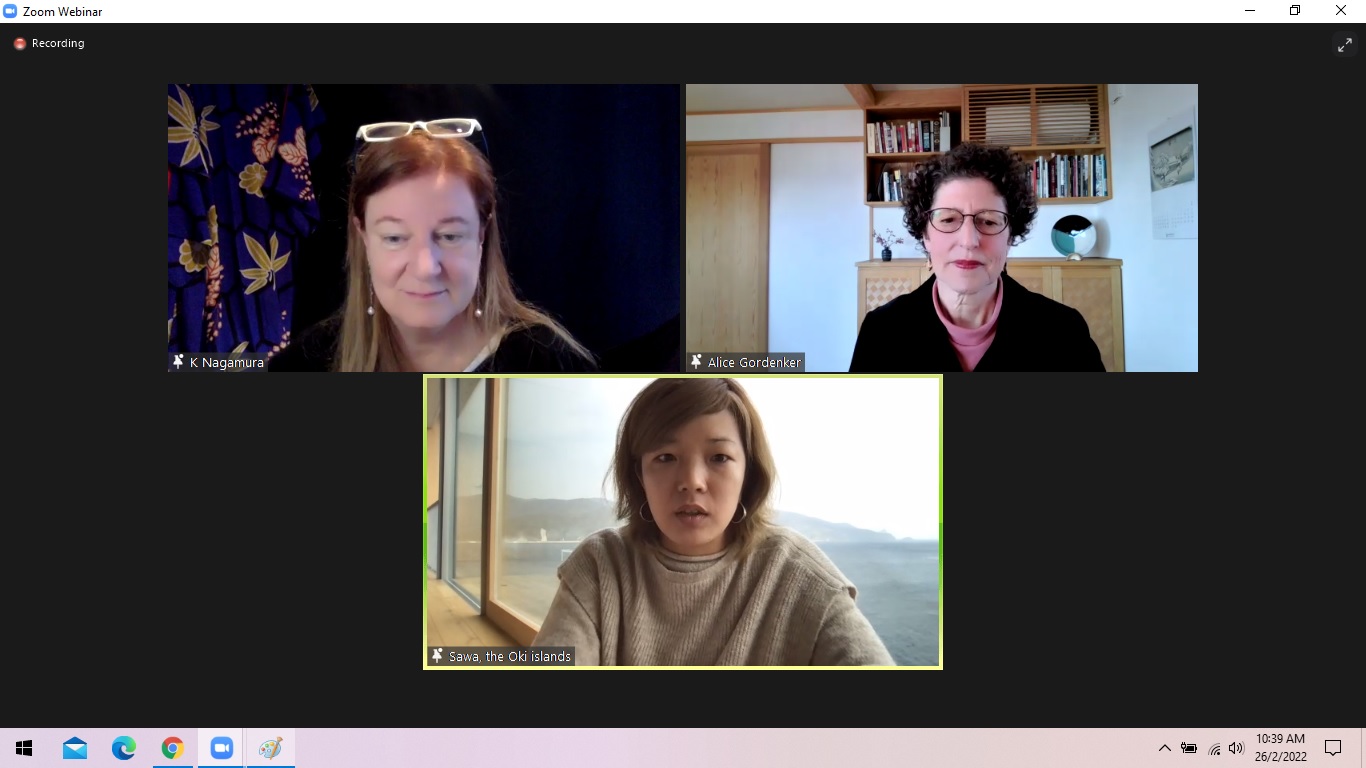 Sawako (bottom screen) introduces Gordenker (top right) and Nagamura at the start of the online session.

Titled “The Poetic Islands of Japan: Emperor Go-Toba, Waka Poetry and the Oki Islands,” the hour-long session was a virtual tour of said islands, associated with an emperor in exile and the development of poetry.” waka”.

The Oki Islands are located in the Sea of ​​Japan, off Shimane Prefecture in western Japan. I first became interested in it six years ago when I was in Osaka. It was when a friend, Ryou, brought me for an impromptu visit to Minase Jingu Shrine, established in 1240 to commemorate the death of Emperor Go-Toba (1180-1239).

Ryou, who is a poetry enthusiast, explained how the 82nd Japanese emperor began his poetic quest after he abdicated at the age of 18. This quest continued even after his exile to the remote islands of Oki at the age of 40.

I thought Go-Toba was an interesting character, but what interested me more was his place of exile. I was told that despite the remoteness of the ancient capital of Heian-kyo (present-day Kyoto), the islands had abundant resources that made living conditions reasonably comfortable.

Many aristocrats and fallen emperors, including Go-Toba, were sent there.

With this fascination still strong after all these years, I signed up for the webinar.

The session started with an introduction of the two speakers by the host Sawako, who works for the Oki Unesco Global Geopark.

As the first speaker, Gordenker gave a general overview of the islands. She explained their geographical location and also their composition of some 180 islands. 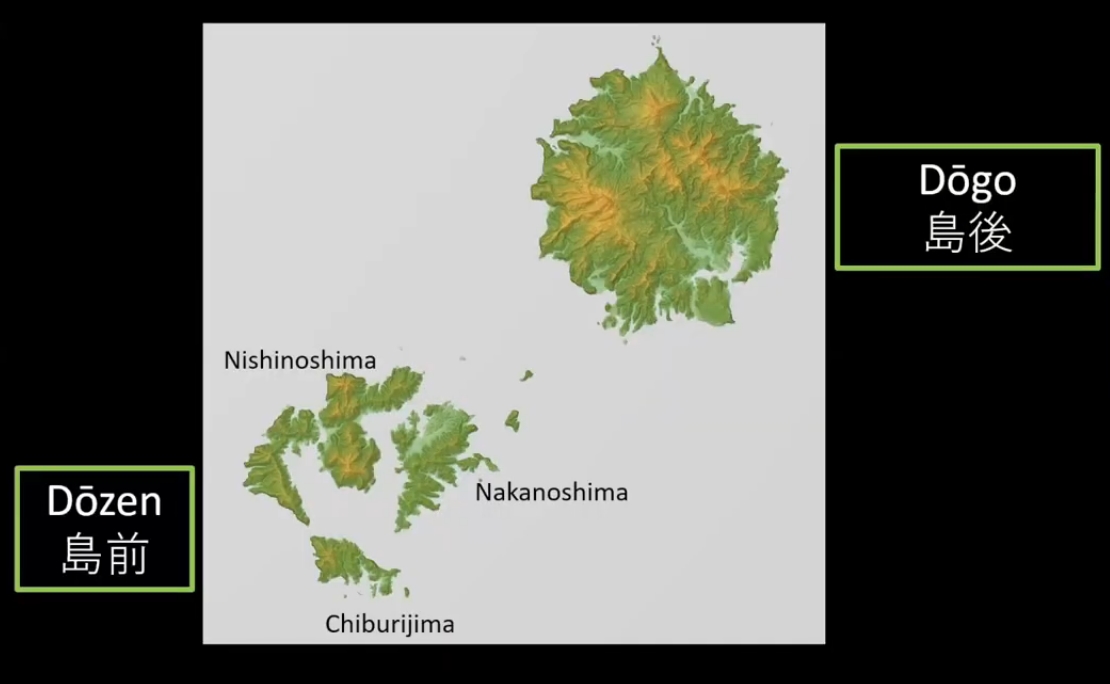 The photo shows a map of the Oki Islands, which consist of four main islands.

Only four are inhabited, namely Dogo Island (Okinoshima) and the Dozen Islands (Nakanoshima, Nishinoshima and Chiburijima).

Around 800 years ago, Go-Toba landed in Nakanoshima where he was to spend his final 19 years in Ama Town.

Today, the islands are accessible through an airport located on Okinoshima. It is directly connected to Itami Airport in Osaka and Izumo Airport in Shimane. Another way to reach the islands is to take a ferry from the mainland, which would take two to three hours one way. There are also inter-island ferries.

Gordenker also mentioned that the islands were located along the historic Kitamae-bune trade route, linking Osaka and the northern port of Hakodate during the Edo period.

She then gave an illustrated presentation of the attractions of the islands. Thanks to their geological heritage and their geographical isolation, the islands present breathtaking landscapes, unique fauna and flora, as well as distinct customs. 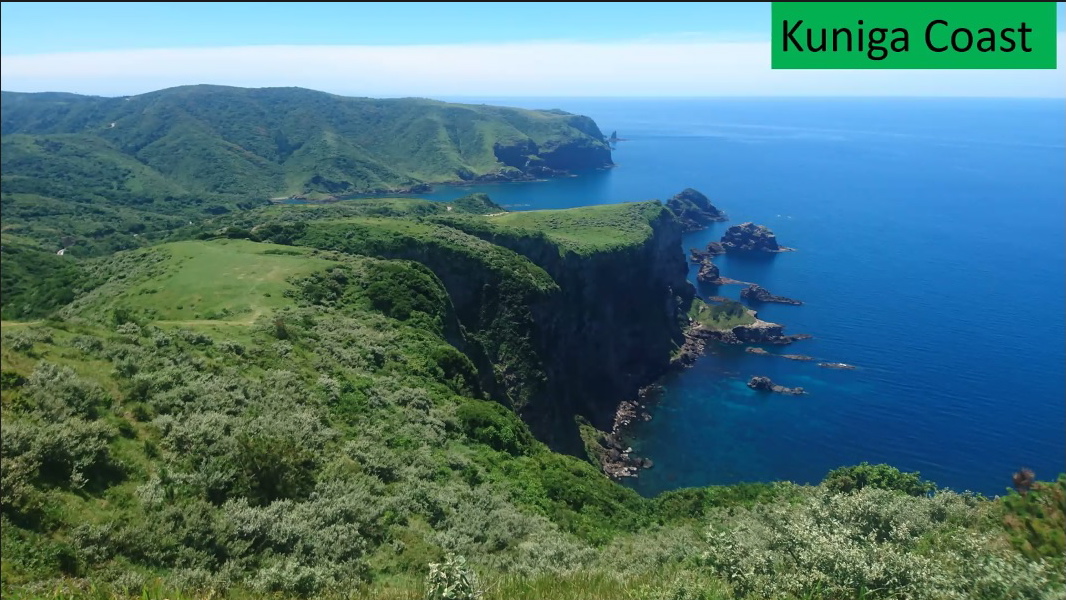 This image is one of many landscape photos of the islands shared by Gordenker during the virtual session.

Next comes the Nagamura session. The award-winning ‘haiku’ poet began by talking about ‘waka’ poetry, which she considered ‘a difficult subject’.

“If you ask the average Japanese on the street what ‘waka’ is, they’ll shrug their shoulders and probably try to walk away from you.

“It’s partly because the word has two meanings. ‘Waka’ is a term that covers all Japanese poetry, but it’s also a specific form,” she said.

‘Waka’ and its meaning

To differentiate between ‘on’ and syllables, Nagamura gave the example of the word ‘hike’, which is used in both English and Japanese. In English, “hi-king” is made up of two syllables. In Japanese, it is read as “ha-i-ki-n-gu”, consisting of five distinctive sounds.

“For this reason, most modern translations of ‘waka’ do not attempt to imitate the 5-7-5-7-7 format, as this would result in poems requiring foreign words to fill in the syllable count “, she said.

Nagamura added that “waka” would often contain references to past poetic works, be rhymeless, and use “kakekotoba” – words with several different meanings.

“While ‘haiku’ is about restraint and keeping you away from the poem, ‘waka’ is passionate, expressive and confessional,” she pointed out.

She said that during the Go-Toba era, poetry had become an important part of the lives of officials and public figures.

“The ‘waka’ was written to celebrate births, to mourn deaths or lost loves, to announce important events, or to initiate or break relationships. Learning, intelligence, human qualities and sense of observation were highlighted.

“Emperors were naturally expected to excel in ‘waka’,” she said.

Go-Toba was known as an excellent poet, sponsoring numerous poetry contests soon after retiring as a ruler.

Nagamura shares the translation of a Go-Toba lament.

He also edited a new ‘waka’ anthology, which would later be known as ‘Shin-Kokin Wakashu’ (New Collection of Old and New Poetry) – a title intended to update the previous anthology. In collecting ‘waka’ for this work, he worked with some of the best poets of his time, including Fujiwara Teika.

Nagamura observed that what turned Go-Toba’s perfect life upside down was his attempt to regain power from the Kamakura Shogunate.

“He wanted to restore imperial rule in Kyoto by force. His plan was discovered by the shogunate and he was exiled to Nakanoshima for life.

“It might be difficult for us to grasp the shock that exile must have been in Go-Toba. He would lose his beloved social circles, the familiar bustle of court life, the regular encounters with his fellow poets.

“It’s almost unfathomable. A lesser man could have perished from it,” she said.

“All is not lost”

While crossing the stormy ocean towards Nakanoshima in 1221, Go-Toba composed a ‘waka’, which reads: ‘I must be / the new guardian of this island! / On the seas around Oki / O wild winds / Blow carefully!’

Gordenker shares a photo of Oki Shrine in Ama City.

I thought that sounded prophetic because in 1939 Oki Shrine was built in Nakanoshima to honor his talent. There he is dedicated as the deity of ‘waka’, making him an eternal guardian of the island.

While in exile, Go-Toba was hosted by the Murakami family. Their home is now a public museum. Nagamura shared a photo of an exhibit that caught his eye, which was a “kemari” leather ball. 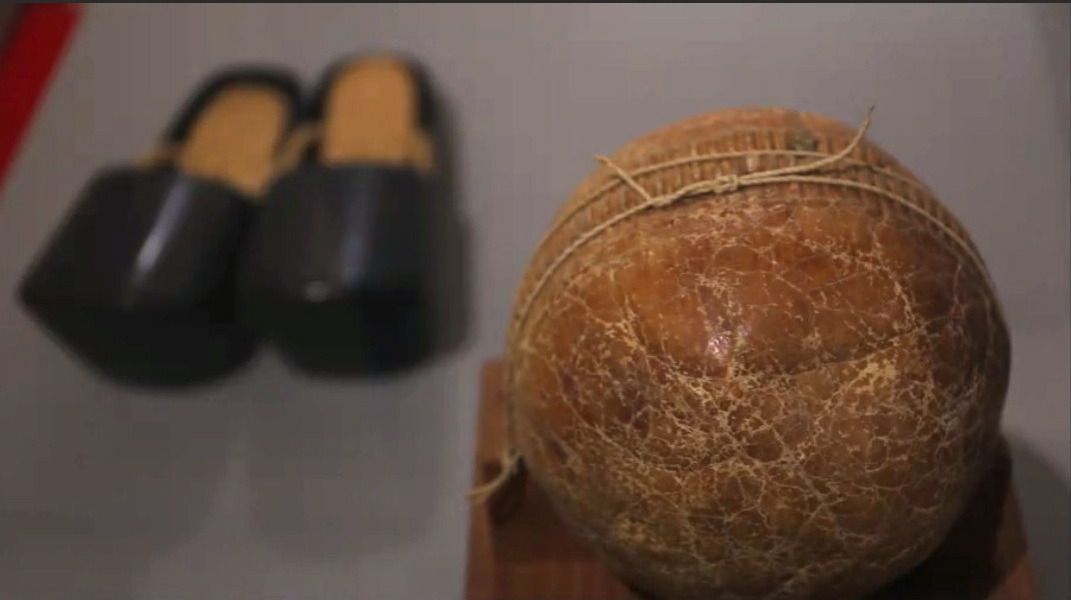 Nagamura displays this photo of the ‘kemari’ ball on display at the Murakami Family Museum, during his presentation in the webinar.

“Kemari was a popular game among courtiers. Go-Toba was very fond of this sport and he probably brought it with him to the island. It is the most tangible element, apart from his last will, his swords and his “waka”, which connects us to Go-Toba, the man.

“I cling to this image as proof that he did not completely lose heart or give up his sense of pleasure in life. I mention this because most of his poems on the island were lamentations,” a she declared.

Nagamura noted that while most of Go-Toba’s “waka” works were reminiscences, laments, and woes, there were also those that reflected his observations of local people and customs.

“The works of the islanders caught his eye. Between his self-pity poems, he watched locals picking herbs and tending the fields, bulls frolicking in the fields, fishermen at sea.

“These are the things you can still see today,” she said. 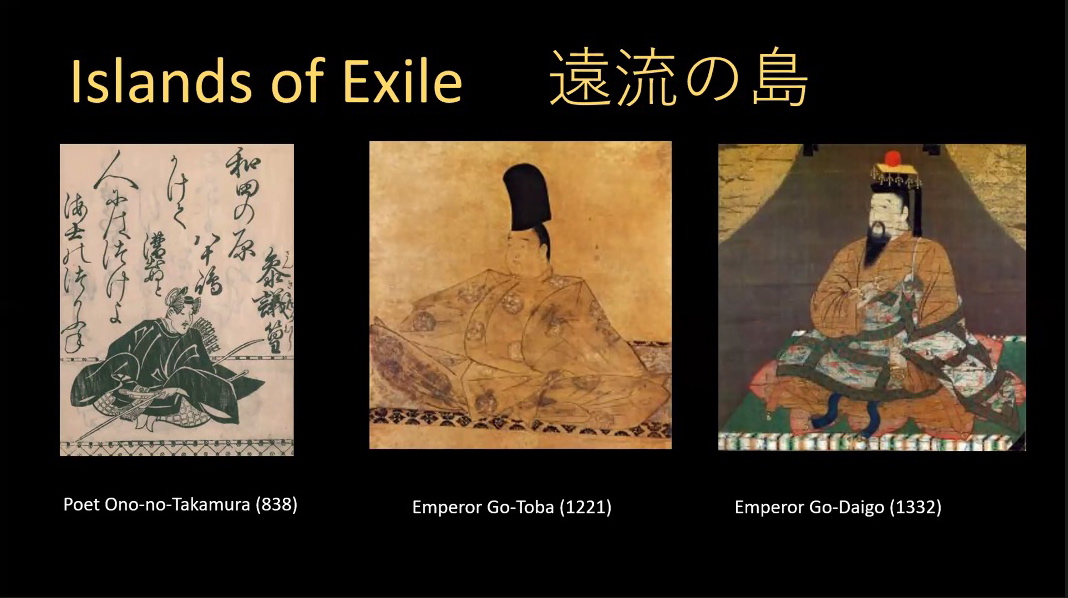 It is said that the Oki Islands were a place of exile for important personalities.

Go-Toba wrote around 700 “waka” while in exile. The most important collection was the “Ento On-hyakushu” (One Hundred Poems from a Distant Island). Some of his works are on display at the Go-Toba Museum in Ama Town.

While it’s on my bucket list to visit the Oki Islands, I haven’t found the right time for a trip. With international travel still on hold, virtual tours like this are a godsend. I look forward to the day when I can travel safely again, as I intend to trace the fascinating journey of this poet-emperor to the distant islands.