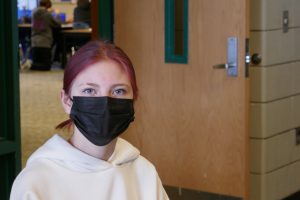 These are some of the 45 visions of ninth-graders at Liberty Bell High School, who described their dreams for America in heartfelt, personal, and often humorous poems.

The poems were the culmination of a unity about a sense of justice and how it could be improved in their life, school, community and country, said Liberty Bell English teacher Dani Golden.

The unit included readings, presentations and panel discussions hosted by local activist Darcy Ottey. As part of a Methow Arts teaching residency, poet Cindy Williams Guttiérez worked with the students on their writing.

During the unit, students examined the American Dream from different perspectives, including the Founding Fathers; Chief Joseph; Martin Luther King Jr.; and DACA dreamers – young people brought to the United States by their families from another country, but who do not have legal status here.

The students explored the advantages and obstacles each group faced and compared those experiences with their own dreams, Williams Guttiérez said. “It’s all about empathy – they realize their own experience isn’t the only experience,” she said.

For their latest poetry project, the classes studied “Let America Be America Again” by Langston Hughes and used the poem and its meter as inspiration. Hughes’ poem expresses the tension between the American dream and his experience as a black man in early 20th century America. Many students explored unfulfilled dreams in their poems, but others focused on values ​​they encounter in their daily lives.

Williams Guttiérez worked individually with each student to help them translate their abstract dream into something that could be felt by the senses.

“It was such an exciting transition – you could see the light bulb go on,” as they went from something abstract to a concrete image that you could see, smell or taste, Williams Guttiérez said. “It deepens the power of the poem.”

Golden helped students incorporate symbolism and imagery through linguistic devices such as rhyme, alliteration or assonance, vowel repetition. She encouraged students to draw on their own experiences – playing hockey, having younger siblings – to find relevant examples of abstract concepts like fairness and dignity.

Students could write about whatever they wanted. “There is great diversity in the poems. Some found fault with America; some have found things that make them proud,” Golden said. “I really try to celebrate each student to make it personal and meaningful.”

Williams Guttiérez wanted students to have a vehicle to express their ideas in their own way. “I consider teaching poetry to be a subversive act,” she said. “It instills confidence in each student’s singular voice – it’s not my voice.”

“A poem is meant to be like a river – it starts in one place and ends somewhere else. There has to be a bend somewhere,” she said.

Some students reflected on issues of discrimination, poverty, body image or addiction. Others wrote about a positive view of America, such as natural beauty or a sense of contentment.

In “Let America Change for Once,” Sage Schrager wrote about seeing everyone as equal, regardless of skin color or who they love. Writing about a subject with such personal meaning was easier than addressing a subject she feels detached from, Schrager said. “The idea came to me right away. It resonates because it’s something I want to change,” she said.

Schrager used the image of a puppet to describe how people trumpet their views on social media for fame and attention, but not because they really care.

Raiff Reichert pondered examples of a carefree America and found many concrete examples. Reichert envisioned a life where “people’s happiness / is crowned and not their status, or their possessions, or their wealth, or their beliefs and religions, but simply / their enjoyment of life”.

Clover Thrasher enjoys reading and writing poetry. In “The Land of The Caged”, she used imagery and metaphors to convey kindness and joy, such as “May America be surrounded by smiles, puckering our cheeks again”.

Lucien Paz began his poem “Let America Be Open Minded” with a quote from Martin Luther King that inspired him for years. “Let America be a place where a fist in the air means power for all. Not just black or white power,” Paz wrote.

Kaden Borowski used pacing and carefully thought out line breaks so that the footage unfolded slowly, encouraging people to stop and think. In “Let America Be Peaceful Again”, Borowski wrote “O, may my land be a land where the viruses disappear / Like trees in a flood with no place to take root”.

Pippa Smith considered writing about equality and fairness but, sitting inside and looking out the window, she came up with “Let America Be Outdoors Again”. Much of the poem flowed naturally, Smith said. The first image that came to him was “Let it be fields of flower-speckled grass nestled in the forest floors.” Then the rhymes suggested themselves, with “Let’s seek a new adventure in this world right outside our doors,” she said.

The outdoors contains its own element of social justice, since people who live in poverty typically have less access to the outdoors, Smith said.

The young poets had several opportunities to share their writing. Some joined other local poets and read their poems at William Stafford’s sixth annual birthday reading hosted by Williams Guttiérez earlier this month, which celebrated the lifelong poet and pacifist.

All students participated in two virtual readings for parents, families and invited members of the community. Methow Arts will publish the poems on its website and plans to publish a printed book of the poems in the future.

The students received “massive rewards” from the public when reading poetry, Golden said. The students’ vision of justice was so powerful that many people suggested sending their poems to members of Congress or President Biden, she said.