Lalla-Roukh shows the Wexford Festival at its inventive best 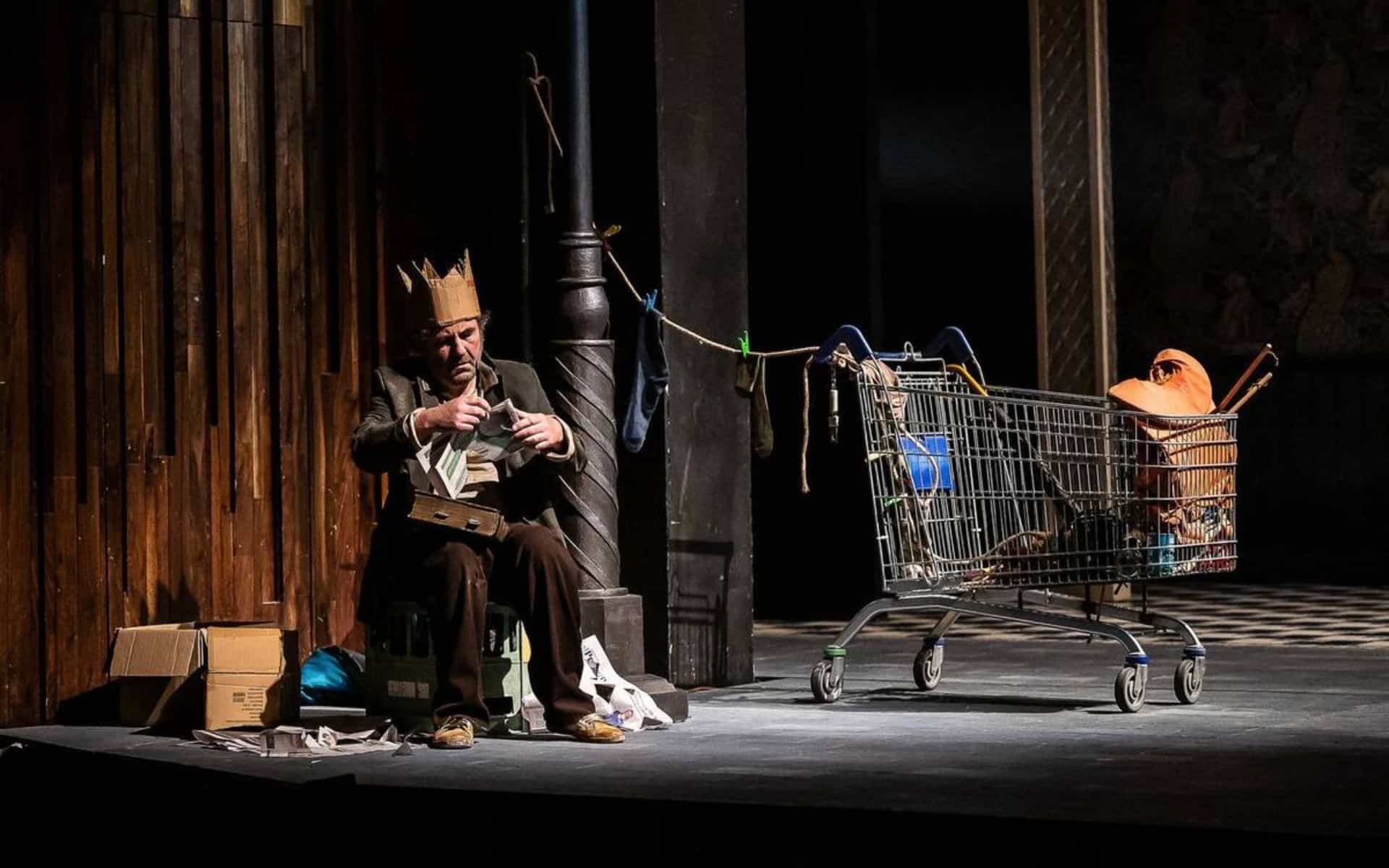 At the end of the opera, the tramp, leaning on his laden shopping cart, slowly crossed the stage past the bowing actors, fixing the audience with a withered and disdainful gaze. Shaking his head knowingly, he left the stage to the right.

Only to reappear, cartless, from the backstage to acknowledge his rightful fame online with his fellow performers. Legit, as he had been the unusual narrator who brought the fairy tale opera, Lalla Roukhto life at the O’Reilly Theater in Wexford’s national opera.

As an observer, he delivered running commentary from the sidelines or as he strolled among the cast, explaining the plot and kicking the action into a satisfying pace.

Orpha Phelan, the director of Félicien David’s comic opera in 1862, maestra of “oomph”, affirms that when he was entrusted with the task of staging the exotic oriental work in 2022 Wexford, she was visited by “the mother of invention”. Mother invented the narrator device and provided various other strokes of genius.

Phelan was born in Kilkenny. Now she is based in London. With nineteen directorial positions ticked off to her credit, a theme emerges. There is a taste for difficult operas. by Benjamin Britton Billy BouddJonathan Harvey’s Wagnerian dreamby Michael Rev. Gordon Raising Icarus are just three examples from his Rolodex. Each has been well reviewed. All are difficult.

Rosetta Cucchi, director of the Wexford Festival, chose a magic and music theme for 2022. The choice of Lalla Roukh as one of the three fully staged operas was inspired, as the work is based on a poem of almost the same name – Lalla Rook, (could a more informed reader let me know why the spelling was changed?) – by the famous 18e/19e century Dublin poet Thomas Moore.


Every Saturday:
Read the week’s most read articles on politics, business and geopolitics
Receive exclusive offers and invitations
Plus uplifting cultural commentary

Moore was eclectic. Writer of poems, political “squibs” and lyricist. He wrote the words for The last rose of summer and The minstrel boy. He is also credited with having lost the memories of his friend, Lord Byron. Which could be just as well.

Moore has a close connection to Wexford. There is his mother. Then there’s the Thomas Moore Tavern, a Cornmarket favourite. Me and my ever-growing band of opera pirates have been loyal customers for 45 years. Oddly enough, the operas seem more interesting after a visit.

The opening scene of Lalla Roukh was a total surprise, a cafe storefront – O’Rourke’s Emporium. Rourke – Rukh. Geddit? Coffee is distinguished, early 20’se century perhaps, and is gradually filling up with customers. Meanwhile, our bum/narrator plunges into a very 21st wheelie bin of the century and discovers an abandoned book. He begins to read aloud.

I intentionally didn’t read a synopsis or any of the program’s background notes. I find the white sheet approach to be a good test for an unknown production. If an opera is incomprehensible as the action unfolds, requiring a pre-brief, I think the director has failed.

As our tramp/narrator began his reading, the lights inside the empire went out and the oriental characters from Moore’s poem appeared, replacing the well-dressed coffee-drinking clientele.

With a well-delivered story, we had flown over a street scene straight from Dubliners to Persia. Lorcan Cranitch, a well-known Irish actor – TV series such as Cracker, and The Royal Shakespeare Company – took us there. His bum was cynical, intellectually inquisitive, and delivered running commentary on the action that cut swathes of boring recitatives and was hilarious at times.

The plot is simple and follows a well-trodden path of oriental intrigue. Lalla Roukh, daughter of Mughal Emperor Aurangzeb, was promised in marriage to the King of Bukhara. The king sent a courtier, Baskir, to accompany the princess and ensure safe passage.

On the way to Delhi, Mirza, the servant of Lalla Roukh, is complicit in having encouraged a mysterious minstrel to woo his mistress. What could go wrong?

The princess is so seduced by the minstrel that when she arrives at the palace of the king of Bukhara, she decides to return to Delhi and find her new love.

Baskir threatens the minstrel, blackmailing him into giving up Lalla Roukh in exchange for her life. The minstrel appears to agree to Baskir’s terms. Lalla Roukh, learning of the pact, tells Baskir that she will renounce her engagement anyway in front of the whole court.

The comic courtier’s goose is well and truly plucked, stuffed, tied and put in the oven at Regulo 7. Cooked!

The king, in all his finery, emerged and turned out to be – yes, the minstrel. He had wanted to find out if Lalla Roukh loved him for his own merit rather than for his wealth. Perfect ending. Man of the world, the tramp seemed to have a contrary opinion. Lalla should have timed it.

Steven White conducted the formidable Festival Orchestra. He perfectly captured the lyricism of David’s music. Wexford, famous for its revivals, mined gold in the now overlooked David. In the middle of the 19e century, he was popular and respected by his contemporaries. His work doesn’t deserve to sit dusty in the closet.

Christopher Columbus, The Pearl of Brazil, Herculaneum. Just three of his operas that would deserve a look from Wexford.

The voices were fabulous. Gabrielle Philiponet, a French lyric soprano, sang Lalla-Roukh. David’s music was a range test. Philiponet was spotless. And, headstrong and childish enough to be a convincing tomboy, but never overdone.

Her minstrel lover, Nourreddin, was Pablo Bemsch, a very experienced Argentinian tenor with a beautifully fluid voice, but a rather vaporous presence. He lacked the authority of royalty. Or, for that matter, the minstrel.

Baskir, traditionally played as Lalla-Roukh’s confidant, was a self-deceiving comedian. Ben McAteer, a Northern Irish baritone with a flair for Gilbert and Sullivan, was perfect in his Charlie Chaplinesque portrayal of the staged caretaker.

The opera sparkled with visual tricks. A platoon of blue soldiers desperately trying to hold Lalla-Roukh down followed a complex pattern in mechanical unison but hilariously crumbled into a neat line when nudged with his finger. There was a scam of the internationally renowned Irish troupe Riverdance in a mock ballet sequence.

Madeleine Boyd designed the set and costumes. Over the top seems to be Boyd’s credo. Why the chorus featured a bull, I wasn’t sure. When he appeared in a backstage room overlooking the narrow main street as I returned from the performance, I knocked on the window to give him a thumbs up. He lowered his horns in appreciation.

This was Wexford at its inventive best. A work inspired by an Irish poet, which swept away everything before it when a version by the composer Charles Edward Horn was first performed at the Theater Royal in Dublin in 1818 and provided an opportunity to create contemporary comic comedy. Time for a revival.

Lalla Roukh took top honors at this year’s festival. The other two main operas, that of Dvorák Armida and Halevy Storm were good enough, but beaten to the post by Moore’s reluctant wife.

For more on them, the burgeoning magical little operas and surprising pop-up events that made this year’s Wexford a triumphant bounce back from Covid blues, anon.

The Arts Council announced on Friday it was slashing English National Opera’s (ENO) £12million grant, forcing the company, whose home is London’s Coliseum, to close its doors or to move.

Manchester was suggested. A £17m transition fund has been put on hold to encourage the business to roll smoothly.

The decision was heavily dragged in a recent Spectator article by Rupert Christiansen. Christiansen asked exactly what the Arts Council delivered in its bombshell – cutting support, forcing relocation out of London and revamping the repertoire. Either Christiansen has the gift of second sight or he benefited from a well-directed escape.

The immediate question is, can ENO close the £12m black hole? Everyone seems to be filling black holes these days, so hopefully they have the guts to fight and give it a shot.

£12m is around 40% of ENO’s current budget, so it would be a daunting task, but with the Colosseum asset under company control, there is room for imaginative thinking. Let the battle begin.