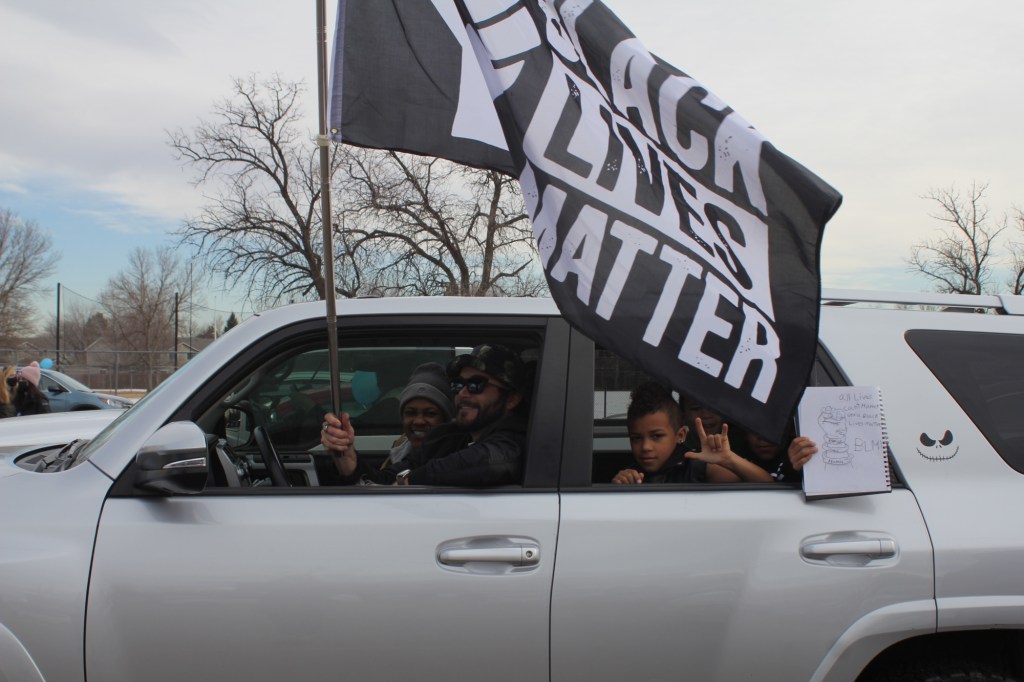 As the cars pulled into the Centaurus High School parking lot, music from the band Fruta Brutal greeted guests with a bilingual mix of English and Spanish indie rock music. The Boulder-based group was among the first of a long list of speakers and performers at Lafayette’s 17th annual Martin Luther King Jr. event, which was planned by the Lafayette Youth Advisory Committee.

Much like a drive-in movie, the event was broadcast in English and Spanish via FM radio, so attendees could listen to the program from the shelter of their cars, making the event feel warmly nostalgic, somewhat unconventional and extremely COVID safe – guests wishing to venture outside of their cars were required to wear a mask. Instead of applauding after a speech or performance, guests were encouraged to honk their car horns.

By 1:45 p.m., about 75 cars had filled the parking lot, some sporting messages of support written in window paint honoring King, while others were decorated with banners and flags. All marched from the Flatirons Community Church in a campaign for justice.

Lafayette Youth Advisory Committee co-chairs and Centaurus High School students Andrea Lastiri-Montiel, Josie Briggs and Amy Resendiz-Salazar introduced the program, while invoking King’s legacy and addressing the intentional use of the word “event” instead of “celebration” when describing the program.

“We, alongside the King family, recognize that we cannot celebrate until Dr. King’s vision is actualized,” Briggs said.

Newly elected Lafayette Mayor JD Mangat expressed his gratitude to all who attended, while identifying the theme for this year’s MLK event as “the right to vote.”

The rest of the afternoon included performances by local singers, artists and activists.