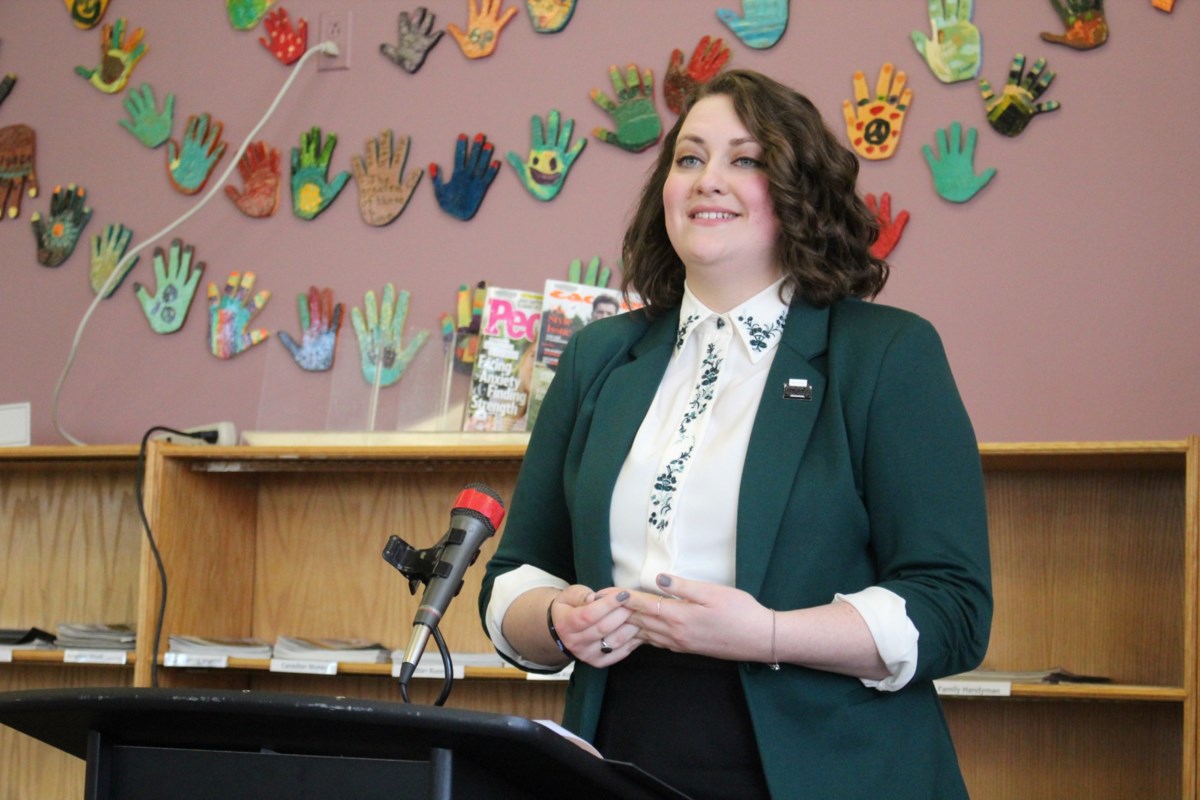 The fluently bilingual poet said she wanted to encourage other young people to “write and love poetry as much as I do”.

“It’s pretty amazing to be chosen as the youngest Poet Laureate,” Heyming said, speaking to Sudbury.com on April 29 at a press conference where it was revealed that she is the seventh Greater Sudbury Poet Laureate.

“I hope that in itself will open up the role to a whole new age demographic and also encourage young people to get involved and not have to wait, and write and love poetry as much as I do.”

Greater Sudbury’s first Poet Laureate Roger Nash, who introduced Heyming at the press conference, joked that he was the city’s oldest former Poet Laureate, while Heyming is young enough to be his granddaughter.

“So you see how inclusive we are,” he said.

Heyming said when she found out she had been selected for the role, she was in the car with her mother.

“I had to pull her over so we could have a nice little panic session together,” Heyming said, adding that she was “thrilled” to be selected.

Although young, Heyming – who will receive a $1,000 honorarium for her two-year tenure as Poet Laureate – is already accomplished in her craft. The Onaping resident’s poetry and non-fiction have appeared in a number of art and literature journals.

She is the author of “For Those I Loved”, her first book of poetry published by HARP Publishing: The People’s Press, and her poem “Poet” has been featured in the League of Canadian Poets’ “Poetry Pause”. .

“To me, poetry has always been more than just words,” Heyming said. “It was about putting emotions, moments and memories into the most meaningful words.”

Heyming is perfectly bilingual. During the press conference, Heyming shared three poems – one in English, one in French, and another written in English and French.

You can read one of the poems she shared, titled “No Ordinary Place,” below this post.

During her two-year tenure as Poet Laureate, Heyming will lead virtual and in-person workshops and events dedicated to writing poetry.

She plans to bring together engaging content and experiences, in English and French, to help inspire the community to read, recite and write poetry.

“As a winner, I want to be someone who is bilingual and hybrid by being available in French and English, in person and virtually,” Heyming told those gathered at the press conference. “I hope my position, my legacy and my project will be more accessible to more people.”

Heyming will also contribute to terra north/nord, the e-zine created by Nash during his tenure as Poet Laureate.

The new Poet Laureate said she also hopes to create video content of readings and workshops that can be used not only by readers and poets, but also as educational resources for teachers.

Constantineau began his tenure as Greater Sudbury Poet Laureate in March 2020, just before the onset of the pandemic.

“I faced COVID,” she said. “Let me tell you, when I realized that everything I did had to be done on Zoom, I was both thrilled and really shaken.”

She said she wanted the option to “leave and go somewhere else” while in office. Constantineau, who has a physical disability, had also wanted to raise accessibility issues as part of his role.

But she said the pandemic had the effect of putting everyone in the same boat. “Nobody could go anywhere,” Constantineau said. “We were all the same, which I hope will never go away.”

He said the idea of ​​Greater Sudbury having a poet laureate originated during the tenure of one of his predecessors as mayor, John Rodriguez. He credited Rodriguez for identifying Nash as the city’s first Poet Laureate.

“For 12 years, the portfolio has strengthened the vibrancy of our community and supported the artistic, cultural and creative expression of citizens and local groups,” said Bigger.

It was no ordinary place.

He had a strange attraction

and a strange grip

on those born there,

and on those who thought

to call him at home.

its progress can be tracked

through the black rocks, dull

which act as mapping markers

the way back. We know

because we rarely leave.

And those who do

This strange place is able

to make you feel so lost

of men and women

who choose to spend their days

on which they built their lives.

And yet it’s the only place

where I really found myself.

other campaigns in the hopes

to find what I have never felt here.

This is no ordinary place, and I

trust that he will keep me.