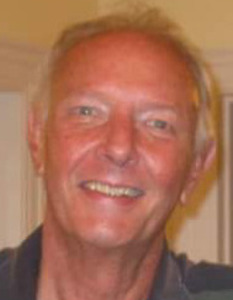 CUMBERLAND [mdash] Steve Vandenberg passed away on June 21, 2022, surrounded and supported by his family.
He was born Jan Stephen Vandenberg on January 9, 1947 to Mary Katherine (Pagenhardt) and Dirk Vandenberg. Raised on Grant Street, Cresaptown, Steve spent endless hours playing ball on the Cresaptown school grounds with his neighborhood friends. Although he was a naturally gifted athlete, he trained tirelessly, driven by the true joy he found in playing ball. This passion and dedication led to outstanding high school baseball and basketball careers, including two state basketball championships and Dapper Dan and Babst awards. An excellent (and rare) screw pitcher, Steve was drafted by the Mets out of high school. However, he wanted to go to college and chose to attend Duke University to study history and play basketball for the Blue Devils. He captained the team and was selected to the All-ACC Tournament First Team in 1969 and received the Glen Mann Jr. Award. His career included many notable games, including an epic 33-point performance against the ‘UNC at the 1969 Senior Day game at Cameron (https://tinyurl.com/yeypnysz). After college he played professionally in Spain and Belgium before returning to Cumberland to start a family with his first wife, Mimi. After briefly working in broadcasting, he became “the world’s greatest paperboy”, publishing The Shopper for over 30 years.
Steve was 6’8 tall, but it was his giant heart that made his presence so important. He was kind, compassionate, and generous with his love and his time. He loved people, greeted everyone with a smile and really enjoyed talking to everyone he met. Because of this, it took him five times longer than anyone else to get to the market or walk down the street, but he enjoyed every minute of it! Throughout his life he has mentored, encouraged and helped countless people in their pursuits of athletics and other dreams. He coached, guided, wrote letters of encouragement and took every step possible to help them succeed on their journey. Selfless to the core, he did these things quietly (usually only the person himself knew). Steve was also extremely humble and enjoyed celebrating and enthusiastically sharing the accomplishments of others. After scoring the winning basket in a game in triple overtime, he carried his teammate, Fred, on his shoulders to celebrate his performance in the game (this is just a small example).
A bit of a renaissance man, Steve was also a gifted artist, writer and musician. He has always had a passion for music, which began at an early age with a love for the piano, and the music and piano playing of Jerry Lee Lewis. His love for “The Killer” was so strong that college recruiters used him, scheduling his visits to campus when Lewis was in town to play a show. Steve’s own piano playing was accomplished. When someone commented that he was “the best ball player that ever came out of Allegany”, he was often quick to counter with his joke, “No, I’m the best piano player that ever came out of Allegany. ” He loved to perform, and if you were lucky, you had the chance to see him play at the Bistro, the Wine Cellar or on any piano in any room he walked into, whether he was invited or not. Steve didn’t just love music, he was filled with music, if you noticed, as he moved through the world he was actually dancing to the music that was constantly playing in his heart.
Steve loved life; and he lived his life. He never had a bad day, as he found joy and pleasure in the simple, everyday things in life, savoring everything from conversations with friends to the smell of morning coffee and cooking a great meal for the people he loved. He enjoyed every moment and focused on the “NOW”.
Steve has always loved nature and one of his favorite places on earth was the river. The boat trips, the “jacuzzing out” and the good times spent with his family and friends at the Fourche du Cacapon were some of the central joys of his life. He often went on Sunday hikes, because he said that it was in nature that he felt closest to God.
Steve was devoted to his family. He was a kid at heart and loved playing with his kids, grandkids and all the “rugrats” in the world. And he really loved his friends, his teammates and everyone in his life. If you knew Steve, you felt special, and that was because you were really special to him. Steve was a bright light in this world, and the light of everyone he met burned a little brighter afterwards.
Steve was predeceased by his parents; his brother, Paul Vandenberg; and his son Jan Vandenberg.
He is survived by his “charming” longtime partner, Monica Hast; his sister, Mary Jo Wolters; his daughter, Abby Vandenberg; his grandsons, Charlie, Will and Lincoln Vandenberg; daughter-in-law, Jenny (Strauss) Vandenberg; his beloved dog, Bella; as well as his many beloved family members and close friends.
The joyful celebration Steve wanted with his favorite music, good food, Coors Light, and family and friends enjoying being together will be at 5 p.m. on June 29 at Hast Farm (https://hastfarm.weebly .com/ ).
In lieu of flowers, a scholarship fund will be established later. Details will be posted on Steve’s Facebook page.
Steve’s family would like to thank the nursing and support staff at UPMC Western Maryland for their incredible and compassionate care. As Steve said, “These are our heroes.”