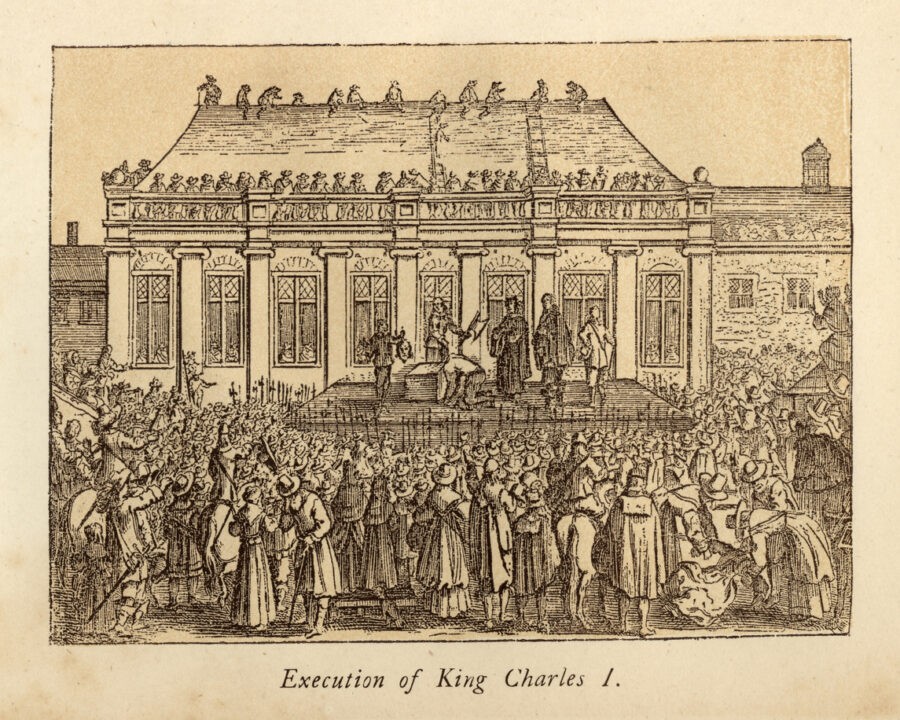 In the previous episode of this series, I gave the historical and religious background to the English Civil War – which sowed the seeds for every important institution that would take root on American soil. As noted earlier, many real issues were at stake in the struggle between the Crown and Parliament.

Country folk, gentry, nobles, high church Anglicans and persecuted Catholics feared that the power of Parliament would benefit townspeople, merchants (including slave traders), speculators of the new rich and Protestants radicals. They therefore rallied to the efforts of monarchs such as James I and his son Charles I to increase the king’s power, independent of Parliament.

This led them to support a political theory that James I called “the divine right of kings”. From this point of view, the king embodied the law itself, which was identical to his will. Obedience to God required obedience to His appointed ruler on earth, leaving no justification for resistance or revolt. As David Kopel notes in The morality of self-defense and military action, James’s theory was new to the English. It was quickly denounced by both Calvinists and Catholics.

The theory had an ancient precedent. Absolute power of Roman emperors, eastern monarchs and other pre-Christian rulers was still the norm outside of Europe, even in the 17e century. It was not until the collapse of the Western Roman Empire that allowed the emergence of much more decentralized political institutions. The rediscovery of Roman law during the Renaissance gave monarchs a powerful and prestigious weapon in their quest to consolidate power.

Feudal barons would zealously guard their independence throughout the Middle Ages, granting concessions to kings like the Magna Carta. The Church would assert its rights and protect its vast institutional wealth and land holdings, exercising moral authority over the people.

But as we have seen, the break-up of the Church during the Reformation put an end to its political independence and subjected it everywhere to the control and interference of the State. The military revolution of the late Renaissance, with rifles replacing bows and cannons tearing down castle walls, made war too expensive for anyone but powerful monarchs. Professional armies replaced feudal levies, and kings became less dependent on the cooperation of barons.

Turn barons from warlords into courtiers

Across continental Europe, except in the fractured Holy Roman Empire – which effectively ceased to function as a state – monarchs were able to shed medieval checks and balances on their power. In France, the monarchy broke the backs of the nobility in a fierce civil war (the Frondes, 1648-1653). Dukes and earls evolved from quasi-autonomous military allies of the king to courtiers who competed for the “privilege” of holding the king’s chamber pot. This would culminate in their near-imprisonment in the golden cage of Versailles.

Similar centralization took root in Habsburg Spain, where the rights of local communities to vote and raise taxes were revoked by Charles V. In Scandinavia and Russia, monarchs crushed noble resistance, centralized their own power, and enforced religious homogeneity through established, intolerant churches. .

And that is what James I hoped to codify through his divine right of kings. This is what his parliamentary opponents, many of whom were religiously motivated, were determined to prevent. Kopel cites the intellectual landmarks of this resistance movement, noting that radical Protestants in England quoted the Jesuit Robert Bellarmine and other Catholic thinkers on God-given limits on royal power. Kopel writes:

In 1644 the Scottish Presbyterian Samuel Rutherford published Lex, Rex: or the Law and the Prince. The purpose of the title was that the law precedes the king: the monarch must obey the law. In fact, the law is the ultimate king, above any human monarch. Lex, Rex refuted Charles I’s bold assertion, articulated by an absolutist judge, that rex is lex loquens — that is to say, the king is the law that speaks.

The antecedent for rex is lex was the despotism of the late Roman Empire. The antecedent for Lex, Rex was the Old Testament. There, the very definition of the Hebrew nation is the people who live according to the law given by God. The Anglo-American ideal of the “rule of law” embodies Rutherford’s principle. … [S]sovereignty was inherent in the people and granted only conditionally to the king by the people.

Like previous resistance theorists, Rutherford extrapolated a right of resistance from the natural right of self-defense. … One of the ways in which a well-ordered society maintained a good balance of power was to ensure that the government did not have all the weapons: “To strip the people of [arms] because they can abuse the prince, it is to expose them to violence and oppression, unjustly: for a king can more easily abuse [arms] Everyone ; one can more easily fail than a community.

Arguments like Rutherford’s have been widely published and proven persuasive. Charles I’s repeated efforts to establish the monarchy as independent of Parliament, able to tax and raise armies without its consent, ultimately led to civil war. After several years of back and forth bloody Parliament prevailed. Charles I was tried for treason and executed.

The English republic which emerged from this savage conflict might have honored representative principles. But his new policy represented only certain sectors of society. His rule rested on fragile compromises between various Protestant sects, some much more radical than others.

Differing opinions eventually paralyzed Parliament and power fell into the hands of the able and capable Oliver Cromwell. He ruled for five years as a virtual military dictator, without consulting parliament. Cromwell trampled on Catholics, high church Anglicans and many other sectors of British society, who never recognized the legitimacy of his government. Some members of the Anglican Church began to speak of “Charles I, King and Martyr”.

Theocratic temptations emerged under Cromwell’s regime, which banned theatrical performances and attempted to suppress popular celebrations such as May Day and even Christmas as “papist” or pagan. Cromwell’s efforts to suppress predominantly Catholic and pro-royalist Ireland were particularly brutal and helped cement the bitterness against English rule that would eventually secure Irish independence.

During Cromwell’s reign, a wide range of radical new voices were heard. One of the most striking was that of the genius poet John Milton, a true Renaissance man and fervent Republican. He published a series of pamphlets defending his political views, the most influential of which was Areopagitic, which laid out the strongest case yet for an almost new idea: freedom of the press, the publication of the ideas of any citizen without prior government approval. Our own First Amendment owes much of its origin to this document.

When Cromwell died in 1658, there was a wave of support for a return to normality, to the old English system of balance between a limited monarch and Parliament. Charles I’s exiled Stuart heir, his son Charles II, offered to restore it if he received the throne. He returned in 1660, promising amnesty to those who had overthrown and executed his father, and a balanced system of government. As we’ll see in the next episode, a suspicious Englishman soon came to fear that he wouldn’t keep such promises. It would take another civil war, albeit a shorter one, to make sure of that.

John Zmirak is editor at The flow and author or co-author of ten books, including The politically incorrect guide to immigration and The Politically Incorrect Guide to Catholicism. He is co-author with Jason Jones of “God, Guns, & the Government”.