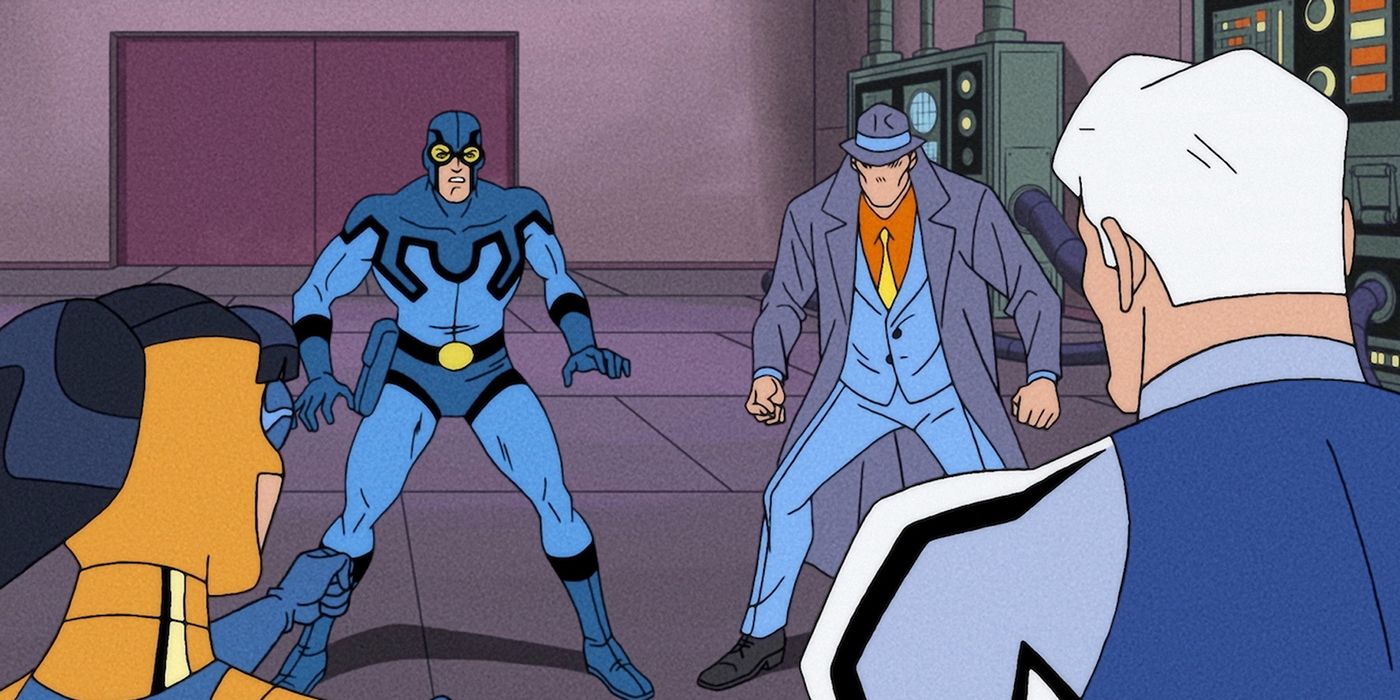 The world of DC Comics goes retro with the Showcase DC short blue beetle. Conceived as a 60s cartoon, the animated short centers on Ted Kord’s incarnation of the iconic hero as he teams up with The Question to foil Dr. Spectro’s plan to corrupt the feelings of people in the world. whole world.

Before the release of the collection, Screen Rant spoke with writer Jennifer Keene to discuss DC Showcase: Blue Beetleresearching the various characters included, capturing the vintage tone of its classic setup and more.

Screen Rant: Of the handful of shorts in the showcase, blue beetle might be my favorite. I know you’ve worked with the studio before, but what really interested you in being part of it?

Jennifer Keene: Well, I’ll tell you what I liked about it. I didn’t know. Jeremy, who wrote the plan, is a huge Blue Beetle fan and Jim Krieg is a longtime comic. I worked with Jim, specifically, as a comedy writer when he hired me for the Green Lantern, it was to do comedy. I’ve done punch for feature films for him, so when he called me about it, he was like, “Yeah, we’re doing a short, it’s about Blue Beetle.” I was like, “Who’s the Blue Beetle? I’m in!”

I had to do a lot of research, find out who he was, and find out all these other characters that I really didn’t know anything about either, like The Question and Nightshade and Captain Atom. It’s always great fun to do a project, do some research, and discover this whole new world that you didn’t even know about before. This may not be the answer [you’re looking for]you probably want me to be a huge comic book fan, but I’m getting there.

No, I think that’s an equally great answer, getting that passion by osmosis almost.

Jennifer Keene: When you’re with Jim Krieg, and when you’re with Jeremy Adams, it’s contagious. I was at WonderCon with Jeremy, and to hear him get poetic about the Blue Beetle and how he came to love it, you just want to step back and absorb it.

He was talking to me about it earlier today and I was really, like you said, sitting back and just enjoying hearing him talk about his passion. He even apologized for his ramblings and I told him, “Keep going!” What do you think were the most interesting things you learned from all that research before you started writing?

This stuff is always fascinating to me, so it was fun to learn. Then just to see this huge menagerie of characters – each incarnation as far as they become superheroes or how they become villains, how they interact – it was just a lot of fun.

What do you think were the biggest creative challenges at the time in taking the research you acquired and Jeremy’s plan and finding a way to bring that to life?

Jennifer Keene: I just wanted to stay true to Jeremy’s vision because he’s a Blue Beetle lover and they had this vision to make it look like a vintage Spider-Man episode from the 60s and 70s. So I looked from old episodes of these cartoons as well as read comics and so I wanted to stay true to that but also make it funny and make the humor relevant for the time being which I think works because I think that format is somehow timeless.

Jennifer Keene: I knew the style it was going to look like one of those old cartoons with color errors and stuff like that. No matter what you’re writing, whether it’s a sitcom episode or an 11-minute animated episode, you still need to match the tone and voice of the show that already exists. Since that stuff was already there and I knew their vision, it was just a matter of matching.

You mentioned the 60s Spider Man as a point of reference. Did you have any other reference points, personally, of this kind at the time?

Jennifer Keene: It’s not animated, but the old Batman series. I felt a bit connected because I have two older sisters and if they had made it I would have been named Batman and Robin because they were fans of that show. I felt like I was working on the right project.

Who would you say was your favorite character to write?

Jennifer Keene: I really enjoyed writing for the Blue Beetle. I love the comedy between him and The Question and I love his reaction to The Question’s objectivism and frustration with it. I think that was my favorite part. But it was also fun to read about Nightshade and Captain Atom and wonder, “Okay, what are their origins? How are they going to function in this world? What will make them funny? Nightshade has darkness, she hates sunlight. Let’s explore that.”

Who would you say was the most difficult of the characters you had to write?

Jennifer Keene: I think that was The Question, because I really had to figure out, “Okay, wait, what is this objectivism?” Go back and remember my I RAN readings from long ago and have him say things that made sense to me as well as The Question, even though they didn’t make sense to me. [Laughs] Because it’s kind of gibberish.

Both Jeremy and Milo said it was recorded in the office before the pandemic. Did you have the opportunity to be there with the actors while they were reading the script?

Jennifer Keene: No, it was a disappointment. I wasn’t there for the recording, it’s always great fun. I missed it, but I was happy with how it turned out. When we did the Green Lantern series, we made this record like a radio show with all the actors together, because sometimes they do it separately and it’s so fun to be on the record because then you hear which jokes land and which don’t and you can kind of hit and change as you need when you hear it. But maybe next time.

Did you at least hear from Milo or anyone else how it was going in the room with the recording?

Jennifer Keene: No, when it was over Jim sent me the show and I watched it and I was like, ‘This is great! I love the theme song.

Who is the one who came up with this theme song, was it you or another writer?

Jennifer Keene: Well, Jim Krieg wrote a theme song, but they didn’t use it. Rick wanted a different song. Who wrote it, did Rick write it? I’m not sure, but it’s great, it’s really funny. I should have watched this before jumping on the phone call, because I keep saying, “I don’t know who wrote it.” [The writer was Andy Sturmer]

How was it for you when you finally got to see it come to life?

Jennifer Keene: Oh, I loved it. I was delighted. What I love most about seeing the finished product of an animated episode is that you see the jokes and the stuff that the artists find that weren’t even in the script. My favorite was the baby putting the fork in the electrical outlet when Spectro was making everyone sad. I thought that was really funny and said, “I’m going to put that in my book.” I’m writing a book, it’s called Jokes that I would have liked to write, and it will go into it.

I completely forgot about that until you just mentioned it, and I’m laughing again, because it was a weird but funny little joke thrown in there.

Jennifer Keene: I love it. I had a debate where one of the people thought the child was trying to kill himself, it was like “No, no, the mother is sad and she is neglecting her child, that’s the problem. The child is not so sad that he wants to end it all.” [Laughs]

You mentioned a few times that you were on The Green Lanternbut how was your return to the DC world?

Jennifer Keene: Oh, I loved it. I’m not immersed in the world of comics, so every time I work on one of these projects it’s a great learning experience, I get to do all the research and find out more about these characters. Then I feel a bit more up to date and not so far from popular culture.

Since the DC animation genre continues to be such a big field, both in shorts and in features, are there any other characters you can think of who you’d like to try in the future?

Jennifer Keene: I would love to work with female superheroes, maybe go revisit Nightshade, maybe Star Sapphire, they could work together to protect the reproductive rights of women everywhere. Maybe that could be their mission.

It would be an interesting story to explore. How do you think you would approach that tonally?

Jennifer Keene: Well, I would approach it like anything, like comedy, but I think like satire, because you want the truth in it. You’d also want to be a truth-teller, but I don’t know if that’s something Warner Bros. would like to do? [Chuckles]

Well they keep taking risks like we see with the DC live in Peacemaker and such, so I think the door might be open for that.

Jennifer Keene: That’s right, that’s a good point. I would like to see that! To see them tackle something real.

DC Showcase: Blue Beetle is available for purchase via Constantine – The House of Mystery on Blu-ray and digital platforms now.

Grant Hermanns is a news writer, interviewer and head of recruiting for Screen Rant, having joined the team in early 2021. In 2015, while still in college, Grant made his film industry debut. entertainment journalism with the user-friendly site Moviepilot until it closed nearly three years later. From there he joined the team at ComingSoon.net and was its associate editor before joining Screen Rant. To say he’s a lover of movies and TV would be an understatement and when he’s not mass consuming you can find him exploring the world of Dungeons & Dragons with friends or slowly going through his notebook. games.