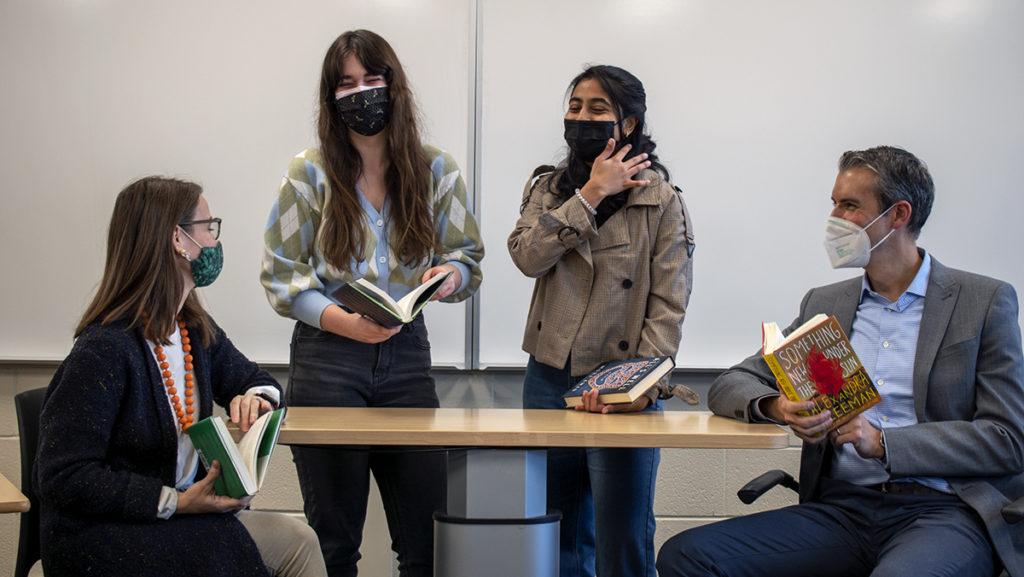 After two years of holding Ithaca College’s New Voices Festival strictly online, organizers hope to hold this year’s festival in person with a virtual element, for the festival’s 10th anniversary.

The festival was established in 2013 by Chris Holmes, chair and associate professor in the Department of English Literature at Ithaca College, and Eleanor Henderson, chair and associate professor in the Department of Writing at Ithaca College, with the goal of connecting students with up-and-coming writers. With the seminar added in the sixth year of the festival, student guides take a two-credit reading course that familiarizes them with the work of the authors as well as a one-credit development course that helps them plan and run the festival.

Holmes said New Voices Seminar student guides read the works of a guest author assigned to them. Each student guide then writes an introduction to be read aloud when their author is announced at the festival.

“[The student guides] have read the works of this author and are very invested in the work of this author. Holmes said. “By the time this author shows up on campus, he knows more about this author than 99.99% of the people living on the planet.”

Holmes said the festival has had to contend with a reduced budget in recent years due to the college’s economic difficulties.

“The festival has become a real event of the year that many people look forward to every April,” said Holmes. “I really, really hope we can get back to a fully funded festival.”

Henderson said students are involved at all levels of the festival, from student directors to student guides.

“It’s a unique experience because the students participate in a very rich literary discussion about texts,” Henderson said. “They can also be behind the scenes planning what this pretty big and important literary event will look like.”

Another opportunity the Writing Department offers students is the Distinguished Visiting Series, which invites writers at later stages in their careers for students to hear readings and take masterclasses. The New Voices Festival also brings writers together to talk about their experiences, but instead invites beginning writers who are no more advanced than students.

Junior Abby McGuire, Deputy Student Director of the New Voices Festival, said the New Voices Seminar is a fun and exciting time where students can read new works and discover new authors together.

“I’ll help [the student guides] familiarize themselves with the material and…with their position in the festival,” McGuire said. “So that once we get to that April weekend, everyone feels ready.”

McGuire said something she really loves about the festival is the collaboration between the different majors on campus. Students from the seminary’s English and writing departments collaborate with students from the school of music and the theater arts department. In the past, music school students have composed original music for the festival, and drama school students have attended the seminar and often engage with the playwright.

“Guides don’t all have to be writing or English majors, we have a lot of people from different schools who are really, really curious about reading new work,” McGuire said. “We all kind of come together and bring different perspectives.”

Junior Amulya Ravitej Bachala, student director of the New Voices Festival, said she loves the atmosphere of the festival because of all the different types of writing students can enjoy.

“If you want to go to the festival, you can read anything [genre] you love,” Bachala said. “I think it’s perfect for literature nerds.”

Bachala said the course the student guides have to take is very much like a regular literature course with the added aspect of festival planning. Students read and analyze the authors’ work while planning and organizing the festival to ensure that everything runs smoothly.

Bachala said she had always wanted to write, but after meeting the authors through the seminar and the festival, she began to realize exactly what was needed.

“There’s something really different when you actually meet the person who wrote those words,” Bachala said. “It’s a very instructive experience.”