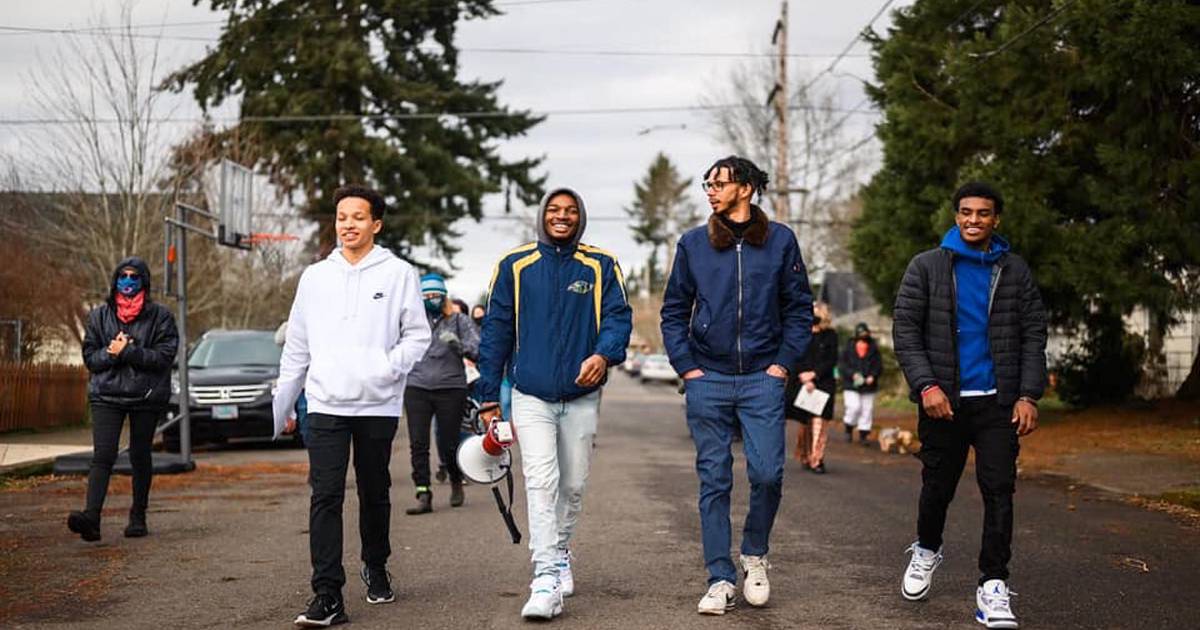 When a dozen young black men and a dozen police officers gather in a church to write poetry together, there is apprehension on both sides.

“They all pull me aside, like they think they’re the only one, saying, ‘I’m not a poet. I can’t write anything deep,'” Lakayana Drury says.

Drury is the founder and executive director of Word is Bond, a Portland nonprofit that works to empower young black men. The poetry workshop is part of a Word is Bond summer series that brings together young people and law enforcement.

Students generally have it easier because they’re used to writing assignments in English class, Drury says. It’s harder for the police: “Poems and the police don’t usually mix.

At the end of the workshop, many writers ask to share their work with the whole group. Their confidence was further boosted this spring when poems they wrote last July at Vancouver Avenue First Baptist Church were published in Picture me soaring (Word is Bond, 112 pages, $20).

The poetry workshop is part of Word is Bond’s Rising Leaders six-week paid summer internship program for black men ages 16-21. Rising Leaders “ambassadors,” as they are called, do a ropes course, get ready for costumes, go camping, and lead walking tours of their neighborhoods.

At their last event with the officers, the young people meet them for a social event at Dawson Park in North Portland, where the officers attend in uniform for the first time during the program and the ambassadors wear their typical street clothes rather than work clothes.

Drury thinks poetry is a deeper and more effective way to get the group to share their life stories than telling them to sit in a circle and get to know each other.

“What I think is special about Word is Bond is the focus on the voices of young people,” says Picture me soaring writer Sgt. Leland Gilbert of the Hillsboro Police Department. “Especially for young black men, it’s not a normal thing for them to be in charge of conversations.”

In the original 91 poems of Picture me soaring, certain themes emerge. In the “Dear Other Side” section, many police officers wrote letters to “bad cops,” revealing the tension within law enforcement. “I’m not a different person when I put my gun and badge on, am I?…I’m sad to admit I can see why so many people don’t trust the police right now “, writes the officer Kyle Hefley of the Portland police station.)

Meanwhile, the students express their fears of police interactions. Simon Abraha, who attends La Salle Catholic College Preparatory in Milwaukie, writes of “being pressured by the police / For no reason, like I’d committed treason… I was so scared I thought I I was screaming but I was whispering / I got no freedom in this land / But I’m still thriving.

Drury himself has enjoyed writing poetry for two years and is thrilled to make this art form accessible to Ambassadors.

“We’re breaking this myth of what poetry is,” he says. “It doesn’t have to be that old thing from a thousand years ago. It can be a fun and flowing shape.

TO BUY: Picture me soaring is available at mywordisbond.org/shop/picture-me-thriving-poems.

Extracts from poems in Picture me soaring

“Not What You See” by Sergeant. Leland Gilbert

Imagine me, but not what you see;

Not my sex, my eyes or my teeth

The landmarks I passed

The thoughts that I had

Promises I’ve made, kept and broken

Imagine me, but not what you see;

Imagine me, but the me of

Leland Gilbert: “The poem is ambitious. It’s about overcoming the tendency to categorize people and make assumptions based on appearance. It’s just a really toxic problem for our society. I have this wish that two new people could just meet as people and get to know each other through conversation and experience. This is the imaginary world of Leland Gilbert.

Hamaya, 19, is a graduate of McDaniel High School and will study mechanical engineering at Oregon State University in the fall.

Where is my seat ?

Well my place is not here

Here, where we pay rent and where we hear the

My home is far

It crosses other worlds and it is difficult to

There are no street lights so

It’s been a long time since I

I took it for granted and now light

My home is a place where you go

The dry land is cracked and thirsty

Even if your feet are clean, in the end

You will have dirt everywhere

Nine months of sunshine to be exact

Every day you become a shade darker

Nigusu Hamaya: “I moved here from Ethiopia in 2012 when I was 8 years old. I knew almost no English. In Ethiopia, the way they talk about the United States is like heaven. I imagined a big house and tons of food in the fridge like in the cartoons and that we would be super rich. Instead, we moved from apartment to apartment and paid rent. It was the biggest difference.