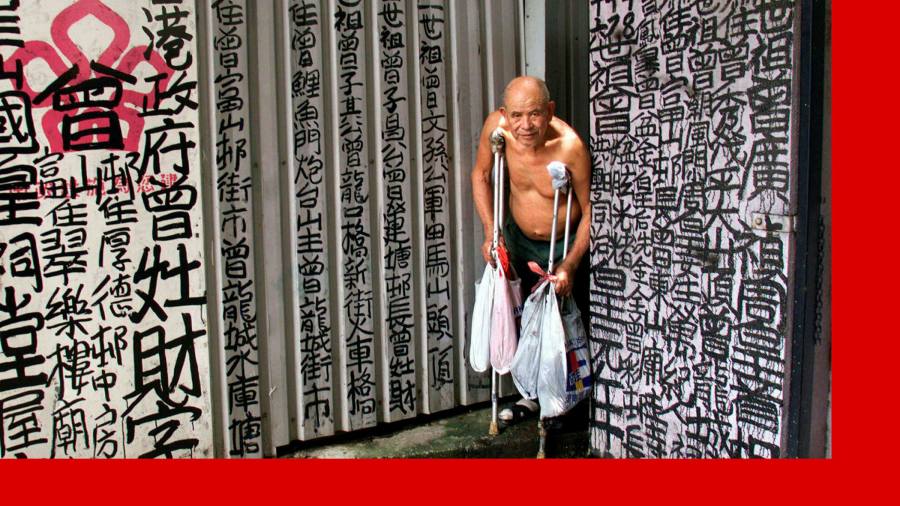 For decades, Tsang Tsou Choi – shirtless, a towel around his neck, supported by crutches – roamed the streets of Hong Kong armed with bottles of black ink and a calligraphy brush. From the 1950s to the 2000s, he transformed everything from streetlights to telephone booths into undulating views of Chinese characters. His scuzzy, calligraphic graffiti had a hit-and-run quality; as soon as they were painted by the city’s sanitation department, he returned to rewrite them. What do Tsang’s posts, filled with wacky tales of a lost emperor and celebrated at Art Basel Hong Kong later this month, mean?

Tsang was born in 1921 in Liantang Village, Guangdong Province, southern China. At the age of 16, with little formal education, he arrived in Hong Kong. For much of his life, Tsang worked in manual labor and garbage collection (in 1987 he seriously injured his legs after a garbage can fell on him). He lived in a small, run-down apartment.

One of his mysterious claims was that his ancestors once owned the territory of Kowloon, the peninsula north of Hong Kong Island. Tsang said he had seen a family tree that linked him to a prominent courtier from the ancient Zhou dynasty. His graffiti was filled with jerky references to this lineage, accompanied by a rebellious attitude towards the British authorities who had apparently stolen his land. A typical piece might include the exhortation “Down with the Queen of England” and “Fight with Britain”, alongside his self-proclaimed title, the King of Kowloon. Sometimes he embellishes his right even more, claiming the imperial throne of China itself.

Tsang’s script crawled over walls, pillars, and even cars. He was drawn to symbols of British power, leaving his mark around the city’s Victoria Park or on colonial postboxes in Hong Kong (apparently the royal regalia proved irresistible). Whether or not you considered his graffiti an ominous explosion or the writings of a doomed dreamer, his lacerating poetry seemed to be everywhere – a feature of the cityscape itself. Tsang has become such a cultural icon that he once starred in a commercial for household cleaning products brand Swipe, in which he used the detergent to wipe his handwriting. (His passion proved too strong for his wife, who left him.)

The art world seems to have decided that Tsang, who died of a heart attack in 2007, is more of a genius than a madman. Lucie Chang Fine Arts’ Art Basel presentation will show ink-on-paper works, including an inscription on a map of Kowloon, alongside ephemera such as brushes and markers. (The works are from collector and curator Willie Chung, a close friend of Tsang.) The gallery will also hold a solo exhibition by Tsang in its main space, featuring objects he drew on alongside his collection of televisions, kettles and newspapers.

Institutional recognition dates back to 1997 – the year Hong Kong’s sovereignty was transferred to China – when Tsang was included in Cities on the move, the influential traveling exhibition focusing on East Asian urbanism and art. In 2003, his work could even be seen at the Venice Biennale. In 2013, a Vespa adorned with Tsang’s graffiti fetched HK$1.84 million at a Sotheby’s auction.

For his part, Tsang seemed to show little enthusiasm for the trade. “I don’t care about money and fame,” he told an interviewer a few years before his death. “They should just give me back the throne.”

What explains the King of Kowloon phenomenon? You can link the Tsang to an older tradition, says researcher Nancy P Lin, who studies Chinese art and urban space. Her writings on electrical boxes are almost reminiscent of premodern monumental inscriptions, she says, the “stone stelae that bore the authority of the state.” Or perhaps we consider his work in the standards of classical calligraphy, suggests Nixi Cura, a specialist in Chinese painting, with its dark and dense tones, applied with a thick brush. Take a closer look and you may even spot his use of feibaior “flying white”, says Cura – an age-old calligraphic technique in which the inked brush is allowed to dry, the bristles flared out to produce striated strokes.

And yet, says Cura, is it even appropriate to apply these art-historical terms to a graffiti artist? In many ways, his pieces bear little resemblance to recognized schools of calligraphy. Often, Tsang’s script seems to follow his own obsessions. The lettering is often askew, rickety and disproportionate; the sentences move in all directions, randomly incorporating Roman numerals.

From today’s perspective, Tsang’s graffiti also seems prophetic. It’s hard not to see his disobedient salvos as a precursor to the freewheeling art of the Hong Kong protest movement, which erupted in the city in 2014 and 2019. They seem to prophesy the “Lennon Walls” in particular. sparkles and rainbow from the umbrella. Movement, where urban spaces were covered with hundreds of colorful post-its filled with messages of resistance.

In recent years, concerted efforts have been made to preserve the handful of surviving works by Tsang. A disfigured pillar at the Tsim Sha Tsui Star Ferry pier is now protected by a clear plastic shield. Several of his pieces reside in the collection of the new M+ museum in Hong Kong, including a pair of labeled wooden doors, commissioned by a local photography studio.

Such efforts speak to how Tsang’s story continues to haunt the public imagination: a figure for Hong Kong’s threatened sense of identity as it transitions from British rule to its new Chinese overlords. . Since 2020, the territory has experienced an accelerated erosion of civil liberties, in particular with the passage of the national security law, which has stifled the pro-democracy movement. It was in this context, Cura says, that Tsang’s screeds became “a perfect metaphor for that sense of something lost.”

If, as Picasso said, “art is a lie that makes us realize the truth,” then the same paradox is at work in Tsang’s imaginary world. His art which was born out of illusion, words slipping between meaning and nonsense, gave the citizens of Hong Kong a poignant feeling: the memory of an ancient challenge. And maybe the hope that some things – including boldness in the face of authority – will never really go away.