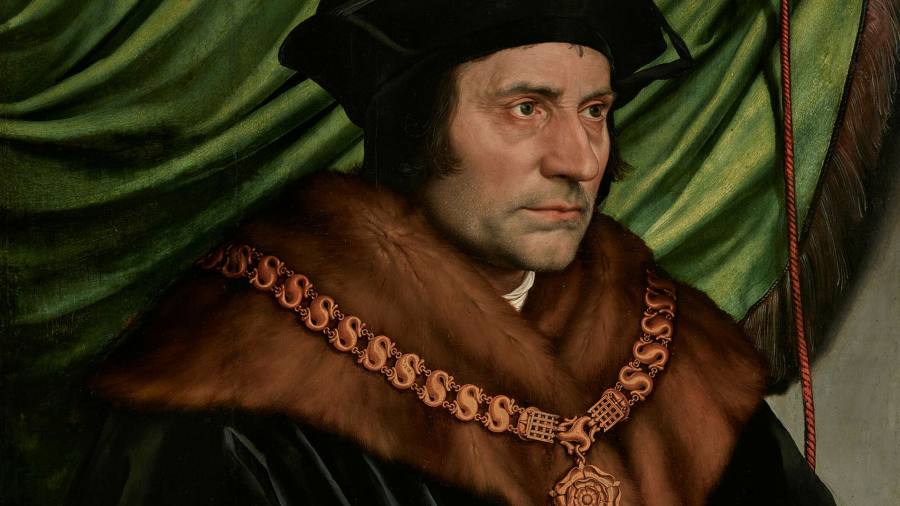 New York’s Morgan Library mistitled its exhilarating exhibit Holbein: capturing the character. Hans Holbein the Younger, virtuoso portrait painter of to let out Tudor London certainly painted many characters: doomed courtiers, smug merchants, pious not-quite-beauties. But if he captures a trace of their thought or personality, it’s often like a first impression, jotted down in a sketch en route to a final work.

In his luminous, perfectionist oils, he displayed his sensitivity to sumptuousness and his unparalleled eye for surface varieties: fabric, skin, fur, and the varying glows of enamel and gold. Holbein noted his sitters’ features and markers of their status in minute detail, providing a window into the fashions and obsessions of the elites of his day. No fiber on a skin, no blade of grass or micro-symbol on a hat badge escaped his attention. But when it came to moral sense, capacity for kindness or taste for pain, he showed absolute discretion.

The revelation of the Morgan show is that Holbein applied this final layer of reticence by recording, then deliberately ignoring, traces of the inner lives of his subjects. Organized jointly with the Getty Museum in Los Angeles, the exhibition covers Holbein’s career and includes a handful of preparatory drawings. These sketches, quickly executed in chalk, ink and watercolour, on pre-tinted flesh-toned paper of a healthy English aristocrat, sizzle with a spirit of improvisation. In the drawing of an adolescent Henry Howard, Earl of Surrey (1532-1533), the proud chin and pursed but sensual lips suggest an inner battle between arrogance and insecurity. Holbein noted barely detectable asymmetries in the boy’s face, the divergent creases of the eyelids, one eye slightly smaller than the other. He looks like trouble – and, to Henry VIII, he was.

William Parr, on the other hand, appears in the drawing of Holbein (1538-1542) as a sensitive man. His light blue eyes and slightly slanted cheeks, lined with a soft down of red beard, exude an air of quiet humility. Holbein’s perception matches descriptions passed from witness to source to Cokayne Full Peerage. Parr was a “sincere, simple, straightforward man, neither cunning nor involved”, whose “delight was music and poetry and his war of exercise”.

The centerpiece of the show – apart from the 1527 portrait of Sir Thomas More, borrowed from the Frick – is a pair of portraits of young nobleman Simon George. The chalk and ink study (c1535) captures its essence. Wavy dashes mark straight hair, a perfect outline outlines her cheeky nose, and a flutter of slashes fills in the tousled stubble of the week. The man is seated in front of us, in profile, as if he were still in the room, the echo of an ironic reply suspended in the air.

The superb painting (1530-40) reconstructs the man in color, giving him an almost hyper-real aura. He has a sumptuous beard, as long and thick as beaver skin. You can feel Holbein vibrating at the black sheen of an elaborate leather jacket, the delicate threads of an embroidered collar, the glimpse of a brushed velvet jerkin, and the feathers fluttering softly above Simon’s hat.

Moving from sketch to oil, Holbein transformed the dynamic young Cornish mortal into an unknowable personality in a deliciously varnished shell. Like many of Holbein’s subjects, it comes with a collection of sometimes cryptic status symbols. The purple carnation he pinches between two fingers could indicate an engagement. Golden pansies strewn across his black hat could be a meditation on mortality. A hat badge representing the myth of Leda and the swan suggests amorous intentions. The entire seductive repertoire of sixteenth-century emojis testifies to a richly connected participant in society. And that doesn’t reveal anything about his psychology.

Of all the cast of characters Holbein painted, Death is perhaps the most animated. He created a series of drawings for a book, Pictures of death (c1526), ​​based on the medieval Dance of Death, in which a skeletal emissary comes to claim his victims, be they plowman, duchess, merchant or monk, with woodcuts by the masterful engraver Hans Lützelburger. He had already collaborated with Lützelburger on a printed alphabet (c1523), treating each Latin letter from A to Z as a miniature scene for the macabre antics of Death. Unlike almost everything he painted, these drawings were not commissioned; Holbein let his imagination run wild and the results made him more famous than anything else he did.

Death takes many forms and takes on a range of moods in these tiny tableaux, which can be difficult to decipher in the Morgan’s dim lighting. The hyperactive skeleton is more expressive than any of Holbein’s flesh-and-blood subjects, and more creative too. He pulls an abbess out of her convent by the collar and drives a spear into a knight’s armour, carefully piercing her belly. But he can also be gentle, escorting an old man with one hand while serenading him on a zither with the other.

Unlike the flattering portraits of VIPs, Pictures of death designs skewer the rich and powerful with everyone. Death sneaks up on a senator as he panders to a luxuriously dressed interlocutor but ignores the nearby beggar. He stings a judge who demands a bribe from a wealthy litigant. Each scene contains a small hourglass reminding us that time is always running out.

Even when the scene isn’t explicitly morbid, death permeates Holbein’s portraits – he worked, after all, in the heart of a bloodthirsty court. More was executed for treason, defeated by the powers that made him. Just like Henry Howard. All the others die too, of course, as Holbein reminds us quite often. Each of his paintings is indeed a memento mori. But along the way to a common destination, he granted his models (and us) a record of their magnificent vitality.