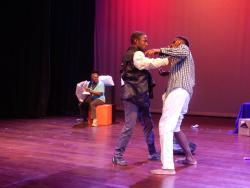 Another appeal was made to the government to provide Jamaica with a purpose-built center for the performing arts. It came on Sunday from a leading theater practitioner – actor, director, educator and performing arts group leader Fabian Thomas.

He was speaking at the Philip Sherlock Center for the Creative Arts (PSCCA) at the University of the West Indies (UWI) to an audience and participants in the university’s annual theater competition, Tallawah. It was closing night and Thomas commented on both the importance of a national performing arts venue to the country and the importance of theater skills for individual success in a multitude of careers and vocations.

This was before he, as chief judge, announced the contest winners. The other judges were educator-writer-performer Professor Opal Palmer Adisa and former actress Dr Coleen Lewis, who is now focusing more on her work as a lawyer.

In welcoming the public, PSCCA chef Michael Holgate explained that this year’s opening was scaled down and did not include plays, a regular menu item since Tallawah’s debut in 1968. could have been good, he pointed out, since it allowed contestants to focus on the basics of writing and producing.

Workshops were offered, among other things, on the selection of objects, stage presence, acting and theatrical techniques (lighting, sound, costumes, sets).

Participants were required to attend all workshops, which were designed to improve the overall quality of Tallawah’s entries.

The competition ran from Wednesday to Friday, with Sunday being dedicated to an awards ceremony and the presentation of The Best of Tallawah, the repeated staging of the main award-winning plays.

In his address, Thomas said Jamaica was in distress from the twin plagues of COVID and crime. He said, “We have to heal our hearts through our art.”

Tallawah is important, he stressed, because it shows participants how to navigate the world. “The arts are a pathway to any good career – to politics, to the pulpit, to the stage, if you like,” he said.

He touched on some critical aspects of a production. The creative use of lighting was one, and he pointed out that some rooms didn’t have enough of it. (At least one piece was staged in dim light.) “It must be used deliberately and intentionally as part of a performance,” he said.

The writing is where the story, the journey, begins, he says. The writer “adds to the ongoing dialogue” in society. Those using preexisting material should reframe and refresh it, and ask, “How can I add to the story?” Directors, too, should try new styles and techniques.

He revealed that the judges would recommend that the Tallawah organizers make a distinction, for arbitration, between the existing work and the original writing of the participants.

Actors need to know how to project, he advised, mentioning the difference between a stage whisper, which was meant to be heard, and a real whisper. Even when speaking passionately, he said, actors shouldn’t gossip.

The judges awarded high congratulations and the following “Best of…” awards:

2. BEST COSTUMES: All Arwe One (UDAS)