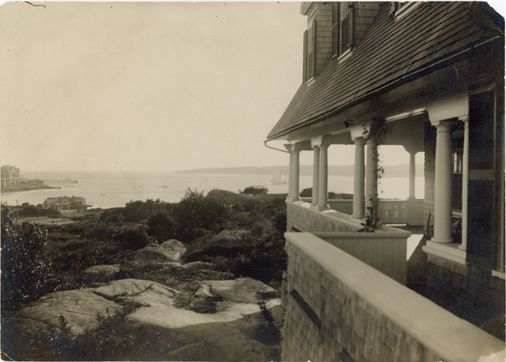 Eliot’s father had a house built at Eastern Point. In one of the letters included in the museum exhibit “Eliot’s Gloucester”, the poet’s older brother describes it as “a house on the top of the hill behind the old Beachcroft Hotel”. The TS Eliot Foundation, its current owner, now uses the house as a writer’s retreat.

Get the Big Task

Your guide to staying entertained, from live shows and outdoor entertainment to what’s new in museums, movies, TV, books, restaurants and more.

“Eliot’s Gloucester” runs until October 2. A small show, it consists of only about thirty articles, but its interest and charm are considerable.

The clearest demonstration of Gloucester’s importance to Eliot is found in his “Four Quartets”. “The Love Song of J. Alfred Prufrock” and “The Waste Land” helped transform English poetry. The ‘Quartets’, one of the great long poems in the language, does something different. They recognize and embrace a personal transformation.

The last line of “The Waste Land” repeats the Sanskrit word “shantih” three times. “‘The peace that passes understanding,'” Eliot writes, “is a weak translation of the content of the word.” The “quarts” suggest that he has attained something approaching this condition. It offers a sort of sustained, subdued, barely suppressed spiritual and intellectual ecstasy.

Three of the “quartets” derive their titles from places in England. Eliot felt an intense connection with: “Burnt Norton”, “East Coker” and “Little Gidding”. The title of the third poem, “The Dry Salvages”, comes from Gloucester – or, more precisely, its coasts – “a small group of rocks, with a beacon”, explains Eliot in an introductory note. Revealing or not, it is the only one of the “Quatuors” that he feels the need to situate, even in its pronunciation: “rhyme with soothes.”

The show includes a copy of the pamphlet of “The Dry Salvages” which Henry Eliot sent to the Sawyer Free Library in Gloucester, in 1942. In an accompanying letter, the bewildered brother writes: “I do not remember that the Reefs were called anything other than ‘Dry Salvages’, and I never heard ‘Salvages’ accented on the second syllable. Maybe it’s a memory trick, either his own or the poet’s. maybe just an older brother rolling his eyes at something a younger brother did. Maybe it’s even both.

There are 14 letters from this younger brother. One is Eliot’s oldest, written in Gloucester, when he was 9 years old. Nearly 20 years later, he reassured his mother of his intention to sell several family properties. “I should think that E. Point at least should achieve very well.” Can you say he supported himself by working in a bank?

Material considerations of a different kind are evident 30 years later, when he wrote to a cousin to thank her for having sent a “little piece of bacon”. Later that year, he teaches at Princeton and plans to come and visit him in Milton. Eliot writes that he “could take the tube to Ashmont, as usual”.

The idea of ​​such an august figure, weeks away from going to Stockholm to accept his Nobel Prize, straddling what is now the Red Line is somewhere between delightful and confusing. But it also has a literary echo, one that brings us back to the “Quatuors”.

when a metro train, in the tube, stops too long between stations,

And the conversation slowly rises and fades into silence

And you see behind every face the mental emptiness deepen

Leaving only the growing terror of nothing to think about

Although “Eliot’s Gloucester” is primarily textual, it also has a visual component. There are two architectural renderings of the Eliot House; a watercolor of it, painted by one of his sisters, and a photograph; three portraits of Eliot, a drawing, a monotype and a photograph (young man); an oil portrait of his father; a photograph of his mother (the resemblance to his son is striking); and some photographs of sailboats, donated to the Sawyer Free Library by Henry Eliot.

In the museum’s auditorium hang four paintings by Bruce Herman inspired by the “Quartets”. They have a distant family resemblance to Richard Diebenkorn’s “Ocean Park” series, which is a compliment for both parties. In this auditorium on October 1, John Buchtel of the Boston Athenaeum will discuss “TS Eliot’s New England Roots.” For more information, visit the museum’s website.

Mark Feeney can be contacted at [email protected]