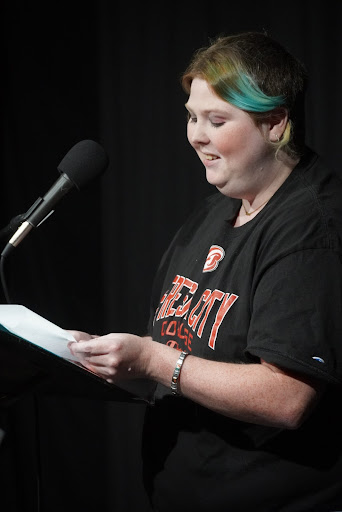 On October 15, instructors and students from across the Central Valley read their short stories, poems, and other original literary works in stores and clubs around Fresno’s Tower District.

Professor Lee Herrick of Fresno City College, who is also the co-founder of LitHop, brought some of his students to perform their poetry at the Labyrinth Art Collective in the Tower District. He describes his students as “brave, inspiring and beautiful minds”.

Katie Quigley is taking Herrick’s creative writing class for the first time this semester. Herrick taught her to look at what was on her mind and write about it, and she did. “I tend to write about what I’ve been through and what I’m going through right now,” Quigley said.

Quigley described his debut poem “Child in Hiding” as amusing “it’s about playing hide and seek as a kid hiding in a closet”, about being part of the LGBTQIA+ community while being ” in the closet” at a young age.

Quiglely’s second poem “A Sapphic’s Sestina” is about his current relationship with his girlfriend. She wrote it as an assignment a few days before LitHop, Professor Herrick explained to her that a Sestina was very difficult to write, but hearing this encouraged her even more to perform it, “I saw it as a challenge and I really like the way it turned out,” Quigley said.

The last poem she performed “Know Good Man” which talked about her experience in the past with her father and her past relationships with men.

There were seven venues which featured 32 readings from student writers to award-winning authors, including FCC English Instructor David Campos, winner of the 2014 Andres Montoya Poetry Prize and the annual Prairie Schooner Strousse Award for Best Group of poems in Prairie Schooner. At the event, he presented poetry in the form of an abstract film.

Marisol Baca, an FCC English teacher and author of the poetry book “Tremors,” has been named Fresno’s first female and first Chicana/Latinx Poet Laureate for 2019-2021. The venue took place at The Revue where she discussed a funeral she attended as a child, with memories of her mother and aunt making New Mexico chili at her house. She was nominated for the Pushcart Prize for Poem.

FCC instructor Lisa Leiberman is freelance and has published over 2,500 articles in newspapers and magazines such as San Francisco Examiner, Backpacker Magazine and Working Mother. She read an excerpt from her upcoming book “All My Bad Boyfriends,” where she read about her experience with an ex-lover who turned out to be a serial criminal.
She writes the “Sex in a Small Town” column for the Valley Voice in Visalia.

April Lewis, another FCC English teacher, is the author of her first book, “Black Feminism and Traumatic Legacies.” The reading took place at Splash at noon. During the event, she opened up about being a queer black woman in a conservative state of Texas, after learning she was ‘pretty for a black woman’ and that had to be taken as a compliment in some way. .

Brenda Venezia also teaches at the FCC and also read at the event. She is the founder of “Fresno Women Read”, a small community organization dedicated to creating literary events focused on women and non-binary writers.

The event is coming back from its hiatus like many others since lockdown, and has been preparing since May 12, 2022 for the final event in October.