FOR THE LOVE OF VERSE 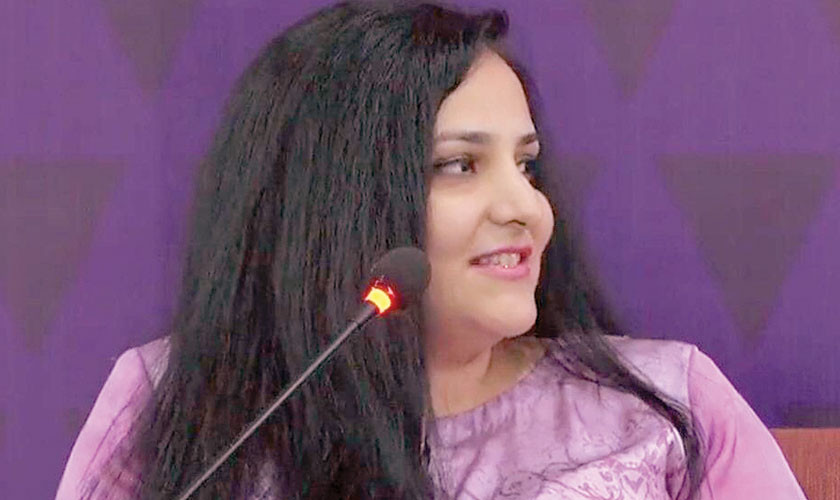 Fatima Ijaz is a published poet born in Karachi. She studied Liberal Arts at Hartwick College, New York (USA) and completed her undergraduate degree in English at York University in Canada. Later, she completed her master’s degree in English linguistics at Eastern Michigan University. She won first prize at the McLaughlin Poetry Competition in Toronto (2007). She then returned to her hometown, where she continued her studies in English Literature at the University of Karachi. Ijaz now teaches English and speech at the IBA. She is also the editor of an online literary magazine called The Pandemonium Journal. She participated in Karachi Literature Festival in 2020 and 2021.

His work has appeared in numerous publications including The Aleph Review, Ideas & Futures and The Bombay Review. Some of her works include The Shade of Longing and Other Poems, which she authored. In an exclusive interview, Fatima discusses the scope of English poetry and her future projects as a writer…

You! What prompted you to turn to poetry as a creative medium as opposed to novels or short stories?

Fatima Ijaz: Above all, the intensity and challenge of a poem – it delves deep into an experience and yet resists total surrender to the reader. It’s boldly direct but disappears before you can capture it – like watching a mermaid in a glittery sea.

Don’t get me wrong, I find novels fascinating. As I recently said in response to a similar question at the Quetta Literary Festival, novelists are deeply committed individuals and have the courage and strength to write in detail. However, as a reader, I always seek out the dark creativity of poetry, even in the longest forms. I want to move towards writing short stories myself, and have several unpublished ones in my journals.

You! English poetry is often thought to have remained on the fringes of the Pakistani literary scene. To what extent do you agree with this statement? If yes, why is this the case?

FI: Poetry tends to be inaccessible – out of reach, like stars fixed and present but not really there in the here and now. This aspect probably makes poetry an acquired and exclusive taste. I suppose there is the possibility of writing a sort of loaded and militant poem, which is goal-oriented and specifically wants to be heard loud and clear.

This is the poet’s intention – does he want to be known or even exposed? Add sensationalism and I’m sure the poetry would begin to flourish, but the poem still demands sophistication and dignity, even in the wake of blatant tears and tragedy. You will never find a contentment similar to that found in soppy or unnecessarily violent dramas and absurd and banal comedy films in serious poetry! Reading poetry will improve and refine you as a human being – I really encourage it.

You! Is there a shortage of strong talent in the field of English poetry in Pakistan?

FI: There are many talented English poets in Pakistan, as volumes of The Aleph Review will attest. The question is: is being a poet your elementary condition? It cannot simply be an external or social activity. Poetry is an indulgence in the extreme solitary life and, like all disciplines, needs years of committed practice.

You! What can be done to strengthen the reach of English poetry in Pakistan?

FI: We could introduce an MFA in creative writing into our universities – where there is proper and dedicated study and practice under established mentors. This might inspire local publishers to consider English poetry as a serious form as well.

I designed a few poetry workshops and took them to a few universities. Recently, I also created a more detailed five-day workshop. More established poets could also pass their knowledge through such acts perhaps.

You! The poems in “The Shade of Longing” have been described as “personal memories of times, people and places that no longer exist”. How has memory influenced the structure and content of your collection?

FI: I thought a lot about “locked time” that we no longer have access to – even though we lived in that time. Only on the wings of memory could I hope to travel to those distant places in the now deserted landscape of my own mind. I traveled – like a sci-fi adventure – and came face to face with my past and my old ways of seeing the world. Some of them were masked and difficult; others were more welcoming, as if they had been waiting for me for years. By holding the memory lantern and being persistent, I was able to safely revisit selves lost in time. This process resulted in “The Shade of Longing”.

You! A veteran poet writes that your “poems read like links in a chain…that keeps us bound to both the past and the present…[and] also define what the future holds for us”. How has this technique enriched your ability to rediscover the past through your work?

FI: I think you can be in an intensely alive moment because of this parallel ability to be here and in the past at the same time. It is multitasking in a sense and creates the possibility of rich conversation – it also creates the “new” future, as your will participates in altering past and present realities. This experience was powerful and gave me the strength to go further into the wild reaches of the past.

You! You said in an interview that “poems can be invocations…to surreal and dreamy ways of being”. What is the place of dreams in your work?

FI: Sometimes I pick up unfinished conversations in my dreams – these are so much more expressive and creative in the dream realm! Moreover, I feel that there is an intense silent observer in all of us, even when we have seemingly ordinary encounters. It is this observer who is surreal, poetic, dreamy. My work is influenced by all these factors.

You! What is your creative process for writing a poem? Does it vary with each piece you produce?

FI: A friend of mine once noticed that my poems seemed to have been written by different people. I think every poem asks you to bring out the palette, to put the paints together, to make careful choices of color and precision. I would like to say that each color breakthrough of a poem is unique.

My creative process – well, sometimes reality just isn’t enough to capture what’s going on around you or in your mind. This moment is open and you enter it transformed into a writer.

You! What are you going to work on next? How is it different from your previous work?

FI: I recently started compiling works for my new collection. If ‘The Shade of Longing’ was my first contact with readers, my new collection reflects a feeling that I want to share and express more. It’s less ambiguous and lasts longer than a candle flame. It also includes a piece of memory. I am truly very grateful for the careful and serious attention my poetry has received and it has encouraged and spoiled me to submit new poems. Working on this new book even feels like the next step in a relationship with “The Shade of Longing” readers.

A law graduate from SOAS, London, Taha Kehar is a novelist, journalist and literary critic. He is the author of two novels “Typically Tanya” and “Of Rift and Rivalry”.