FICTION: THE PRINCE OF CASANOVA – Journal 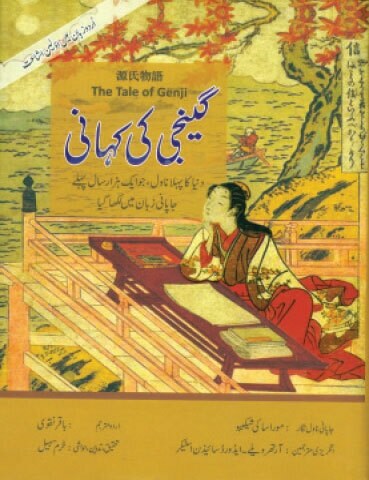 Genji Ki Kahaani [The Tale of Genji] is the Urdu translation of the Japanese classic Genji Monogatari by Murasaki Shikibu. The original was written – according to the book’s foreword – around 1000-1012 CE during the Heian Empire period (794-1185 CE) and reputed to be the first novel ever written.

The eminent scholar Baqar Naqvi and, after his sad demise, Khurram Sohail, undertook the task – given to them by the Pakistan Japan Literature Forum (PJLF) – to translate the story into Urdu. Their source material was the English versions by Arthur Waley and Edward Seidensticker. The result of this collaboration is a voluminous tome, covering 1,100 pages and very interesting to read.

The Tale of Genji, as it is known in English, has been translated into nearly every major language in the world, including modern Japanese. In Japan, the story has been featured in theatre, radio, television, film, cartoons and paintings. An image of the author and main character adorns the 2,000 Japanese yen note and an entire museum in Kyoto is dedicated to the book. Excerpts from the book are featured in school and university curricula, and there is hardly anyone in Japan who is unfamiliar with the story.

The author Shikibu (978-1014 AD), came from mid-level nobility and was chosen as lady-in-waiting to Empress Shoshi of Heian – likely due to her writing abilities. The author’s real name is unknown and he has been given names taken from his famous novel. She put her years in court to good use by writing the story of her fictional hero – Genji – and the Japanese Heian Empire at its height.

The story is quite simple, but told in a fun way. Genji is the king’s son, but his mother is of low status. The king loves Genji because of his extraordinary beauty and intelligence. However, the king is aware that the court will not accept the youngster as crown prince due to his mother’s low status. He therefore demotes Genji to commoner status, but takes care to endow him with great wealth.

An Urdu translation of a 1,100-year-old Japanese novel by a courtesan, believed to be the first novel ever written, is a tale not to be missed

Like the rich and noble young men typical of his time, Genji leads a life of luxury and falls into one love affair after another. Master of all the arts of seduction, he becomes a popular lover, adept at finding the best verse to embellish every situation and woo even a reluctant object of desire.

In the Heian era, all communications – from love notes to thank you notes – were written in poetry, and Genji has a great talent for selecting the most romantic couplets to send to his lovers. He just chooses the right paper, executes impeccable calligraphy, and then attaches it all to an autumn flower or leaf that completes the verse.

The addressee is required to respond in the same way. If she objects to answering, her ladies remind her that ignoring a properly written and decorated epistle from a nobleman is a social solecism.

Despite the virtual purdah of the noble ladies, Genji only needs a glimpse of a pretty woman through a fluttering curtain to be smitten. This is how he sees and falls in love with Fujitsobu, his father’s very young wife. Fujitsobu succumbs to her charm, but comes to her senses soon enough. However, the son she bears, who later ascends the throne, is actually Genji’s child.

At the height of his debauched lifestyle, Genji marries. It’s not a happy marriage for obvious reasons, and the lady dies shortly after the birth of their son.

Genji’s true love and soulmate is Murasaki, his second wife. Unfortunately, even his love does not prevent him from continuing his libertine activities and, at one point, he is exiled from the court after being caught in a compromising position. In exile, he has another meaningless banter that results in a girl. Murasaki dies quite young and his death shatters Genji. He retired from public life and died a few years later. This effectively ends the story of Genji and the last 12 chapters of the book are about his descendants.

The real beauty of The Tale of Genji lies in the virtuoso portrayal of the bustling Heian court. The author effortlessly follows the novel’s hundreds of characters and countless convoluted situations. His writing also conveys the supreme importance of aesthetics in ancient Japan: cherry and plum blossoms are valued for their beauty and fragrance, the colors of clothing change with the seasons, people’s beauty is highly valued and everything is executed with grace and art.

Shikibu gives us a woman’s perspective on court life around her. There is no war or politics in the book; rather, emotions and feelings play a big role in the novel. The interactions between men and women at the Heian court are laid bare. Women have an inferior position and are kept in seclusion, not speaking to or meeting men except behind curtains and screens. Men, on the other hand, have it much easier. They may marry several wives and also have a number of casual affairs. Women, on the other hand, are not expected to remarry even if they are widowed.

Women only learn the arts that add to their value in the marriage market. They can write in the new Japanese script, but not in Chinese. Familiar with the poetry of the time, they could compose couplets themselves. Playing the Koto – a stringed musical instrument – is considered an achievement.

Heian ladies also know how to participate in elaborate ritual ceremonies and design clothes with finesse for all occasions and all seasons. Hair – which is ideally long, thick and shiny – is a very big part of their beauty and they know how to show it off. Finally, they are experts in choosing gifts for every occasion and lavish gifts are constantly exchanged.

Genji Ki Kahaani is a romantic novel written by a woman over 1,100 years ago, but it was never considered a feminine narrative or a frivolous romance. On the contrary, it enjoys constant popularity almost from the beginning.

It’s also worth noting that Shikibu was known as a writer by her female name. Compare that to Victorian England over 700 years later, where female authors were forced to write under male pseudonyms – Mary Ann Cross, for example, published her work under the name George Eliot, in order to be taken “seriously”.

What is most endearing in the novel is its human side. Human nature remains the same in time and space and that is why Genji Ki Kahaani retains its freshness and immediacy. The reader discovers that the parents were as eager to make good marriages for their daughters at the court of Heian as they are now, and torment themselves over the fate of their helpless dependents as the people. The attraction of beauty, music and manners is also universal and eternal.

It is indeed a service rendered to Pakistan that this book has been translated into Urdu. The reader is brought closer to Japan than ever before due to the similarity of feelings exhibited by the characters. We find that, as different as Japan may be from us, we are humanly alike.

Congratulations to the translators, Baqar Naqvi and Khurram Sohail, who did a colossal job and presented us with a very readable book. It must not have been easy, as not only was the prose translated, but literally hundreds of verses were also translated into Urdu.

The translation could have benefited from tighter editing, although mistakes in a book of this size are forgivable. However, sometimes it is not clear who the pronoun is referring to because the genders of the verbs are mixed up. English words such as ‘lady’, ‘control’ and ‘master’ – which have easy equivalents in Urdu – slipped unnecessarily into the translation. But these are minor flaws in a work that brings a classic Japanese story to Urdu readers for the first time.

It would be a shame if the size of the book deterred people from reading it. Genji Ki Kahaani is a tale not to be missed. Of course, in an ideal world, translations can be abbreviated to make them more accessible; maybe the PJLF can make it its next project.

The critic is a freelance writer, author of the novel The Tea Trolley and translator of Toofan Se Pehlay: Safar-i-Europe Ki Diary