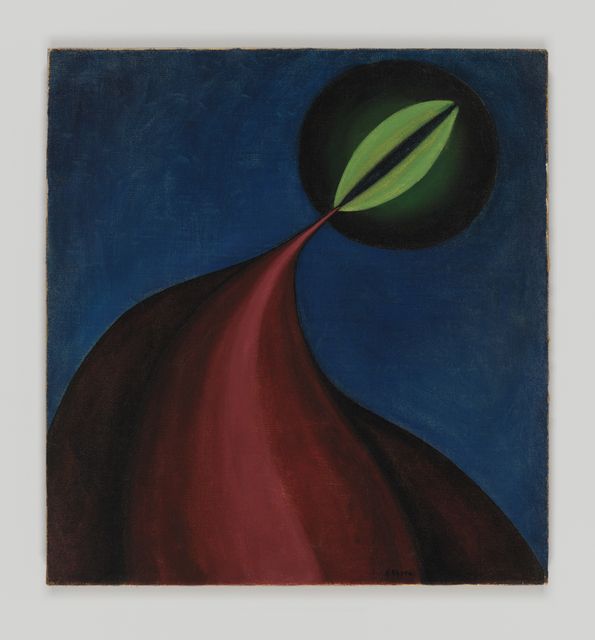 A hundred years ago, American life was modernizing at a dizzying pace. The automobile and the telephone became widespread and electrical networks revolutionized urban life, while the world of ideas was transformed by Freudian psychology and Einstein’s theory of relativity. “Dawn of a New Age: Early Twentieth-Century American Modernism,” a new exhibition opening May 7 at the Whitney Museum in New York, examines this dynamic era through an in-depth look at its art. More than 60 works – paintings, drawings, sculptures, prints and photographs – represent more than 45 artists, from famous names like Georgia O’Keeffe and Stuart Davis to less familiar figures of that era whose work only entered the collection only recently or has languished in storage, unseen for decades.

“At the Whitney, we’ve definitely started to expand what we present as America’s story,” said exhibit curator Barbara Haskell. American art of early modernism “was not just the story of a few great masters,” she added. “There were so many more artists who were important.”

Take the painter Henrietta Shore, a contemporary of O’Keeffe. “Critics at the time spoke of the two of them in the same breath,” Ms. Haskell said, “some of them even preferring Shore’s work.” Shore’s “Trail of Life” (circa 1923), acquired by the Whitney this year, is one of the first paintings to welcome visitors to the exhibition, alongside canvases by Marsden Hartley, Agnes Pelton – the subject of a Whitney solo exhibition in 2020 — and Oscar Bluemner.

“Most American Modernists spent time in Europe, but their creative breakthroughs occurred largely after returning home.”

Most American modernists spent time in Europe, but their creative breakthroughs came largely after they returned, Ms. Haskell said. Those who stayed on this side of the Atlantic absorbed European art from afar, filtering new movements and ideas through a quintessentially American sensibility. In ‘Untitled (Bathers)’ (circa 1917), Philadelphia-born artist Carl Newman fills the canvas with elements that ‘make no sense together’, Ms Haskell said, such as nude figures and a rainbow -sky, a boat and a mountain range. The mashup “exudes a youthful, unconscious innocence. It’s as if he had no inhibitions about what he could or could not paint. The same could be said of Florine Stettheimer, who “breaks all the rules by filling her paintings with feminine colors, ornaments, excess and fantasy”, defying “all standards of ‘serious’ art”.

In New York, German émigré artist Winold Reiss taught Hawaiian-born artist Isami Doi and Harlem Renaissance powerhouse Aaron Douglas. The influence of Reiss’ bold and bold graphic style is evident in Doi’s 1924 “Moonlight” linocut and in three Douglas woodcuts from 1926 depicting scenes from Eugene O’Neill’s play “The Emperor Jones”. . With the Doi and Douglas prints hanging side by side, Ms. Haskell said, “you can almost see the dialogue between these two artists.”

Many artists on the show used color shamelessly, including Oscar Bluemner, who came to the United States from Germany as a young man in the 1890s. In Europe, “Kandinsky and others had argued that colors had parallels in emotions,” Ms. Haskell said, and Bluemner agreed. “But the simplicity of his forms and the hypersaturated quality of his colors”, as in the landscape “Space Motive, a New Jersey Valley” (1913-14), “give his paintings an unusual audacity and dynamism”, notes- she, for the point that works by Kandinsky and his entourage “seems almost tame in comparison”.

Some artists fused modernist approaches with their own cultural traditions. Bay Area artist Chiura Obata produced ink and watercolor sketches of Yosemite and the High Sierra; on a trip to his native Japan, he used them to create a portfolio of woodblock prints, depicting what he called the “great nature” of America in intense, expressive color. In “Street Scene” (1926), Chinese-born artist Yun Gee interpreted the energy of San Francisco’s Chinatown as a rhythmic rush of color and softened geometric shapes. When asked why he doesn’t use classical Chinese painting techniques, Gee replied, “Because I live in a modern industrial society.

Abstraction proved surprisingly well suited to the optimism of the time. Like the music itself, the organic flow of color in O’Keeffe’s “Music, Pink and Blue No. 2” (1918) carries an emotional intensity beyond conscious thought. ‘Noise Number 13’ (1925) by poet EE Cummings – who considered himself as much an artist as a writer – is a dizzying whirlwind of color that, as Ms Haskell puts it, ‘ignores aesthetic decorum’.

For Ms. Haskell, the exhibition is an opportunity to reassess and expand not only Whitney’s collection, but also her vision of a pivotal time in American art. “It’s happening in museums all over the country,” she observed. “There’s a realization that museums didn’t reflect America, and that had to change.” With its mix of iconic works, recent acquisitions and rediscoveries, “Dawn of a New Age” is set to tell what it calls “the most exuberant story of this period”.