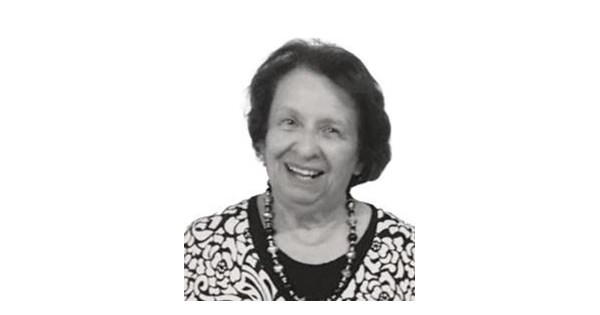 Esther (Tess!) Souza McCune, friend, poet, educator and pillar of her family and community, died on January 1, 2022 at Saint Francis Hospital in Hartford, Connecticut, at the age of 91. Her life began on May 14, 1930, when Joseph and Celia Souza were lucky enough to have their first child, Esther Marie Souza. His grandfather, Reverend Antonio Souza, was born in the Azores Islands in Portugal, received his theological degree from Boston University, and became an ordained Baptist minister. Joe and Celia raised Esther and her brother Raymond in a house full of faith and love of music. After graduating from East Providence HS in 1948, Esther studied at Bryant College in Providence, RI, then moved on her own to Hartford CT to work as secretary for the Connecticut Baptist Convention Office. For fun, she joined a folk dance group, where she met her future husband. At 24, she married Dr. Robert F. McCune, professor of physics at Trinity College, and they traveled to Pennsylvania. Dr McCune taught physics at Bucknell University while Esther, a coloratura soprano, studied opera and performed as a soloist with the Bucknell Symphony Orchestra. Once ready to start a family, they returned to Connecticut and bought their home in Glastonbury where some of their friends were already residing. Their community of young families loved folk dancing, books, church, camping and singing. Very early on, friendships were formed that lasted a lifetime. In 1977, when Esther’s daughters were only teenagers, her husband Robert died. Esther and the girls were grateful for the loving support of friends and the caring church community. South Glastonbury Congregational Church has been a spiritual home for Esther for all these years. Esther continued her education at the University of Hartford and Central Connecticut State College (CCSC), earning a BA in English with a teaching certificate. In 1972 she graduated and began her career as an English teacher at Glastonbury High School. Esther’s passion for learning led her to earn two graduate degrees, a Masters in English from CCSC with a thesis subject by James Joyce, and a Masters of Arts in Liberal Studies (MALS), a interdisciplinary degree from Wesleyan University. Later, his summer seminars at Yale became a Fulbright for China and a passion for Zen. Music was a constant in Esther’s life. She sang in the church choir, composed music, performed in faculty musicals and always kept abreast of pop, classical, musical theater and opera. Her 25 years of teaching at Glastonbury High School have been a joy for Esther, sharing her ideas on existentialism and symbolism. James Joyce’s short story “Araby” was a favorite that she included in many lessons. And she loved incorporating music and movies into her lesson plans, including The Wall by Pink Floyd. She was so happy over the years that former students often expressed their gratitude to her. After retiring from teaching in 1997, the years have been filled with writing, travel, poetry readings, and the joys of friends and family with weekly breakfasts for women and celebrations of monthly birthday for friends. The writing groups included the Russell Writers of Middletown, Meetinghouse Poets, Wethersfield Poets and Writers Out Loud, an open mic group. Its reading groups included the Book Babes, River Readers and the “Bookies” – a Southern Congregation reading group that has met for over 40 years! She enjoyed going to the theater, museums and coordinating opera outings with her friends at the Metropolitan Opera Live in HD. Until 2021, she continued her lifelong learning, including chair yoga, Qi-Gong and belly dancing lessons. His trips included Chautauqua, Memorial Weekends on the Cape and beyond, to the UK, Scandinavia, Russia, Germany, China, two weeks in a charming apartment in the Parisian village of Montmartre, Israel and Palestine, and in Morocco (camel ride included). Outings and trips were shared with dear and adventurous friends. And somewhat decadent, chocolate desserts were always there! Sharing memories of Esther’s rich and beautiful life brings comfort to her family and friends. She will be sadly missed by daughter Karen McCune Barca of Everett, MA, daughters Lynn McCune and Janice McCune, both of New York, NY, and cousins ​​Herb Souza of Florida, Anne Cassens of North Carolina and Barbara Slater of Rhode. Island. Esther, aka “Grandma Tess”, will be missed by her grandsons Jeffrey and Dylan of Everett, MA, and her grandson Matias and Matias daughter Tizara of Lynn, MA. Esther leaves behind cousins, nieces, nephews, extended family, and circles of friends so loved they were family. The family invites you for a Zoom service at 2:00 pm on January 22, 2022. Contact the South Congregational Church office for details at (860) 633-4651. For online condolences, please visit www.mulryanfh.com A private cemetery ceremony will take place after the spring thaw at Old Church Cemetery, Main Street, Glastonbury, CT. Save May 14, 2022 at 4 p.m. for a Celebration of Life at South Congregational Church, Main Street, South Glastonbury, CT. Don’t forget Esther by writing a poem, singing a happy song, and donating to the South Congregational Church Music Committee in South Glastonbury, CT and the Welles Turner Library in Glastonbury, CT.