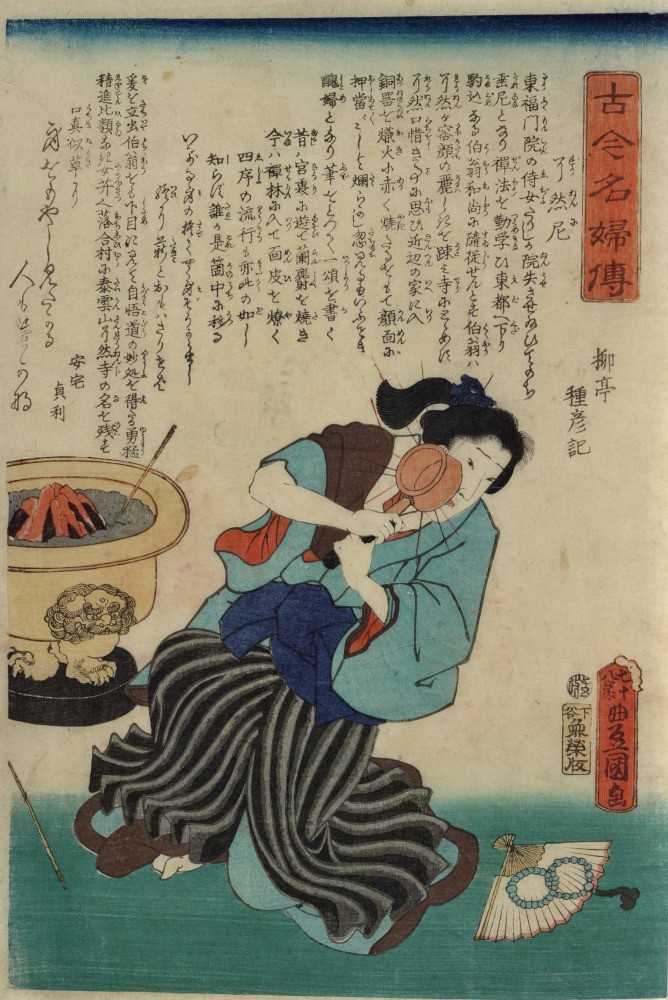 “Why were there no great female artists?” writes Linda Nochlin in her influential feminist art history essay from 1971.

Throughout history across the world, women have faced cultural, social and institutional barriers to becoming great artists in patriarchal societies. Despite their talent, they have been systematically underrepresented and excluded from the male-dominated canon of art history.

This is especially true in pre-modern Japan, during the Edo period (1603-1867), where women occupied a subordinate role dictated by Confucianism’s “Three Denominations” – the principle that women should obey their father, husband and son. However, despite these strict gender roles and societal restrictions, some notable women have overcome these barriers to leave their mark on Japanese art history.

Their legacy lives on in the Denver Art Museum’s latest exhibit, “Her brush: the Japanese women artists of the Fong-Johnstone collection”, which opened on November 13. 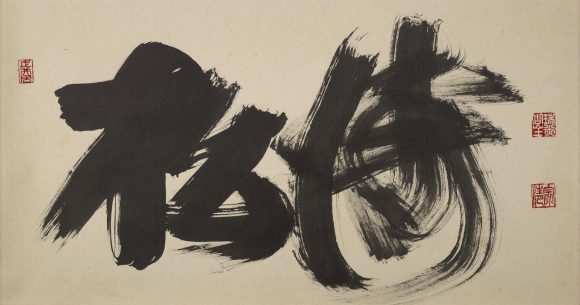 “It’s an exploration of how art can be a vehicle for empowerment, a form of taking a place as a woman in a patriarchy, and how these artists, through their art, have inscribed themselves into our present,” said Dr. Einor Cervone, associate curator of Asian art at DAM and co-curator of “Her Brush.”

“Her Brush” is the largest exhibition in the United States of premodern Japanese women artists in more than three decades – since Patricia Fister’s “Japanese Women Artists 1600-1900” exhibition at the Spencer Museum of Art at the University of Kansas in 1988.

Many of the works by “Her Brush”, donated from the private collections of Dr. John Fong and Dr. Colin Johnstone in 2018, will go on public display for the first time in centuries.

Many of these premodern female artists received little or no recognition, even in Japan. This is the result of a variety of historical and contemporary factors, including the lack of archival records of their life and legacy and the anti-feminist bias present in many art institutions in Japan.

After a wave of feminism shook the art world in Japan in the 1990s, a widespread conservative backlash started in the early 2000s, making it increasingly difficult to use the words “feminism” and “gender, according Stephanie Su, Assistant Professor of Asian Art History at the University of Colorado at Boulder. Su’s research includes global modernism, historiography, and the history of collecting and exhibiting in modern Japan and China.

On Nov. 3, Su appeared alongside Cervone and Patricia Graham, a research associate at the Center for East Asian Studies at the University of Kansas, for a panel on DAM’s “Her Brush” and the role of female artists in the art world of the 17th century. in modern times. The panel, titled “Outstanding Japanese Women Artists and Craftswomen in a Male-Dominated World,” was organized by CU Boulder’s Center for Asian Studies and the Department of History.

“A lot of institutions don’t like the term feminism,” Su said. “They think adding a gender perspective imposes Western ideas on Japanese culture. Second, many [contemporary art critics] I think there are no great female artists [from the past]. They believe it to be a historical truth. As a result, many academics feel their work is not valued. 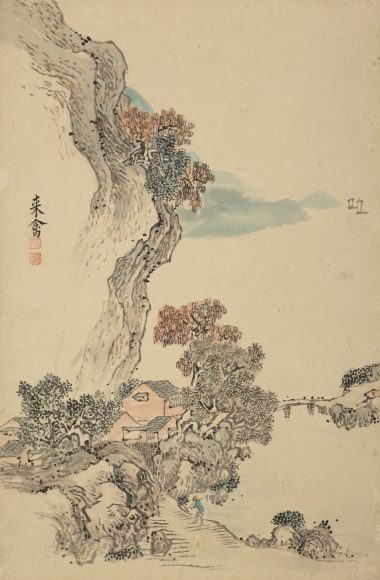 Despite this prejudiced perspective in many traditional Japanese institutions, art historians and curators in America and other countries around the world have worked to challenge the gender status quo in Japanese art history. .

“Her Brush” marks a milestone for this movement. The exhibition, divided into seven thematic sections, contextualizes the work of women artists according to their identity and social class, rather than by theme or era. The first section, “The Inner Rooms” (ōoku 大奥), illustrates how upper-class women born into elite and wealthy households were trained in the “three perfections” (poetry, painting, and calligraphy) to entertain at court and be a suitable companion. for their future husbands. Although most were amateur artists, a few exceptionally talented and resourceful aristocratic women became professionals.

Another section, “Taking Tonsure” (shukke 出家), presents the work of Buddhist nuns. In the Edo period, although they had even fewer rights than monks, nuns enjoyed greater social status and autonomy than lay people. This allowed them to freely pursue their passion for art. The other sections intertwine various identities, including women born into the craft as “Workshop Girls”, intellectuals from “Literary Circles” (bunjinga 文人画) and musical performers (geisha 芸者), actors and sex workers in “Floating Worlds” (ukiyo 浮世), state-sanctioned entertainment districts.

Despite the diversity of experiences of these women, their perseverance and ingenuity are a common thread across social classes and eras.

“A lot of artists [in this exhibit] show what it means to live a life without barriers,” Su said. “Their stories can be very inspiring to everyone, especially those who have faced many challenges in life.”

Buddhist nun Rengetsu, widely regarded as one of the greatest Japanese poets of the 19th century, faced many hardships throughout her life. At the age of 13, she lost her adoptive brother and her mother. Over the next 30 years, most of her close family members died, including her four children, two husbands, and two adopted siblings. When her adoptive father died, she left his temple and began selling pottery decorated with his poetry to support herself. His masterful work was soon in great demand. DDuring his lifetime, it was said that every household in Kyoto apparently had at least one of his pottery works.

The “Take the Tonsure” section reflects the importance of Rengetsu’s legacy. The centerpiece of this section, Rengetsu’s “Journal of Travel to Arashiyama (Arashiyama hana no ki)” from the 1800s, features loosely brushed poetry, interspersed with minimalist illustrations. This diary offers an intimate insight into his personal life. Nearby, an imaginary portrait of “Rengetsu working in his hut” appears, painted 60 years after the artist’s death by Suganuma Ōhō 菅沼大鳳 (1891-1966) as a tribute to his legacy. 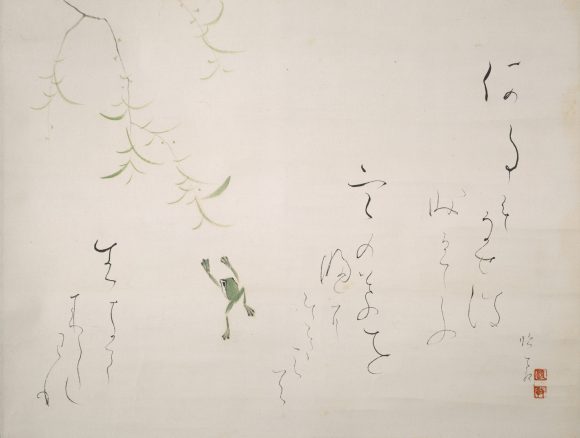 This section also presents the works of Ōishi Junkyō 大石順教 (1888-1968), known as the Mother of the Handicapped, who established herself as a gifted missionary, social worker and artist. Junkyō was recognized for her mouth-drawn paintings, a style she adopted to adapt to having both arms amputated – the tragic result of an attack by her adoptive father when she was a teenager.

In “Her Brush”, Junkyō’s work “Willow and Frog” from the mid-1900s depicts the uplifting story of courtier Ono no Tōfū 小野道風 (894–964). After failing to get a promotion seven times, Tōfū wanted to quit – until he found inspiration in a determined frog, who was trying to jump on a willow branch. The frog failed seven times, before finally succeeding on his eighth attempt, inspiring the courtier to persevere and eventually become a successful statesman.

The final section of the exhibit, “Unstoppable (No Barriers),” features another Buddhist nun with an inspiring story: Murase Myōdō 村瀬明道尼 (1924-2013). Myōdō, who lost her arm and the use of her right leg in a traffic accident in her late thirties, refused to let physical limitations hold her back from her creative pursuits. During her recovery, she learned to use her left hand to create masterful calligraphy. His work “Mu (No or Nothing)” and “Kan (Barrier)” (無関), featuring the two figures painted on opposite sides of the table screen, offers a visual representation of the expansion beyond beyond physical limits. 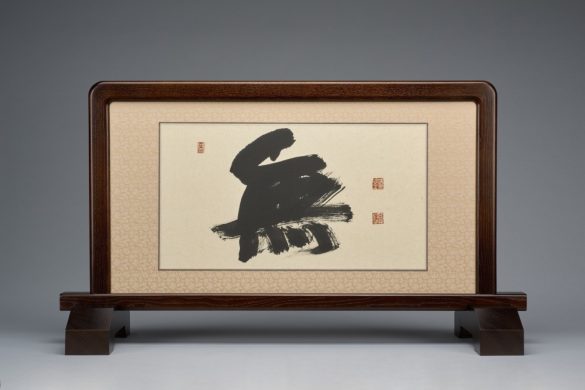 “Mu (no or nothing) and Kan (barrier)”, Murase Myōdō (Courtesy of Denver Art Museum) 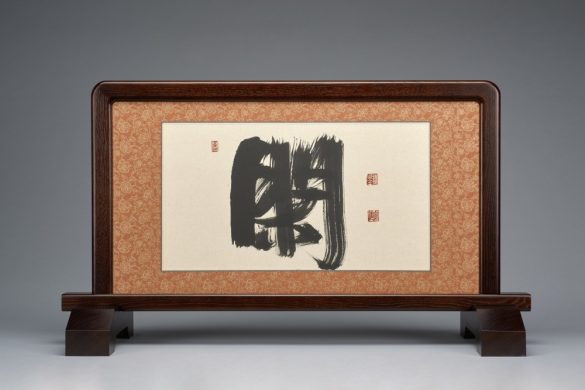 “Mu (no or nothing) and Kan (barrier)”, Murase Myōdō (Courtesy of Denver Art Museum)

The inspiring stories of these three women and others can be found on collectible tanzaku (colored poetry sheets), designed by a Denver-based artist. Sarah Fukami, in several places of the exhibition. Traditionally, tanzaku, written by men and women of different social classes, were given as gifts – or hanging on bamboo branches during the holidays to make wishes come true. Fukami’s modernized tanzaku, intended to appeal to younger audiences, are formatted as a trading card with the artist’s portrait and a short biography in English and Spanish.

“We hope that this exhibition can be aimed at people of all ages,” said Karuna Srikureja, Associate Interpretation Specialist for DAM’s Asian Art Department. “Maybe we can trigger [interest] in young girls. They can become big fans of Japanese artists and grow up with these personalities in mind. 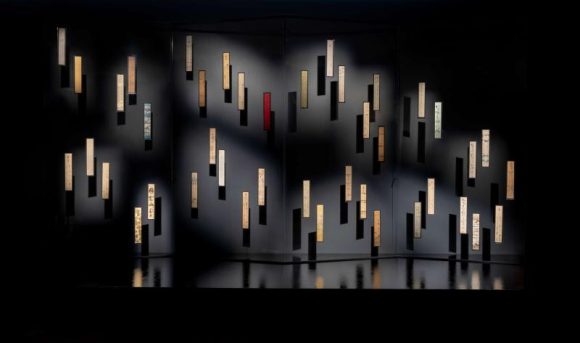 Another interactive element of the exhibition includes a large projection screen on the final wall, inviting visitors to create their own ephemeral calligraphy.

“We try to convey the notion of the brush as an extension of the body,” Cervone said. “We want to help visitors embody and experience physically and viscerally the idea of ​​leaving a mark through art.”

Through this, Cervone hopes visitors will be able to connect with the power of the brush as a force for self-expression and agency – just as these Japanese women did centuries ago.

“It’s a way to register in our presence,” Cervone said. “It’s a remarkable and bold act to take your place as a woman. This notion of leaving a brushstroke is a way of deciding that your artistic voice is important enough to be heard.

“Her Brush: Japanese Women Artists the Fong-Johnstone Collection” will be on view from November 13 to May 13, 2023 in the Bonfils-Stanton Gallery on Level 1 of the Martin Building at the Denver Art Museum. The exhibit is included in general admission.