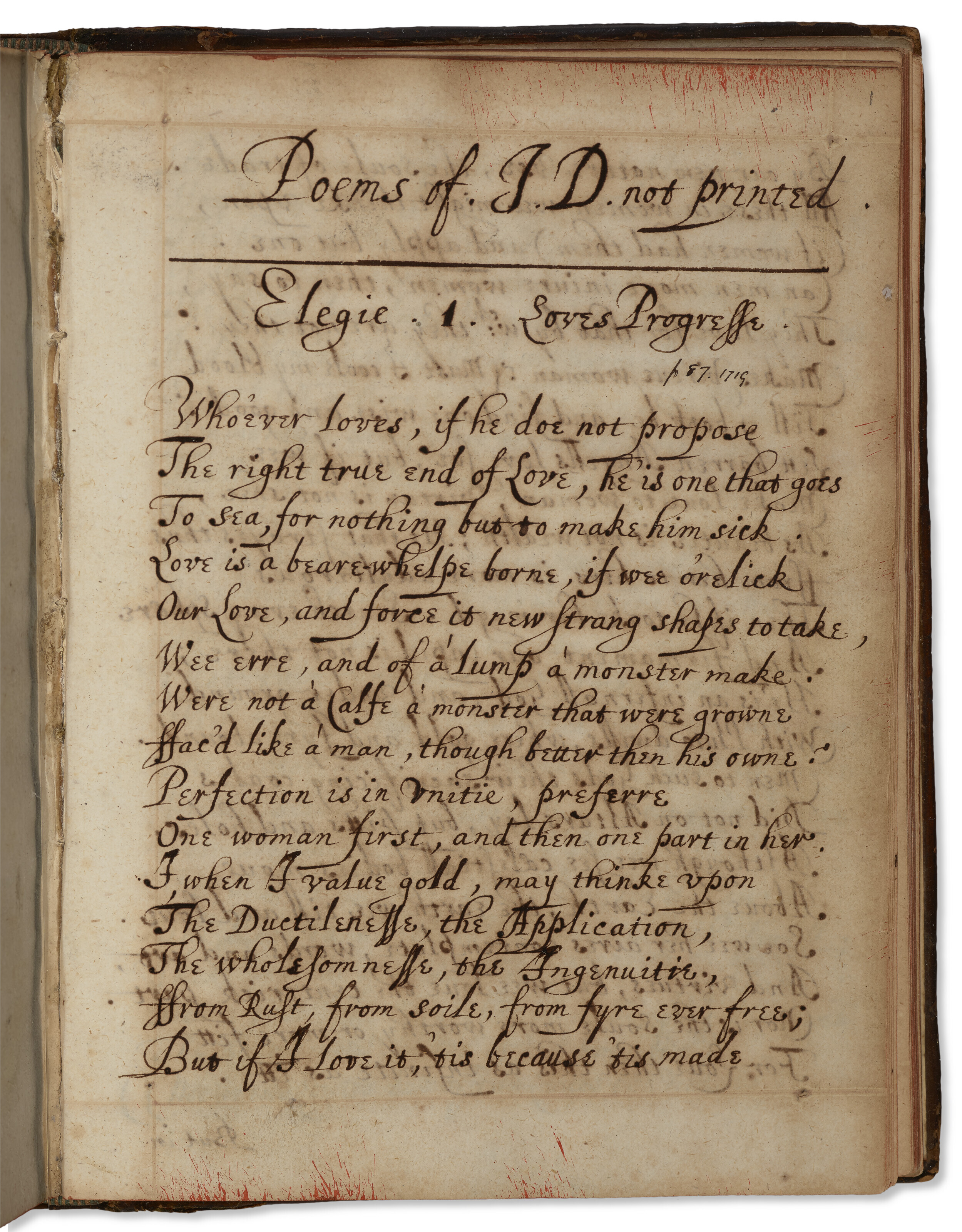 Berland Donne’s manuscript. A very important volume of Donne’s poetry and prose containing contemporary manuscript sources of works omitted from the collected editions of 1633, including several elegies. One of the only sources Gives in private hands.

A remarkable sammelband containing the first editions of Donne’s Poems and Early works (both with corrections and corrections in a contemporary hand), each followed by a manuscript collection of texts omitted from these editions. Berland’s sammelband is one of Donne’s last manuscript sources still in private hands. Most of Donne’s verse and much of his freer prose works, deemed unsuitable for publication during his lifetime, circulated widely in manuscript form before the posthumous collected editions. The many manuscript sources (divided into several groups according to their completeness and relative authority) are listed in the Variorum Edition of the Poetry of John Donne, ed. G. Stringer et al, vol. 1. For further information on the content and textual meaning of Berland’s manuscript, see John T. Shawcross, “Notes on an Important Volume of Donne’s Poetry and Prose”, in John Donne Journal, 9:2 (1990), pp.137-139.

The first group of handwritten verses follows Poems. Comprising 17 pages, it includes the elegies numbered 1 to 5 and “Lecture Upon a Shadow”. Donne’s elegies, almost all written in the 1590s, are modeled on those of Ovid Loves; rather than a funeral lament, these discursive poems are ingeniously witty and decidedly erotic – as in Elegy 19, “To His Mistress Going to Bed” (currently numbered Elegy 5), which includes his famous conceit in which caressing a naked lover is lined up with exploration in America: “O my America! My new land, / My kingdom, safelist when with one man, / My gem mine, my empire, / How blessed am I in this discovery!” The elegies in the present manuscript are all attributed with certainty to Donne and include elegies omitted from the collected edition of 1633, although they were probably present in the manuscript used as the copy text for this edition. Shawcross notes that the “Reading”, included in all of the Group I manuscripts, was probably inadvertently omitted from the 1633 edition, and points out that the texts in Berland’s manuscript have affinities with those of the Stephens Ms. in Harvard College Library (Ms. Eng. 966/6), a source which also includes non-canonical poems not present here. Berland’s manuscript shows a number of differences in punctuation and significant textual variations, one appearing in the first verse of Elegy XVI, which here reads “straung” rather than the “strange” reading found in the most sources, and now generally accepted. Other differences are noted in the variorum edition.

The second group of handwritten verses follows Early works. Also running 17 pages, this includes eight issues and “A Dunce’s True Character” and “An Essay at Bravery”. Donne’s “problems” were brief essays – “nothings”, as he called them – which “carry with them an admission of their levity”. They were composed, writes the author in a letter to Henry Wotton, “rather to deceive time than his daughter the truth”. The manuscript works were all added to the 1652 third edition of Early works (Keynes 45) and Shawcross speculates that this manuscript “may have been … the copy text used for 1652 or related to the manuscript which became a source”. Additionally, Berland’s sammelband is important for its inclusions and exclusions, which can provide guidance for the authoritative determination of canonical works and questionable or non-canonical works. Shawcross argues that “the canonicity of the changes made to the [printed] exempla and poems and problems in both manuscript collections point to the canonicity of “The True Character of a Dunce” and “An Essay of Valour” (the canonicity of both of which has been questioned).

The manuscripts are bound with the first editions of PoemsDonne’s main collection of poetry, which appeared two years after his death, and Early works. Poems is also notable for containing the first appearance of several famous Donne elegies, that of Izaak Walton (“Is Donne, great Donne deceas’d?…”), and Thomas Carew’s famous elegy beginning “Can we not force from widdowed Poetry Now art thou dead (Grand Donne) an Elegy to crown thy hearse?…” which ends with the famous epitaph “Here lies a king, who ruled as he saw fit The universal monarchy of spirit…” This copy with sheet Nn1r in its earlier uncorrected state (running head omitted to accommodate 35 lines of verse). With corrections and textual corrections in a contemporary hand in nine of the poems and with deleted text restored in Satires II and IV (two words: “godes” and “letanie” added in 2V1v, four lines restored in 2V2 in Satyr II, three lines on Xx3r of Satyr IV). Grolier Given 81; Grolier English 25; Hayward 54; Keynes 78; STC 7054.

Early works contains 11 of Donne’s paradoxes and 10 of his problems. The collection, expanded in later editions, is usually bound to the Poems of the same year. In this copy F1v and H4v are empty; in some copies Henry Seyle’s brief print license is added (Keynes saves copies with both, one and the other of the licenses present.) Grolier Donne 26; Keynes 43; STC 7043.

16 works of poetry and prose as follows:

To manuscript. The 17-page manuscript supplement after Poems understand :
1. Elegy 1 [XVII] Love’s Progress (“Who ever loves, if he doesn’t come up with the true fair end of love…”)
2. Elegy 2 [XVI] [On his Mistris] (“By our strange and fateful first interview, By all the desires that resulted from it,…”)
3. Elegy 3 [XI] [The Bracelet] (“Not that in color it was like your hair, armbands you can still let me wear…”)
4. Elegy 4 [XX] [Love’s Warre] (“Until I have peace with you, I have other men, And when I have peace, can I leave you then?…”)
5. Elegy 5 [XIX] [To His Mistris Going to Bed] (“Come, lady, come, all rest defies my powers, until I work in the laundry of work…”)
6. Lecture on a shadow. (“Keep still, and I’ll read you A lecture on love in the philosophy of love…”)

Handwritten prose. The 17-page manuscript supplement after Early works understand :
1. Problem XI. Why does the Pox affect so much to undermine the nose?
2. Problem XII. Why don’t you dye anyone for Love now?
3. Problem XIII. Why do women love feathers so much?
4. Problem XIV. Why doesn’t gold feel the fingers?
5. Problem XV. Why do the great men, of all addicts, choose to preserve Bawdes?
6. Problem XVI. Why are courtiers sooner atheists than men of other conditions?
7. Problem XVII. Why are statesmen most incredulous?
8. [Problem I. Why have Bastards best fortune?] A section of text “wanting in the first printed issue”, as published in 1633.
9. The true character of a dunce
10. A trial of valor.