Colors belong to everyone: The Tribune India 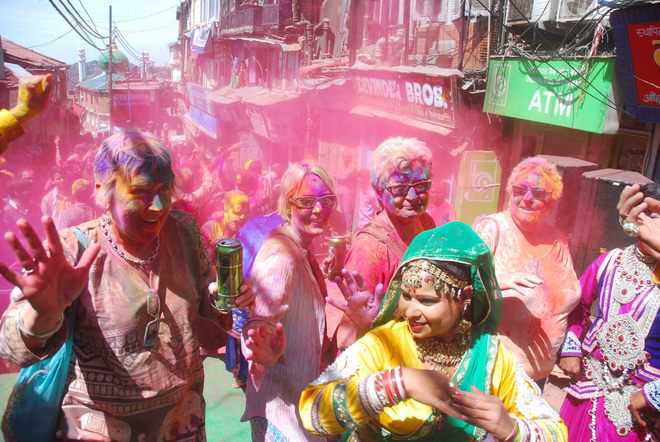 Every Holi, I remember my Arabic teacher and mentor, Dr. Zaifa Ashraf, who lived with me in Pune until his last breath. An atheist, she left Islam at the age of 17 and was not religious. But she was looking forward to celebrating Holi. She believed that all festivals were non-denominational and beyond the confines of man-made religions. She bought pichkaris and colors and visited a nearby orphanage where she played Holi with inmates and gave them sweets. I carried on the colorful tradition even after it passed away. With age and the advent of a little more maturity, I understood his words, ‘Jashn-e-cheest-farakh-dili’ (Party is magnanimity). So true!

In these times of intolerance, the liberalism and magnanimity of all parties should be recognized and praised. I remember playing Holi with my Muslim friends in countries like Sudan, Tunisia and Algeria. These Arabic-speaking Muslims from North Africa never questioned the relevance of a “Hindu festival”! For them, it was a festival of colors that filled lives with countless and varied colors. There has never been a religious tinge. All Sufis celebrated Holi and called it jashn-e-faam (faam is a Persian word for color/s). They never associated it with the Hindus. Once Jalaluddin Rumi’s disciple Halim ul-A’afiz called Holi ‘ahnaaf-e-butparastaan’ (a festival of idol worshippers). Rumi was disappointed with Halim who said in Pahalavi, ‘Kee’n an jashn meez al-butaan/Na’zif inn un-shifaan’ (Oh, unenlightened soul, how can you associate a harmless festival with idolaters? ). Rumi went on to say that the favorite festivals of angels were Shab-e-charaghaan (night of lamps) and Jashn-e-faam (festival of colors).

The great Urfi of Shiraz, who was a Persian poet in the court of Akbar, came out with colors and played with everyone in the streets of Delhi. He successfully urged Akbar and his Muslim courtiers to participate in the festival of colors. Akbar loved to play Holi and he played it with commoners! Even a forever ashen-faced Aurangzeb didn’t stop the people of Delhi and the Deccan from playing Holi as he saw the festival of colors as emblematic of bonhomie!

Now, when people and their festivals are divided along lines of creed and screed, the magnanimous spirit of not only Holi, but all festivals can balm the festering wounds of bigotry and rabid intolerance that plague us. have swallowed up. Remember the words of Urdu poet Qateel Shifai, “Mazhab nahin hota koi rang aur roshni ka/ Sarhadein rok nahin sakteen rangon ko bikharne se” (There is no religion of colors and light/ Borders cannot not prevent the colors from spreading and spreading in all directions). If only we all understood this.